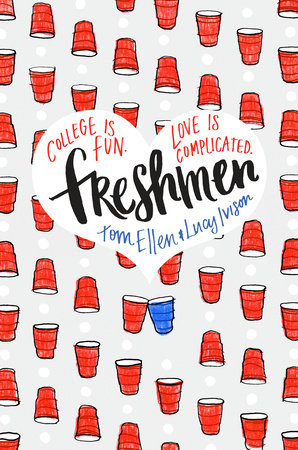 By Tom Ellen and Lucy Ivison
A laugh-out-loud, realistic portrayal of a freshman year in college for fans of Emergency Contact, Broad City, and The Bold Type.

Getting in is just the beginning.

Phoebe can't wait to get to college. On her own, discovering new things, no curfew . . . she'll be free. And she'll be totally different: cooler, prettier, smarter . . . the perfect potential girlfriend. Convenient: the only person from her high school also going to York is her longtime crush, Luke.

Luke didn't set out to redefine himself, but as soon as he arrives on campus, he finds himself dumping his long-term long-distance girlfriend. And the changes don't stop there. . . .

Just when things start looking up (and Phoebe and Luke start hooking up), drama looms on the horizon. Rumors swirl about the Wall of Shame, a secret text chain run by Luke's soccer team, filled with compromising photos of girls. As the women on campus determine to expose the team and shut down the account, Luke and Phoebe find themselves grappling with confusing feelings and wondering how they'll ever make it through freshman year.

Are You Ready for Freshman Year?

I was doing my best to focus on what Arthur was saying, but the buzzing in my pocket kept distracting me.

If I’d counted right--and I was pretty sure I had--this was the eleventh buzz since we’d arrived at the Jutland school’s bar for the clothes swap party. The eleventh. A sudden rush of anger cut through me. Did she really expect me to spend the first night of freshman orientation standing outside talking to her? Wasn’t the whole point of this week to talk to new people?

The buzzing stopped as Arthur pushed a luminous blue shot and a pint of lager along the bar to me. He was wearing a bright-red bathrobe over a sleeveless denim jacket, his sweaty black hair messily tucked into a yellow swimming cap. I had on my mum’s 2007 Bon Jovi tour T-shirt under a massive multicolored Mexican poncho. We both looked absolutely ridiculous. But then, so did everybody else. Even the bartender was wearing a kimono.

The DJ yelled, “Jutland, make some noise!” and I realized Arthur’s mouth was moving again, so I leaned in and tried to concentrate.

“I was supposed to live off-campus this year,” he was shouting over the music. “Me and some friends had a house and everything. Even put the deposit down.”

“So what happened?” I yelled back.

“It got fucking condemned. Like, literally, two weeks ago. Asbestos. So that’s why I’ve ended up back in B Dorm next door to you.” He did his shot and winced. “Still, could be worse. Most second years don’t get to do Frosh Week twice, do they?”

I nodded and drank my shot. It tasted like vodka-flavored toothpaste. “What is asbestos?” I shouted.

Arthur downed half his pint in one go. “It’s this sort of invisible presence that lives inside your house.”

“A bit, actually, yeah.” He nodded. “But Wi-Fi that silently kills you in your sleep.”

The Klaxon horn went off, and he shrugged out of his bathrobe while I gave him my poncho. The bartender started lining up more blue shots on a tray as Beth came over with Barney. Or maybe it wasn’t Barney. Was it Tom? Tom also had red hair. It might have been Tom.

“Just seeing if you guys needed a hand,” said Barney-Not-Tom cheerfully. He was short and skinny with a soft country accent and tons of orangey freckles. Beth was almost a foot taller and had a sort of strict “valedictorian” vibe about her that was nicely accentuated by the Harry Potter robe she was wearing.

“One, two, three, four . . .” Arthur clamped the shots one by one between Barney’s fingers.

“I’d rather have a gin and tonic than another of those shots, to be honest,” Beth said sharply. “They’re like drinking Listerine.”

“No worries,” said Arthur. “One G and T coming up. We’ll bring it over with the rest of them.”

Arthur leaned in to me as they walked back to the table. “You wanna watch that Barney, by the way.”

“He’s a labeler. I saw him putting a Post-it note on his Nutella. We had a labeler in our hall last year. Total nutjob. Got kicked out in the second semester for shooting a squirrel with a BB gun. He was a chemistry major, too.”

“Barney’s studying geography, though, isn’t he?” I’d only managed to remember that because me, him and Arthur were the only ones not doing chemistry in our hall.

Arthur finished his pint and slapped the plastic cup back down on the bar. “Yeah, well, it’s all the same Big Bang Theory ballpark, isn’t it? Except that geography is basically just coloring in. What are you doing, again?”

“Yeah.” He ran a hand across his patchy black stubble. “I’m wrestling with the big-boy questions: What is the nature of truth? How can we find meaning in a Godless universe? How hot is that girl chatting with the DJ?” I looked at the girl in question, who was indeed hot. He picked up the tray, which was now dangerously overloaded with drinks. “Shall we get back?”

My pocket started buzzing again. Number twelve. I pulled my phone out. “I’ll be there in one sec. Sorry, man, just need to quickly get this.”

I slipped out the main door and the cold hit me hard. I pressed the phone to my ear. “Hey.”

“Hey.” Her voice sounded wrinkled and far away. The way it’d sounded pretty much all summer.

“OK. Have you met anyone nice?”

“The people in my suite in my dorm are all right. They’ve pretty much only talked about chemistry so far, because that’s what they all want to major in, but they seem nice. And this one guy Arthur seems cool. He’s a sophomore, though.”

“That sounds good. Cool. I . . . I just wanted to check everything was OK. It felt like we didn’t really sort stuff out properly this morning before you left. I didn’t want you to leave when it was weird between us.”

I sighed. “It’s been weird between us all summer.”

More silence. That was the first time either of us had actually admitted that out loud. For some reason it felt easier to say knowing she was two hundred miles away.

She still wasn’t speaking, so I kept going; the booze and the pocket buzzing and the two hundred miles making me spill stuff that had been locked up firmly in my head until now. “And, I mean, the thing is, it’s not gonna get any less weird now that I’m here, is it?”

“What do you mean?” she said quietly.

“I mean, I’m here and you’re there. We won’t see each other that much.”

“Yeah, but you said, at Reece’s party, remember, you said we could make it work?”

I heard her inhale sharply, but I carried on. “Like, I’m supposed to be working at other stuff, too, y’know? Meeting people. Making friends. But instead I’m standing out here talking to you. Do you really want me to spend the whole three years on the phone with you?”

“You’re being a dick, Luke,” she muttered.

I was, a little. But I was also right.

“Look, I’m sorry. It’s stupid to talk now,” I sighed. “I’m a little drunk. I’m wearing a bathrobe. I’ll call you tomorrow.” I wasn’t quite sure why I’d added the bathrobe information.

“If you’ve got something to say, then just say it. Have you met someone else?”

This actually made me laugh out loud. “Of course I haven’t fucking met someone else, Abbey! I’m out here talking to you! How can I meet someone else?”

“Do you want to meet someone else, though?”

“I want to go back inside.”

I hung up before she could respond. But my pocket was buzzing again as soon as I stepped back in.