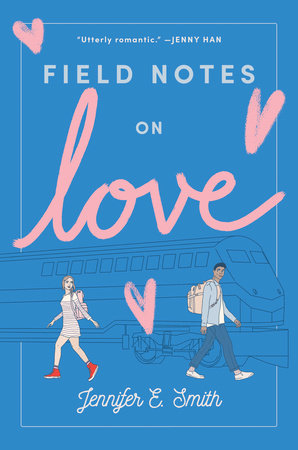 By Jennifer E. Smith On Tour
"Utterly romantic." --Jenny Han, NYT bestselling author of To All the Boys I've Loved Before

Two teens are thrown together on a cross-country train trip that will teach them about love, each other, and the futures they can build for themselves in this meet-cute romance from the bestselling author of Windfall and The Statistical Probability of Love at First Sight.

It's the perfect idea for a romantic week together: traveling across America by train.

But then Hugo's girlfriend dumps him. Her parting gift: the tickets for their long-planned last-hurrah-before-college trip. Only, it's been booked under her name. Nontransferable, no exceptions.

Mae is still reeling from being rejected from USC's film school. When she stumbles across Hugo's ad for a replacement Margaret Campbell (her full name!), she's certain it's exactly the adventure she needs to shake off her disappointment and jump-start her next film.

A cross-country train trip with a complete stranger might not seem like the best idea. But to Mae and Hugo, both eager to escape their regular lives, it makes perfect sense. What starts as a convenient arrangement soon turns into something more. But when life outside the train catches up to them, can they find a way to keep their feelings for each other from getting derailed?

"One of the loveliest, most touching romances of 2019 thus far that gets at the nature of something deeply uried in all of our hearts." --Entertainment Weekly
Read more
Read less
Read Excerpt
+ Add to My Bookshelf
+ Add to Goodreads

The shock of it takes a few minutes to absorb. During that time, Hugo sits with his head bent, his fingers laced behind his neck, trying to process the fact that Margaret Campbell—­his girlfriend of nearly three years—­is breaking up with him.

Hugo winces at this. But Margaret seems determined to forge ahead.

“The thing is,” she says, and he lifts his head, interested to find out what—­precisely—­it is, this thing that’s apparently happening. She gazes back at him with something like sympathy. “You can’t stay with someone only out of inertia, right?”

It’s clear the correct answer here is “Right.” But Hugo can’t bring himself to say it. He just continues to stare at her, wishing his brain weren’t quite so muddled.

“I know you must feel the same way,” she continues. “Things have been off between us for ages now. It’s obvious that it’s not working—­”

“Is it?” Hugo asks, and Margaret gives him a weary look. But he’s not trying to be cheeky. It’s just that none of this seems particularly obvious to him, and his face prickles with warmth as he wonders how he managed to get it all so wrong.

“Hugo. Come on. It’s been hard enough when we’re right across the road from each other. We must be barking mad to think we can do this when I’m all the way in California and you’re—­”

She stops abruptly, and they both blink at each other.

Margaret sighs. “See, that’s just it. Maybe if you’d stop acting like getting a scholarship to a perfectly good uni is the worst thing that’s ever happened to anyone in the history of—­”

“Hugo,” she says, interrupting him. “You’ve been in terrible form all summer. I’m not the only one who’s noticed. I realize this isn’t what you wanted, but at some point you just have to . . . well, get on with it, I suppose.”

He scratches at his knee, unable to look at her. She’s right, and they both know it, but the fact of this makes him want to crawl under the bed to avoid the rest of the conversation.

“Listen, I get it,” she says, playing with the end of her blond ponytail. “If things were different, this wouldn’t have been your first choice.”

This is only half-­true. Hugo certainly wouldn’t have minded trying for Oxford or Cambridge or St. Andrews, all of which would’ve been options had his A levels been the only consideration. But the University of Surrey is highly regarded too. It’s more that he never had a choice in the matter, that his path was set out for him long ago, and something about that has always made him feel like an animal at the zoo, penned in and pacing and a bit claustrophobic.

“But if things were different,” Margaret continues, “you wouldn’t have been offered the scholarship at all.”

She says this as if it were nothing, an incidental detail, and not the very thing Hugo has been torturing himself over for years now. Because he didn’t get a scholarship to the University of Surrey for being a brilliant essayist (which he is) or a maths genius (which he’s not). He didn’t get it for his skills as a pianist (though he’s decent) or his ability on the football pitch (he’s completely rubbish). It’s not the result of any particular skill or talent or accomplishment.

No, Hugo got the scholarship—­as did his five siblings—­simply for being born.

The minute they arrived in the world—­one after another, Hugo bringing up the rear—­they were showered with gifts. The local market gave them a year’s supply of formula. The pharmacy sent a truckload of free nappies. The mayor came to visit with keys to the city: six of them, one for each of England’s fifth-­ever set of sextuplets, affectionately dubbed “the Surrey Six.” And a wealthy donor presented their exhausted and deeply overwhelmed parents with scholarships to the local university for each of their half-­dozen newborns.

The man—­an eccentric billionaire who made his fortune through a chain of upscale coffee shops—­had gotten his start at the University of Surrey, and was elated at the thought of the publicity that would one day be generated by having the sextuplets there. When he died a few years ago, he left the scholarship in the hands of the university council, and they’ve been equally enthusiastic, making all sorts of plans for their arrival.

It’s only Hugo who isn’t thrilled. He knows he’s a complete monster for being anything less than grateful. It’s just that he hates the thought of accepting something so big simply because of the unlikely circumstances of his birth. Especially when his whole life has been about that.

“Look, I don’t want you to get the wrong idea,” Margaret is saying. “About us. About why we’re—­”

“Not an us anymore?”

She flinches. “I know I’ve been hard on you, but I don’t want you to think this is happening just because you’ve been moping all summer. Or because of the distance. It’s more that—­well, I suppose it feels like it’s time, doesn’t it?”

Hugo scrubs at his eyes, still trying to absorb all this, and when he looks up again, Margaret’s face has softened. She moves over to sit beside him on the bed, and he automatically leans into her, their shoulders pressed together. They’re both quiet for a moment, and he tries to focus his thoughts, which are zipping around in his head. Somewhere inside him, buried so deep he’s never thought to examine it, is the knowledge that she’s right about them, and his heart sinks because he’s somehow the last to know everything, even his own feelings.