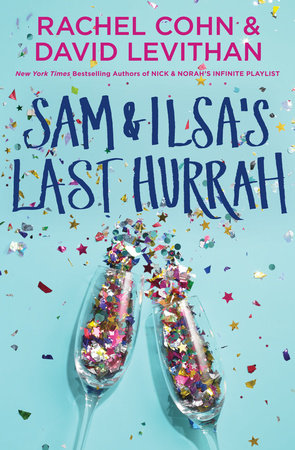 By Rachel Cohn and David Levithan On Tour
The New York Times Bestselling duo behind Nick & Norah's Infinite Playlist and The Twelve Days of Dash & Lily return with twins out to throw the party of a lifetime--or at least the best party of high school!

Siblings Sam and Ilsa Kehlmann have spent most of their high school years throwing parties for their friends--and now they've prepared their final blowout, just before graduation.

The rules are simple: each twin gets to invite three guests, and the other twin doesn't know who's coming until the partiers show up at the door. With Sam and Ilsa, the sibling revelry is always tempered with a large dose of sibling rivalry, and tonight is no exception.

One night. One apartment. Eight people. What could possibly go wrong? Oh, we all know the answer is plenty. But plenty also goes right, as well...in rather surprising ways.
Read more
Read less
Read Excerpt
+ Add to My Bookshelf
+ Add to Goodreads

By David Levithan
One

My brother is way too obsessed with our grandma’s sex life.

“I think Czarina has taken a lover,” Sam says, holding out his hand to me. “Spatula. Stat.” My job is to maximize the chef’s surgical efficiency by passing him the gadgets he requests. I hand him the spatula. “That’s an egg-­turner spatula. The spoon spatula, Ilsa,” he says, like it’s so obvious. “Observe!”

I look at his bowl, filled with cheese and spinach. Seems like any old spatula could work in that bowl, but if it were up to me, we’d order takeout from Zabar’s and not bother with DIY cooking at all. Sam’s an amazing cook. But all that work! No, thank you. He gets me for a half hour as sous-­chef, and the rest of the meal is on him. My job is planning fabulousness, not catering it. I should have been the gay man, not my twin brother.

I hand Sam the spoon spatula. “What makes you think Czarina has taken a lover?”

“There’s something different about these trips. I feel it. Did you notice how . . . nice she seems when she gets back? It’s upsetting.”

“What are you really upset about? That she’s been nice, or that she took Mom and Dad and not you to Paris with her for the weekend?” I love when Czarina goes away and lets us use her apartment. Then I get to be the queen of her castle, and not have to share Sam with her.

“Don’t ask me to be anything other than who I am.”

Sam laughs, then raises an eyebrow at me. “Aren’t you just a little concerned? Czarina even said we didn’t have to leave her bedroom door locked. Of all the dinner parties she’s let us host in her apartment, her one and only strict rule has been”—­and here Sam mimics Czarina’s gangster-­worthy growl—­“ ‘no teenage miscreants shall miscreant in my bedroom.’ ”

“Yeah, that’s why she always shows up during dessert, despite saying she was taking a night out to go to the symphony, and even when she’s locked away all the liquor. The control freak can’t take our word for it that we won’t let anyone in her bedroom or break into her booze.” I reconsider what I just said, and then amend my statement. “I mean, take my word for it. She knows Sam the Saint won’t break her rules.”

“You texted Czarina and got her permission to go into her closet. That’s not rule breaking.”

What constitutes legit rule breaking? Perhaps that party two years ago when Parker and I jimmied our way into Czarina’s brandy collection and then ended the party making out on her bed, with the bedroom door locked so no one else could get in. Best aperitif ever. Miscreants, and proud! Czarina was in Milan, so I knew for a fact she wouldn’t be barging in. My parents say I’m too reckless, but even I know not to expose myself to Czarina’s in-­your-­face wrath. I know exactly how that brutal wrath works, because it’s the primary trait of hers I inherited. That, and we both look good wearing almost any shape of hat.

I aspire to be more like Czarina in ways other than being wrathful. I’d like to be a heartbreaker, rather than the one left heartbroken. The boss of any situation. Like Czarina, I want to travel the world and have wild affairs, but with the security of a grand Manhattan apartment as home base. (Insert the sounds of my parents’ cynical laughter here.) Unlike Czarina, I don’t aspire to wear bright-­colored caftans and chunky jewelry as my signature look. Aside from dinner parties, I’ll be content with the more humdrum look of skinny jeans and extremely cute tight shirts.

Sam counters my sigh with his own. It might be our only twin thing: supportive sighing. “I can’t believe this is our last party here. I can’t believe she’s finally leaving this place.”

Where Sam and I live with our parents—­a few blocks away, in a bland Manhattan apartment that’s, typically, too small, with an office alcove converted to a third bedroom that Sam uses—­is the real humdrum. Czarina’s abode? Spectacular. Our grandmother lives in a gorgeous apartment in a historic building called the Stanwyck, on the Upper West Side of Manhattan. It’s a huge two-­bedroom apartment with a dining room and a study big enough for Sam’s piano, and views of the city skyline and the Hudson River. (Anyone who feels bad about Sam getting the crap office alcove for a bedroom at our parents’ apartment should know that Czarina’s spare bedroom is basically a shrine to Sam—­decorated with his music awards, photos of Sam at every recital since he learned to play piano, and the most comfortable bed in the world, picked out by Sam. The duvet on the bed—­also chosen by Sam—­might as well be embossed with needlepoint hand-­stitched by Czarina, announcing: sam! sam is my favorite!)

Czarina has experienced a good but not lucrative career, so no way has she had the income to support this type of Manhattan real estate. By New York City real estate standards, she’s a pauper, but she’s lived like a queen, all because when Czarina was a young, broke fashionista, she moved in with her grandparents, into their rent-­controlled apartment. And she never left. Hers was the only apartment in the one-­hundred-­unit building that didn’t convert to condo. (Thank Czarina’s bulldog lawyer.) Her building is now basically 99 percent rich people, and Czarina. She’s the 1 percent at the Stanwyck.

Or, she was. After twenty years of buyout offers, Czarina finally agreed to leave her palace. All it took was an extra zero at the end of the financial settlement—­before the decimal point. She basically just won the lottery. She’s been married five times, and we thought she’d won big when she divorced the Brazilian taxidermist. That settlement was nothing in comparison; she used most of the windfall from that sicko, preserved-­moose-­head man’s money to splurge on a baby grand piano for her Virtuoso Sam, and on a fancy oven for her Chef Sam, so her precious grandson could wow her guests with his amazing meals and music ability. Tonight, I get those all to myself.

I should be mad that Czarina chose my brother over me as her favorite, but even I will acknowledge that Sam is a better person than me. He’s everything I’m not. Patient, kind, sweet, talented. I would choose him if I was Czarina, too. To be honest, it’s a relief that Sam’s the star in the family. Being the fuck­up bitch is the role I know. I fit into it like anyone’s favorite pair of jeans.