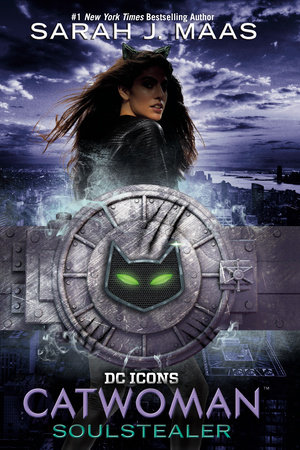 When the Bat's away, the Cat will play. It's time to see how many lives this cat really has.

Two years after escaping Gotham City's slums, Selina Kyle returns as the mysterious and wealthy Holly Vanderhees. She quickly discovers that with Batman off on a vital mission, the city looks ripe for the taking.

Meanwhile, Luke Fox wants to prove that as Batwing he has what it takes to help people. He targets a new thief on the prowl who has teamed up with Poison Ivy and Harley Quinn. Together, they are wreaking havoc. This Catwoman is clever—she may be Batwing's undoing.

In this third DC Icons book, Selina is playing a desperate game of cat and mouse, forming unexpected friendships and entangling herself with Batwing by night and her devilishly handsome neighbor Luke Fox by day. But with a dangerous threat from the past on her tail, will she be able to pull off the heist that's closest to her heart?

"Maas has a gift for crafting fierce female protagonists. . . . An epic shoutout to all the bad girls who know how to have fun."
—Kirkus Reviews, STARRED REVIEW

"A Catwoman story unlike anything you've seen before." --Nerdist

Could You Be Catwoman?

The roaring crowd in the makeshift arena didn’t set her blood on fire.

It did not shake her, or rile her, or set her hopping from foot to foot. No, Selina Kyle only rolled her shoulders--once, twice.

The wild cheering that barreled down the grimy hallway to the prep room was little more than a distant rumble of thunder. A storm, just like the one that had swept over the East End on her walk from the apartment complex. She’d been soaked before she reached the covert subway entrance that led into the underground gaming warren owned by Carmine Falcone, the latest of Gotham City’s endless parade of mob bosses.

But like any other storm, this fight, too, would be weathered.

Rain still drying in her long, dark hair, Selina checked that it was indeed tucked into its tight bun atop her head. She’d made the mistake once of wearing a ponytail--in her second street fight. The other girl had managed to grab it, and those few seconds when Selina’s neck had been exposed had lasted longer than any in her life.

But she’d won--barely. And she’d learned. Had learned at every fight since, whether on the streets above or in the arena carved into the sewers beneath Gotham City.

It didn’t matter who her opponent was tonight. The challengers were all usually variations of the same: desperate men who owed more than they could repay to Falcone. Fools willing to risk their lives for a chance to lift their debt by taking on one of his Leopards in the ring.

The prize: never having to look over their shoulder for a waiting shadow. The cost of failing: having their asses handed to them--and the debts remained. Usually with the promise of a one-way ticket to the bottom of the Sprang River. The odds of winning: slim to none.

Regardless of whatever sad sack she’d be battling tonight, Selina prayed Falcone would give her the nod faster than last time. That fight . . . He’d made her keep that particularly brutal match going. The crowd had been too excited, too ready to spend money on the cheap alcohol and everything else for sale in the subterranean warren. She’d taken home more bruises than usual, and the man she’d beaten to unconsciousness . . .

Not her problem, she told herself again and again. Even when she saw her adversaries’ bloodied faces in her dreams, both asleep and waking. What Falcone did with them after the fight was not her problem. She left her opponents breathing. At least she had that.

And at least she wasn’t dumb enough to push back outright, like some of the other Leopards. The ones who were too proud or too stupid or too young to get how the game was played. No, her small rebellions against Carmine Falcone were subtler. He wanted men dead--she left them unconscious, but did it so well that not one person in the crowd objected.

A fine line to walk, especially with her sister’s life hanging in the balance. Push back too much, and Falcone might ask questions, start wondering who meant the most to her. Where to strike hardest. She’d never allow it to get to that point. Never risk Maggie’s safety like that--even if these fights were all for her. Every one of them.

It had been three years since Selina had joined the Leopards, and nearly two and a half since she’d proved herself against the other girl gangs well enough that Mika, her Alpha, had introduced her to Falcone. Selina hadn’t dared miss that meeting.

Order in the girl gangs was simple: The Alpha of each gang ruled and protected, laid down punishment and reward. The Alphas’ commands were law. And the enforcers of those commands were their Seconds and Thirds. From there, the pecking order turned murkier. Fighting offered a way to rise in the ranks--or you could fall, depending on how badly a match went. Even an Alpha might be challenged if you were dumb or brave enough to do so.

But the thought of ascending the ranks had been far from Selina’s mind when Mika had brought Falcone over to watch her take on the Second of the Wolf Pack and leave the girl leaking blood onto the concrete of the alley.

Before that fight, only four leopard spots had been inked onto Selina’s pale left arm, each a trophy of a fight won.

Selina adjusted the hem of her white tank. At seventeen, she now had twenty-seven spots inked across both arms.

That’s what the match emcee was declaring down the hall. Selina could just make out the croon of words: The undefeated champion, the fiercest of Leopards . . .

Her hand drifted to the one item she was allowed to bring into the arena: the bullwhip.

Some Leopards opted for signature makeup or clothes to make their identities stand out in the ring. Selina had little money to spare for that kind of thing--not when a tube of lip gloss could cost as much as a small meal. But Mika had been unimpressed when Selina had shown up to her first official fight in her old gymnastics leotard and a pair of leggings.

You look like you’re going to Jazzercise, her Alpha had said. Let’s give you some claws at least.

All sorts of small weapons were allowed in the ring, short of knives and guns. But there hadn’t been any on hand that night. No, there had only been the bullwhip, discarded in a pile of props from when this place had hosted some sort of alternative circus.

You’ve got ten minutes to figure out how to use it, Mika had warned Selina before leaving her to it.

She’d barely figured out how to snap the thing before she was shoved into the fighting ring. The whip had been more of a hindrance than a help in that first fight, but the crowd had loved it. And some small part of her had loved it, the crack that cleaved through the world.

So she’d learned to wield it. Until it became an extension of her arm, until it gave her an edge that her slight frame didn’t offer. The high drama it provided in the ring didn’t hurt, either.

A thump on the metal door was her signal to go.

Selina checked the bullwhip at her hip, her black spandex pants, the green sneakers that matched her eyes--though no one had ever commented on it. She flexed her fingers within their wrappings. All good.

Or as good as could be.