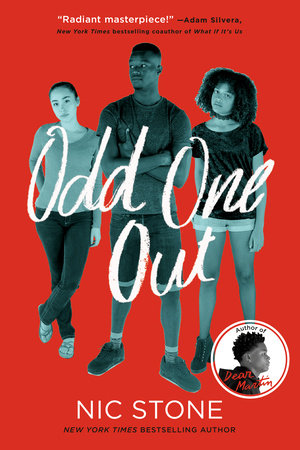 By Nic Stone On Tour
From the #1 New York Times bestselling author of Dear Martin comes an honest and touching depiction of friendship, first love, and everything in between. Perfect for fans of Love, Simon and What If It's Us.

Courtney Cooper and Jupiter Sanchez (Coop & Jupe!) have been next-door neighbors and best friends since they were seven-years-old. She's his partner-in-crime and other half. But lately, Cooper can't ignore he might want something more than friendship from Jupiter.

When Rae Chin moves to town she can't believe how lucky she is to find Coop and Jupe. Being the new kid is usually synonymous with pariah, but around these two, she finally feels like she belongs. She's so grateful she wants to kiss him...and her.

Jupiter has always liked girls. But when Rae starts dating Cooper, Jupe realizes that the only girl she ever really imagined by his side was her.

"Fans of Nic and new readers will find themselves engrossed." -Teen Vogue

"Declaring yourself--how you would like to be represented and whom you want to love and connect with--is treated with real tenderness." -The New York Times
Read more
Read less
Read Excerpt
+ Add to My Bookshelf
+ Add to Goodreads

By Nic Stone
I, Courtney Aloysius Cooper IV, Should Be a Very Sad Dude

I should be devastated or pissed or deflated as I let myself into the house next door and climb the stairs to my best friend’s bedroom. I should be crushed that less than a month into my junior year of high school, my latest girlfriend kicked me to the curb like a pair of too-­small shoes.

It’s ridiculous that I have to stop outside the door to get my act together so Best Friend won’t get suspicious, isn’t it? Rubbing my eyes so the whites look a little red, slumping my shoulders, hanging my head, and poking my bottom lip out just the slightest bit so I look sad . . .

Best Friend doesn’t even look up from her phone when I open the door. Normally I’d be offended since I did all this work pretending sadness, but right now it’s a good thing she keeps her eyes fixed to the little screen. She’s sitting at her desk, laptop open, in one of those thin-­strapped tank tops—­nothing underneath, mind you, and she’s got a good bit more going on up there than most girls our age. She’s also wearing really small shorts, and she’s not small down bottom, either. In the words of her papi: “All chichis and culo, that girl . . .”

And I can’t not notice. Been trying to ignore her *assets* since they started blooming, if you will, in seventh grade. Largely because I know she would kick me to the curb if she knew I thought of her . . . that way. But anyway, when I see her sitting there with her light brown skin on display like sun-­kissed sand and her hair plopped on top of her head in a messy-­bun thing, my devastated-­dumped-­dude act drops like a bad habit.

I close my eyes. The image has already seared itself into my memory, but I need to pull myself back together. With my eyes still closed, I cross the room I know better than my own and drop down into the old La-­Z-­Boy that belonged to my dad.

Despite the squeak of the springs in this chair, she doesn’t say a word.

I crack one eye: no earbuds. There’s no way she doesn’t realize I’m in here. . . . She smiles at something on her phone, tap-­tap-­tap-­tap-­taps around, and after literally two seconds, there’s the ping of an incoming text. She L’s-­O-­L.

“You should put some clothes on, Jupe.”

“Pffft. Last I checked, you’re in my domain, peon.”

Who the hell is she even talking to?

I take a deep breath. Wrangle a leash onto the green-­eyed monster bastard raging within. “I can’t.”

She glares over her shoulder at me. “Don’t be difficult.” God.

Even the stank-­face is a sight to behold. “You’re the one being difficult,” I say.

“Oh, well, excuse me for feeling any opposition to you waltzing into my room without knocking and suggesting that I adapt to your uninvited presence.” She sets her phone down—­thank God—­faces her computer, and mutters, “Friggin’ patriarchy, I swear.”

I smile and glance around the room: the unmade bed and piles of clothes—­dirty stuff on the floor near the closet, clean in a basket at the foot of the bed; the old TV and VHS player she keeps for my sake since she never uses them when I’m not here, or so she says; the photo on the dresser of me, her, my mom, and her dads on vacation in Jamaica six years ago; the small tower of community service and public speaking certificates and plaques stacked in the corner that she “just hasn’t gotten around” to hanging on the white walls.

I’ll never forget my first time being in here ten years ago: she was six, and I was seven, and a week after Mama and I moved in next door, Jupe dragged me into this “domain” of hers because she wanted “to know more about my sadness.” She knew we’d moved because my dad died—­I told her that the day we met. But this was the day I hit her with the details: he was killed in a car crash and he’d been out of town and I hadn’t gotten to say goodbye.

Still hate talking about this.

I cried and cried on her bed, and Jupe wrapped her skinny arms around me and told me everything would be okay. She said she knew all about death because her bunny Migsy “got uterined cancers and the vet couldn’t save her.” And she told me that after a while it wouldn’t “hurt so bad,” but “I’ll be your friend when it hurts the most, Courtney.”

And there she is: Jupiter Charity-­Sanchez at her computer, with her grass-­green fingernails, three studs in each ear, and a hoop through her right nostril, likely organizing some community event to bring “sustenance and smiles” to the local homeless or a boycott of some major retailer in protest of sweatshop conditions in Sri Lanka.

This is home. She is home.

“Did you pull together a donation for the Carl’s Closet clothing drive like I asked you to, loser?” she says.

She shakes her head. “So unreliab—­”

She snorts when she reads this time.

“Who are you texting?” I ask as she taps out her response.

“What’s with the third degree, Coop?” She turns back to her computer.

I grab a pair of balled socks from the clean-­clothes basket and lob it at her head.