By Nic Stone On Tour
"Powerful, wrenching.” –JOHN GREEN, #1 New York Times bestselling author of Turtles All the Way Down

"A must-read!” –ANGIE THOMAS, #1 New York Times bestselling author of The Hate U Give

Justyce McAllister is a good kid, an honor student, and always there to help a friend—but none of that matters to the police officer who just put him in handcuffs. Despite leaving his rough neighborhood behind, he can't escape the scorn of his former peers or the ridicule of his new classmates.

Justyce looks to the teachings of Dr. Martin Luther King Jr. for answers. But do they hold up anymore? He starts a journal to Dr. King to find out.

Then comes the day Justyce goes driving with his best friend, Manny, windows rolled down, music turned up—way up, sparking the fury of a white off-duty cop beside them. Words fly. Shots are fired. Justyce and Manny are caught in the crosshairs. In the media fallout, it's Justyce who is under attack. 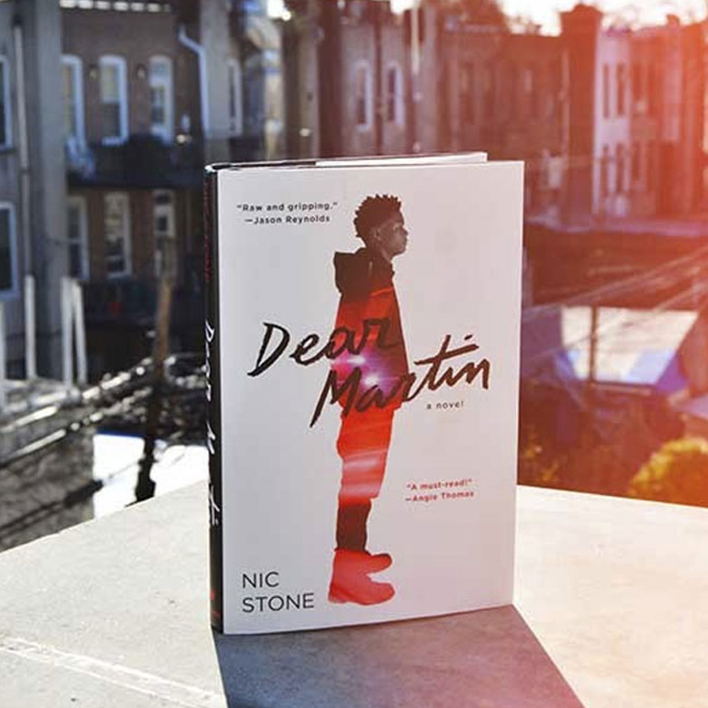 From where he’s standing across the street, Justyce can see her: Melo Taylor, ex-­girlfriend, slumped over beside her Benz on the damp concrete of the FarmFresh parking lot. She’s missing a shoe, and the contents of her purse are scattered around her like the guts of a pulled party popper. He knows she’s stone drunk, but this is too much, even for her.

Jus shakes his head, remembering the judgment all over his best friend Manny’s face as he left Manny’s house not fifteen minutes ago.

As he approaches, she opens her eyes, and he waves and pulls his earbuds out just in time to hear her say, “What the hell are you doing here?”

Justyce asks himself the same question as he watches her try—­and fail—­to shift to her knees. She falls over sideways and hits her face against the car door.

He drops down and reaches for her cheek—­which is as red as the candy-­apple paint job. “Damn, Melo, are you okay?”

She pushes his hand away. “What do you care?”

Stung, Justyce takes a deep breath. He cares a lot. Obviously. If he didn’t, he wouldn’t’ve walked a mile from Manny’s house at three in the morning (Manny’s of the opinion that Melo’s “the worst thing that ever happened” to Jus, so of course he refused to give his boy a ride). All to keep his drunken disaster of an ex from driving.

He should walk away right now, Justyce should.

“Jessa called me,” he tells her.

“Don’t be like that, babe. She only called me because she cares about you.”

Jessa had planned to take Melo home herself, but Mel threatened to call the cops and say she’d been kidnapped if Jessa didn’t drop her at her car.

Melo can be a little dramatic when she’s drunk.

“I’m totally unfollowing her,” she says (case in point). “In life and online. Nosy bitch.”

Justyce shakes his head again. “I just came to make sure you get home okay.” That’s when it hits Justyce that while he might succeed in getting Melo home, he has no idea how he’ll get back. He closes his eyes as Manny’s words ring through his head: This Captain Save-­A-­Ho thing is gonna get you in trouble, dawg.

He looks Melo over. She’s now sitting with her head leaned back against the car door, half-­asleep, mouth open.

She starts to tilt, and Justyce catches her by the shoulders to keep her from falling. She startles, looking at him wide-­eyed, and Jus can see everything about her that initially caught his attention. Melo’s dad is this Hall of Fame NFL linebacker (biiiiig black dude), but her mom is from Norway. She got Mrs. Taylor’s milky Norwegian complexion, wavy hair the color of honey, and amazing green eyes that are kind of purple around the edge, but she has really full lips, a small waist, crazy curvy hips, and probably the nicest butt Jus has ever seen in his life.

That’s part of his problem: he gets too tripped up by how beautiful she is. He never would’ve dreamed a girl as fine as her would be into him.

Now he’s got the urge to kiss her even though her eyes are red and her hair’s a mess and she smells like vodka and cigarettes and weed. But when he goes to push her hair out of her face, she shoves his hand away again. “Don’t touch me, Justyce.”

She starts shifting her stuff around on the ground—­lipstick, Kleenex, tampons, one of those circular thingies with the makeup in one half and a mirror in the other, a flask. “Ugh, where are my keeeeeeeys?”

Justyce spots them in front of the back tire and snatches them up. “You’re not driving, Melo.”

“Give ’em.” She swipes for the keys but falls into his arms instead. Justyce props her against the car again and gathers the rest of her stuff to put it back in her bag—­which is large enough to hold a week’s worth of groceries (what is it with girls and purses the size of duffel bags?). He unlocks the car, tosses the bag on the floor of the backseat, and tries to get Melo up off the ground.

First, she throws up all over the hoodie Jus is wearing.

Which belongs to Manny. Who specifically said, “Don’t come back here with throw-­up on my hoodie.”

Jus takes off the sweatshirt and tosses it in the backseat.

When he tries to pick Melo up again, she slaps him. Hard. “Leave me alone, Justyce,” she says.

“I can’t do that, Mel. There’s no way you’ll make it home if you try to drive yourself.”

He tries to lift her by the armpits and she spits in his face.

He considers walking away again. He could call her parents, stick her keys in his pocket, and bounce. Oak Ridge is probably the safest neighborhood in Atlanta. She’d be fine for the twenty-­five minutes it would take Mr. Taylor to get here.

But he can’t. Despite Manny’s assertion that Melo needs to “suffer some consequences for once,” leaving her here all vulnerable doesn’t seem like the right thing to do. So he picks her up and tosses her over his shoulder.

Melo responds in her usual delicate fashion: she screams and beats him on the back with her fists.

Justyce struggles to get the back door open and is lowering her into the car when he hears the WHOOOOP of a short siren and sees the blue lights. In the few seconds it takes the police car to screech to a stop behind him, Justyce settles Melo into the backseat.

Justyce can hear the approaching footsteps, but he stays focused on getting Melo strapped in. He wants it to be clear to the cop that she wasn’t gonna drive so she won’t be in even worse trouble.

Before he can get his head out of the car, he feels a tug on his shirt and is yanked backward. His head smacks the doorframe just before a hand clamps down on the back of his neck. His upper body slams onto the trunk with so much force, he bites the inside of his cheek, and his mouth fills with blood.

Jus swallows, head spinning, unable to get his bearings. The sting of cold metal around his wrists pulls him back to reality.

It hits him: Melo’s drunk beyond belief in the backseat of a car she fully intended to drive, yet Jus is the one in handcuffs.

The cop shoves him to the ground beside the police cruiser as he asks if Justyce understands his rights. Justyce doesn’t remember hearing any rights, but his ears had been ringing from the two blows to the head, so maybe he missed them. He swallows more blood.

“Officer, this is a big misundersta—­” he starts to say, but he doesn’t get to finish because the officer hits him in the face.

“Don’t you say shit to me, you son of a bitch. I knew your punk ass was up to no good when I saw you walking down the road with that goddamn hood on.”

So the hood was a bad idea. Earbuds too. Probably would’ve noticed he was being trailed without them. “But, Officer, I—­”

“You keep your mouth shut.” The cop squats and gets right in Justyce’s face. “I know your kind: punks like you wander the streets of nice neighborhoods searching for prey. Just couldn’t resist the pretty white girl who’d locked her keys in her car, could ya?”

Except that doesn’t even make sense. If Mel had locked the keys in the car, Jus wouldn’t have been able to get her inside it, would he? Justyce finds the officer’s nameplate; castillo, it reads, though the guy looks like a regular white dude. Mama told him how to handle this type of situation, though he must admit he never expected to actually need the advice: Be respectful; keep the anger in check; make sure the police can see your hands (though that’s impossible right now). “Officer Castillo, I mean you no disresp—­”

“I told your punk ass to shut the fuck up!”

He wishes he could see Melo. Get her to tell this cop the truth. But the dude is blocking his view.

“Now, if you know what’s good for you, you won’t move or speak. Resistance will only land you in deeper shit. Got it?”

Cigarette breath and flecks of spit hit Justyce’s face as the cop speaks, but Justyce fixes his gaze on the glowing green F of the FarmFresh sign.

“Look at me when I’m talking to you, boy.” He grabs Justyce’s chin. “I asked you a question.”