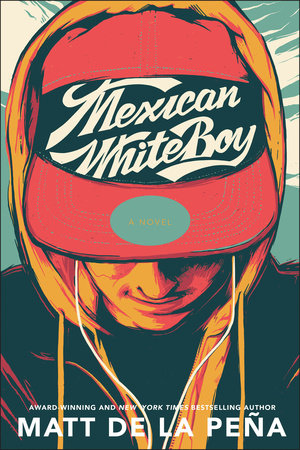 By Matt de la Peña
Newbery Award-winning and New York Times bestselling author Matt de la Peña's Mexican WhiteBoy is a story of friendship, acceptance, and the struggle to find your identity in a world of definitions.

Danny is tall and skinny. Even though he’s not built, his arms are long enough to give his pitch a power so fierce any college scout would sign him on the spot. Ninety-five mile an hour fastball, but the boy’s not even on a team. Every time he gets up on the mound, he loses it.

But at his private school, they don’t expect much else from him. Danny is brown. Half-Mexican brown. And growing up in San Diego that close to the border means everyone else knows exactly who he is before he even opens his mouth. Before they find out he can’t speak Spanish, and before they realize his mom has blond hair and blue eyes, they’ve got him pegged. But it works the other way too. And Danny’s convinced it’s his whiteness that sent his father back to Mexico.

That’s why he’s spending the summer with his dad’s family. But to find himself, he may just have to face the demons he refuses to see--the demons that are right in front of his face. And open up to a friendship he never saw coming.

Matt de la Peña's critically acclaimed novel is an intimate and moving story that offers hope to those who least expect it.

"[A] first-rate exploration of self-identity." --SLJ

"Unique in its gritty realism and honest portrayal of the complexities of life for inner-city teens...de la Peña poignantly conveys the message that, despite obstacles, you must believe in yourself and shape your own future." --The Horn Book Magazine

"The baseball scenes...sizzle like Danny's fastball. Danny's struggle to find his place will speak strongly to all teens, but especially to those of mixed race." --Booklist

"Mexican WhiteBoy...shows that no matter what obstacles you face, you can still reach your dreams with a positive attitude. This is more than a book about a baseball player--this is a book about life." --Curtis Granderson, New York Mets outfielder

By Matt de la Peña
Dressed in a well-worn Billabong tee, camo cargo shorts and a pair of old-school slip-on Vans, Danny Lopez follows his favorite cousin, Sofia, as she rolls up on the cul-de-sac crowd with OG swagger.

Sofia waves back, pulls Danny by the arm toward a group of girls sitting on a blanket in an uneven semicircle. "Oye putas," she says. "Yo, this my cousin Danny I was telling you about. He's gonna be staying with me for the summer." She smiles big--proud, Danny thinks. "Yo, cuz, these are my girls." She points them out and rattles off names: "Carmen, Raquel, Angela, Bee, Juanita, Flaca and Guita."

"Hey," the girls singsong in unison.

Danny nods with a shy smile, aims his eyes at the asphalt. He feels the heat of their stares and for a second he wishes he could morph into one of the ants zigzagging in and out of tiny crevices in the street. Their little lives, he thinks, totally off the radar.

Danny's sixteen, a shade over six foot and only a year younger than Sofia, but unless he's on a pitching mound he feels like a boy. He's long and thin with skinny arms hanging down skinny thighs--his arm length the reason he can fire a fastball so hard. His shoulders are wide, but his muscles have yet to catch up. Sometimes when he sees himself in a mirror it looks like his shirt is propped up by an upside-down coat hanger. Not a human body. Doesn't even look real.

And Danny's brown. Half-Mexican brown. A shade darker than all the white kids at his private high school, Leucadia Prep. Up there, Mexican people do under-the-table yard work and hide out in the hills because they're in San Diego illegally. Only other people on Leucadia's campus who share his shade are the lunch-line ladies, the gardeners, the custodians. But whenever Danny comes down here, to National City--where his dad grew up, where all his aunts and uncles and cousins still live--he feels pale. A full shade lighter. Albino almost.

"And just so you know," Sofia adds, "Danny ain't no big talker, all right? He's mad smart, gets nothin' but A's at the best private school in San Diego, but don't get your chones in a bunch if you can't never pull him into a convo." Sofia looks prettier than Danny remembers. Less of a tomboy. Her hair long now, makeup around her eyes.
Carmen clears her throat, says: "He don't need to talk to give me no deep-tissue massage." She gives Danny an exaggerated wink.

"Ain't need no words for us to soak in a nice Jacuzzi bath together," Flaca says. She reaches out, puts her hand on one of Danny's Vans. "We can just sit there, Papi. Backs against them jet thingies. Take turns sippin' a little white Zin and shit. How's that sound, beautiful?"

Danny gives her a polite smile, but inside he's shrinking. He's trying to suck back into his shell, like a poked and prodded snail.

Behind his back he grips his left wrist, digs his fingernails into the skin until a sharp pain floods his mind, makes him feel real.

Angela and Bee comb Danny over with their almond-shaped eyes, devour his out-of-place surfer style like a pack of rabid dogs. Danny cringes at how different he must seem to his cousin's friends. They're all dark chocolate-colored, hair sprayed up, dressed in pro jerseys and Dickies, Timberlands. Gold and silver chains. Calligraphy-style tats. Danny's skin is too clean, too light, his clothes too soft.