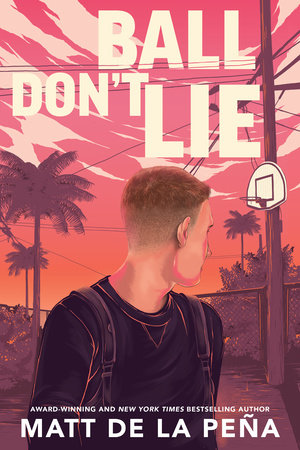 Sticky is a beat-around-the-head foster kid with nowhere to call home but the street, and an outer shell so tough that no one will take him in. He started out life so far behind the pack that the finish line seems nearly unreachable. He’s a white boy living and playing in a world where he doesn’t seem to belong.

But Sticky can ball. And basketball might just be his ticket out . . . if he can only realize that he doesn’t have to be the person everyone else expects him to be.

Matt de la Peña's breakout urban masterpiece, Ball Don’t Lie takes place where the street and the court meet and where a boy can be anything if he puts his mind to it.

★ "[An] inspiring story. Sticky is a true original, and de la Peña has skillfully brought him to life." --School Library Journal, Starred

"Riveting.... Teens will be strongly affected by the unforgettable...basketball action; and the questions about race, love, self-worth, and what it means to build a life without advantages." --Booklist

"I have never before seen blacktop ball depicted so well. In this novel, you will find its flash, its power, and its elegance without chains. This is powerful stuff." --Antawn Jamison, forward for the Los Angeles Clippers

"Truly authentic in its examination of both the game I love and the invariable missteps toward manhood. You cannot fail to be moved by the eloquence and truth of this story." --Rick Fox, former forward for the Los Angeles Lakers

An ALA Best Book for Young Adults


with his fierce fists and suspect jump shot, sets his stuff ($1.45 sandals, key to bike lock, extra T-shirt) on the bleachers and holds his hands out for the ball. It's ten in the morning and Lincoln Rec has just opened. Sticky's at the free-throw line working out his routine, while all the regulars come swaggering in. Come on, little man, Dreadlock Man says. Give up the rock.

Sticky throws an around-the-back, no-look dime. Watches Dreadlock Man rise into the air with his awful form--calves tightening, dreads scattering, eyes poised on the goal--and let go of a sorry-looking line drive. Before he comes back down to the dusty old hardwood, he yells out: Peanut Butter! Says it every time he takes a jumper. Peanut Butter! That's what he wants everyone to call him, but nobody does.
When the ball ricochets off the side of the backboard, entirely missing the rim, he says what any man would say: Hey, yo, Stick, let me get one more.

Hawk passes through the door, from sunny day into old dark gym. A big black man. Wears bright wraparound shades and baggy shorts, the new Jordans on his size-sixteen feet. Hawk has a little money to his name. He's one of the few Lincoln Rec ballers who does. Some of the regulars say he made a few movies a couple years back. A stunt double maybe or security on the set. If you look quickly, get a fast profile shot, you might think he looks like someone.

Hey, yo, Dreadlock Man, he says, megaphoning a hand around his mouth. I got five says you brick that shot. The whole side of his shaved head flexes as he chews hard at his gum.
Dreadlock Man takes a couple awkward dribbles and rises again. Peanut Butter! This time his ball arcs through the air without backspin. A Phil Niekro knuckleball that thuds off the back of the rim and drops into Sticky's waiting hands.

Damn, Dreadlock Man, your shot's straight broke. Hawk falls into the bleachers laughing, goes to lace up his new sneaks.


Other dudes come strutting into the gym. Slapping hands. Slinging their bags onto the bleachers and talking trash.

Sticky high-dribbles to the other end of the court, spins in an acrobatic reverse. He points up at an invisible crowd.


Dreadlock Man watches, hands on hips. Yells out: Come on, Stick, we tryin to shoot down here.
A couple other balls get tossed into the rotation. Everybody shooting short set-shots to get warm, stretching out stiff shoulders and legs. Most of these cats are just out of bed. A couple have pulled themselves off a piece of cardboard on court two, having spent the night where all the homeless stay.
Lincoln Rec functions both as a great place to hoop and a small-time homeless shelter.
Sometimes things overlap.

Sticky comes dribbling down from the other side of the court with his left hand. He goes right up to Dante, who's just walked in carrying a duffel bag, the best player in the gym, and shoots a soft twenty-footer over his outstretched hand. Dante and Sticky watch the ball smack both sides of the rim and bounce off toward the east sideline.

Go get that brick, Stick, Dante says. Bring it back my way so you could watch a real shooter.
Dante played ball overseas for six or seven seasons; he's slick with both the rock and his mouth. Some cats say, Watch it, man, to newcomers, dude will beat you two times. Then they sit back and clown those who brush off their warning:

Told ya, dawg. Didn't I tell him, Big J, when he walked his sorry ass in here?

Yeah, I heard it, OP. I was sitting right there when you said it.

Dante's skin shines black as night, and his hair is scarecrow wild. The devil's growth fingers out from his chin.

Sticky skips a bounce pass to Dante, who pats it around his back a little, through his legs some, close to the ground with his tips like a magician, and then fires up a twenty-five-footer that nestles in the gut of the net. You see how I play the strings, young Stick? He laughs a little and nods his head: Just like that, baby boy. That's string music.

Dante struts off the court with hip-hop rhythm, brushes past a businessman (who's stopped in to watch these black guys play: arms folded, subtle smile) and lies down near the bleachers to stretch his thirty-seven-year-old back.


This is Lincoln Rec on a Thursday, midsummer.

It's the best place in L.A. to ball. Some sports mag even did a cover story about it a few years back. Gym manager Jimmy's gold-tooth smile spread right across pages seventy-two and seventy-three. The article talked about how one court houses the homeless and the other accommodates the fearless. How Michael Cage sometimes shows up. Cliff Levingston. Eddie Johnson. Bill Walton was quoted saying: "It's the sweetest run in all of Southern California." The gym is in the middle of a pretty good-sized park, adjacent to some museums and business offices. The place gets so dark that when you've been in there a while and you go to peek your head outside to check your car, your eyes freeze up and hide like you've just stared in the sun.

Games go to eleven straight up. No win by two here. Fouls are called by the offense. The ball they use is dead weight. The leather has soaked up so much sweat from so many different dudes over the years, it takes a lot of legs just to get it up to the rim.


Other than that, there's a constant sour smell in the air, a no dunking sign that nobody pays attention to, and an unwritten rule that all who step foot through the gym doors with the intention of getting on the court better come with their A-game.