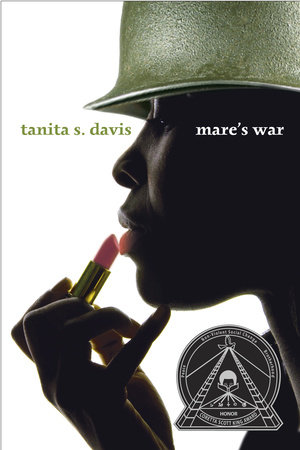 By Tanita S. Davis
Meet Mare, a World War II veteran and a grandmother like no other. She was once a willful teenager who escaped her less than perfect life in the deep South and lied about her age to join the African American Battalion of the Women's Army Corps. Now she is driving her granddaughters—two willful teenagers in their own rite—on a cross-country road trip. The girls are initially skeptical of Mare's flippy wigs and stilletos, but they soon find themselves entranced by the story she has to tell, and readers will be too.

It's just a sporty red car parked across our driveway, but when I see it, my stomach plummets. It's my grandmother.

Already, I hate this summer. Usually, I laze around with my best friends, Eremasi and Rye, for the first few weeks until it's too late to get a job and then find a babysitting gig or two to keep my parents happy, but this year, my parents jumped in and planned my summer for me. Yesterday was the last day of school. Last night, Mom pulled out the suitcases and made us pack. We're going to some kind of a reunion--with my grandmother. Today.

My grandmother isn't at all normal. She doesn't read mystery novels, or sing in a church choir, or knit, or sew. She doesn't do the Jumbles in the newspaper, and she hates crosswords. She isn't at all soft or plump, doesn't smell like cinnamon, pumpkin bread, or oatmeal cookies. My grandmother, Ms. Marey Lee Boylen, is not the cookie type.

She wears flippy auburn wigs, stiletto shoes, and padded push-up bras. Once, when we were little, my sister, Talitha, and I found a pair of panties in her bathroom with a fake butt. (We kept snickering, "Fanny pants!" at each other and busting up all afternoon. My mother finally made us go sit in the car.)

My grandmother has long, fake nails and a croaky hoarse drawl, and she's always holding a long, skinny cigarette--unlit, otherwise my dad will have a fit--between her fingers. She's loud and bossy and she drinks bourbon with lemon juice at dinner. She has a low-slung red coupe, and Dad says she drives like a bat out of hell. She's almost eighty, and she still lives by herself in a town house stuck on a cliff near the Golden Gate Bridge. She takes the bus so she can avoid parking tickets and walks everywhere else on strappy high-heeled sandals.

She talks to strangers. She asks questions--totally nosy ones--as if just because she's old, she can afford to be rude. She says what she thinks, she changes her mind every five minutes, and she laughs at me--a lot. She and I are completely different types of people.

I like predictability. I like maps, dictionaries, and directions. I like lists of things to do, knowing the answer, and seeing how everything fits. My grandmother is definitely one of those people who thrive on chaos and instability. She's what my mother calls a free spirit and what I call completely random.

She can't even go by a normal name. No one calls my grandmother Grandma or Granny or even Nana. When my parents got married, she said she didn't want anyone _calling her a mother-in-law. When my sister was born, my grandmother told Mom she didn't want anyone calling her a grandmother, either. They finally decided that the grandchildren were supposed to call her Mare, and that's what we all call her now, even my dad.

Mare. Mere. Like the French word for "mother." Which is just another example of how Mare is completely bizarre--I mean, we're not even French. And she's not our mother.

So going with her to a reunion is bad enough, but to make matters worse, we don't even really know where we're going. Mare has some whacked idea that it's more of an adventure if we just get in the car and drive east. And yeah, I said "car." See, since 2001, Mare won't fly--so we have to drive ALL ACROSS THE UNITED STATES.

In the middle of the baking-hot summer.

My grandmother, my sister, and me, all trapped in one car.
I'm not the only one who hates this idea. You should have heard my sister.

"They're your relatives, too," my mother reminded her. "And, Talitha, it's a long drive back east. It's not something your grandmother should attempt alone, and you know your dad can't take the time off of work until the end of June."

Mom shook her head. "You know Mare doesn't trust planes. She wants to see her people, so she's going to get in her car and drive to them."

"Oh, nice," Tali sighed. "This is just how I wanted to spend my summer break. With the slow and the dead."

"Talitha Marie," my mother had said in that dry-ice voice she uses. "Enough."

Tali had given my mother one last look and then yelled for Dad. But no matter who she whined to or argued with, the end result is the same: tomorrow, my sister and I are starting out on a 2,340-mile drive across the United States to somewhere in Alabama.

So much for summer vacation.

I'm not eager to see Mare, and neither is Tali, judging from the fact that she's sitting on the front porch with her backpack.

"Hey, what's Mare doing here already?" I ask, dropping my bag of library books on the step next to her. "Didn't she say we weren't leaving till eleven-thirty?"

Talitha shrugs, busily sending a text to one of her best friends, either Suzanne or Julie. "Don't know, don't care."

"Why are you waiting out here?"

"I'm not waiting. I'm texting, duh." Tali keeps her eyes on her cell.

I push up my sunglasses. "Well, if Mare wants somebody to wash her car, it's your turn."

"What?! She's never paid me anything!"

Tali glances up, her dark eyes barely visible above the edge of her blue-tinted sunglasses. "So? You should've asked."

Before I can answer, the front door swings open. "Girls, why are you outside? Mare's here."