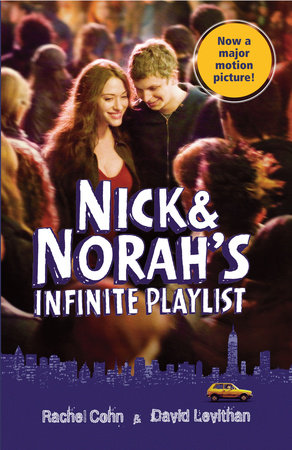 "I know this is going to sound strange, but would you mind being my girlfriend for the next five minutes?"

Nick frequents New York's indie rock scene nursing a broken heart. Norah is questioning all of her assumptions about the world. They have nothing in common except for their taste in music, until a chance encounter leads to an all-night quest to find a legendary band's secret show and ends up becoming a first date that could change both their lives.

Co-written by Rachel Cohn and David Levithan, co-author of WILL GRAYSON, WILL GRAYSON with John Green (THE FAULT IN OUR STARS), NICK & NORAH’S INFINITE PLAYLIST is a sexy, funny roller coaster of a story that reminds you how you can never be sure where the night will take you…

This movie tie-in edition also includes an 8-page photo insert from the film, as well as a map of Manhattan, detailing all of the sites Nick and Norah go to on their all-night date.
Read more
Read less
Read Excerpt
+ Add to My Bookshelf
+ Add to Goodreads

By David Levithan
1. NICK
I find Dev at the bar, talking to a guy our age who looks familiar in that Type kind of way. When I get to where they’re standing, I’m introduced as “the bass god, Nick,” and he’s introduced as “Hunter from Hunter.” Dev thanks me for being equipment bitch, and from the way the conversation doesn’t continue from there I know I’m interrupting. If it was Thom, my agitation would probably be noticed. But Dev needs you to spell emotions out for him, and right now I’m not in the mood. So I just tell him where I left the stuff and pretend I’m going off to search for a clear spot on the bar to summon the bartender from. And once I’m pretending that’ s the truth, I figure it might as well be the truth. I still can’t see Tris, and there’s a small part of me that’s wondering if it was even her in the crowd. Maybe it was someone who looked like Tris, which would explain the guy who didn’t look like anybody.

Are You Randy? stop playing their instruments one by one, until the lead singer croons a final, a cappella note. I wish for their sake I could say the club falls into silence at this, but in truth the air is one-half conversation. Still, that’s better than average, and the band gets a lunge of applause and cheers. I clap, too, and notice that the girl next to me puts two fingers in her mouth to whistle old-fashioned style. The sound is clear and spirited, and makes me think of Little League. The girl is dressed in a flannel shirt, and I can’t tell whether that’s because she’s trying to bring back the only fashion style of the past fifty years that hasn’ t been brought back or whether it’s because the shirt is as damn comfortable as it looks. She has very pale skin and a haircut that reads private school even though she’s messed it up to try to hide it. The next band opened for Le Tigre on their last tour, and I figure this girl’s here to see them. If I was a different kind of guy, I might try to strike up a friendly conversation, just to be friends. But I feel that if I talk to someone else right now, all I’ll be able to do is unload.

Thom and Scot would probably be ready to go if I wanted them to, but I’m pretty sure Dev hasn’t figured out yet whether he’s coming back with us or not, and I’d be an asshole to put him on the spot and ask. So I’m stuck and I know it, and that’ s when I look to my right and see Tris and her new guy approaching the beer-spilled bar to order another round of whatever I’m not having. It’s definitely her, and I’ m definitely fucked, because the between-band rush is pressing toward me now and if I try to leave, I’ll have to push my way out, and if I have to push my way out, she’ll see me making an escape and she’ll know for sure that I can’t take it, and even if that’s the goddamn truth I don’t want her to have actual proof. She is looking so hot and I am feeling so cold and the guy she’s with has his hand on her arm in a way that a gay friend would never, ever think of, and I guess that’s my own proof. I am the old model and this is the new model and I could crash out a year’s worth of time on my bass and nothing, absolutely nothing, would change.

She sees me. She can’t fake surprise at seeing me here, because of course she fucking knew I’d be here. So she does a little smile thing and whispers something to the new model and I can tell just from her expression that after they get their now-being-poured drinks they are going to come over and say hello and good show and–could she be so stupid and cruel?–how are you doing? And I can’t stand the thought of it. I see it all unfolding and I know I have to do something–anything–to stop it.

So I, this random bassist in an average queercore band, turn to this girl in flannel who I don’t even know and say:

“I know this is going to sound strange, but would you mind being my girlfriend for the next five minutes?”

2. NORAH
Randy from Are You Randy? insists the bassist from the queercore band is a ’mo, but I told him No, the guy is straight. Whether or not he’s responsible for his band’s shit lyrics (Fuck the Man / Fuck the Man–what’ s that trite crap?), I have no idea, but he’s ‘no ’mo. Trust me. There are certain things a girl just knows, like that a fourth minute on a punk song is a bad, bad idea, or that no way does a Jersey-boy bassist with Astor Place hair who wears torn-up, bleach-stained black jeans and a faded black T-shirt with orange lettering that says When I say Jesus, you say Christ, swing down boy-boy alley; he’s working the ironic punk boy—Johnny Cash angle too hard to be a ’mo. Maybe he’s a little emo, I told Randy, but just because he doesn’t look like a Whitesnake-relic-reject like all of your band, does not automatically mean the guy’s gay.

The incidental fact of his straightness doesn’t mean I want to be NoMo’s five-minute girlfriend, like I’m some 7-Eleven quick stop on his slut train. Only because I am the one loser here who hasn’ t lost all her senses to beer, dope, or hormones do I have the sense to hold back my original instinct–to yell back “FUCK, NO!” in response to NoMo’s question.

I noticed NoMo loading equipment after his band’s set while his bandmates abandoned him to score some action. I understand that scene. I am that scene, cleaning up everyone else’ s mess.

NoMo dresses so bad–he has to be from Jersey. And if Jersey Boy is equipment bitch, he has a van. The van’s probably a piece of scrap metal with a leaking carburetor that as likely as not will pop a tire or run out of gas in the middle of the Lincoln Tunnel, but it’s a risk I have to take. Somebody’s got to get Caroline home. She’ s too drunk to risk taking her on the bus. She’s also so drunk she’ll go home with Randy if I’m not there to take her back to my house where she can sleep it off. Groupie bitch. If I didn’t love her so much, I’d kill her.

From behind him I don't see Caroline but I do see that stupid bitch, Tris, rhymes with bris, cuz that's what she'll do to a guy, rip apart his piece. She's doing her Tris strut with her big boobs sticking out in front of her, wiggling her ass in that way that gets the instant attention of every dumb schmo in her wake, even the gay boys, who seem to be highly represented here tonight, NoMo notwithstanding. She's coming right toward me. No No NOOOOOOOOOOO. How did she find out Caroline and I would be here tonight? Does she have lookouts with text pagers set up every place Caroline and I go on a Saturday night, or what?
Boyfriend to the rescue! I answer NoMo's question by putting my hand around his neck and pulling his face down to mine. God, I would do anything to avoid Tris recognizing me and trying to talk to me.