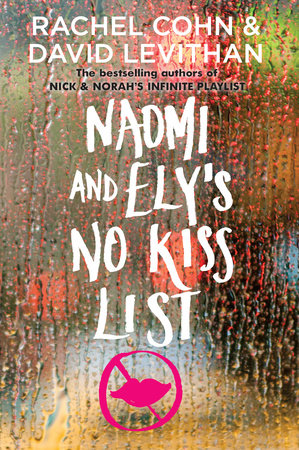 From the New York Times bestselling authors of NICK & NORAH’S INFINITE PLAYLIST, NAOMI AND ELY’S NO KISS LIST is the quintessential Girl-Likes-Boy-Who-Likes-Boys story.

Naomi and Ely are best friends. Inseparable since childhood. Naomi is straight. Ely is gay. Naomi dates guys who she claims to like. They’re okay, but she likes Ely more.

To protect their feelings, Naomi and Ely created a No Kiss List—a list of people neither of them is allowed to kiss under any circumstances. Naomi’s latest boyfriend Bruce isn’t on that list. But he probably should have been. Because when Ely kisses Bruce, it breaks Naomi’s heart. The result? A rift of universal proportions. Can these best friends come together again, or will this be end of Naomi and Ely: the Institution?

Told in alternating voices using an array of emoticons and symbols by co-authors Rachel Cohn and David Levithan, co-author of WILL GRAYSON, WILL GRAYSON with John Green (THE FAULT IN OUR STARS), NAOMI AND ELY’S NO KISS LIST is the ultimate offbeat story about leaving room for every kind of love.
Read more
Read less
Read Excerpt
+ Add to My Bookshelf
+ Add to Goodreads

I lie all the time.

I lied to Mrs. Loy from the fourteenth floor when I assured her that I walked her dog three times a day and watered her plants while she went to Atlantic City to win the money for her son’s sad operation (or for her own elective plastic surgery— I’m not sure).

I lied to the co-op board of my family’s apartment building about my mom’s episode that left our living room wall in partial collapse soon after Dad left. I also backed up Mom’s lies to the board that we’d pay for the damage. Monkeys will fly outta my butt before we’ll be able to come up with the money to fix the fallout. The way I figure, if Mom and I aren’t bothered living in ruins, why should the co-op board care?

I lied to the NYU Admissions Committee that I care about my future and my education. I’m barely a year out of high school, and already I know this NYU deal is a losing proposition. I live out the college freshman lie to hold on to the only thing in my life that’s not in ruins—Ely.

I lied to Robin (Å) from psych class when I assured her that Robin (Ä) from that time at the Starbucks at Eighth and University Y her and will call her. There’s no $$$ for me to move into the school dorms, and Robin’s a sophomore with a rare single who goes home on the weekends and lets me use her place when I need to escape The Building. The apartment building where I’ve lived my whole life may be situated on prime Greenwich Village real estate, but escape from it is my prime priority: escape from parent drama or my lies or Mr. McAllister, the creepy up-and-down elevator man who lives down the hall from Mrs. Loy and who’s been ogling me since I was thirteen and my breasts first announced themselves in the elevator mirror.

I’ve lied to Mom every time I’ve told her I’ve stayed the night at Robin’s when really I’ve stayed over at my boyfriend’s dorm room. I lie to myself that I need to lie about my whereabouts. It’s not like Bruce the Second and I are doing it. We’re more about a & in bed, then turn out the light, and —just sleep—’til he leaves in the morning for his accounting class. I lie to him that I think accounting is a worthwhile subject to study.

I lied to Robin (Ä) when he won our chess game in Washington Square Park after that time with Robin (Å), and the price of my loss was my supposed obligation to answer Truth to his midnight question. Robin said he’d watched five men trip over themselves from checking me out, while I merely glared at them. Robin wanted to know if I use my beauty for good or evil. Evil, I assured him. Lie. Truth: I’m as pure as fresh snow over Washington Square Park on a winter morning, before the dogs and people and machines of this hard, hard city batter its perfect, peaceful beauty.

I lied to Bruce the Second when I promised we would have sex, the real kind, soon. Very soon. We’d barely made it to ` when his R.A. walked in and interrupted us. It felt like cheating on Ely.

I lied to Bruce the First when I let him believe he would be my first. Ely is supposed to be first. I can wait. Then maybe I’ll let Bruce the Second truly be second.

I lied to the three different men and one girl at the Astor Place Starbucks who eyed me in the wall mirror today and then wanted to sit in the empty chair opposite mine. I pretended I didn’t hear them through my ?. They could go Ë themselves elsewhere. I placed my feet up on the empty chair, to reserve it for Ely. Only Ely.

Ely calls my cell while I lie in wait for him. “I’m running late. Be there in about fifteen minutes. Hold my chair for me. Love you.” He hangs up before I can reply. I lie to Starbucks that I even drink Starbucks while lounging around in their chairs, killing time.

We’ve already survived so much together, what’s fifteen minutes more to wait for him? His absence is time gained to spool my un-truths.

I lied to Ely when I told him I forgive his mom for what happened between our parents. I lied to Ely that I’m happy for him since his parents worked things out and stayed together even though mine didn’t and now my dad lives not in The Building anymore, far away.

I lied to my mom that the damage is done but it’s fine if she needs to take her time to process the fallout before she can find her future. I lied by comforting her that I believe she’ll make it through. It’s not that I don’t think she can. She just doesn’t want to.

I lie to all the related parties when I let them believe Dad calls my cell to check in on me every week. Once a month (the odd-numbered ones) is more like it.

Dad’s not worried about me. He knows I have Ely.

Ely rarely leaves me, or ends a phone call, without first telling me “I love you.” It’s Ely’s way of saying “good-bye”—like a promise toward our future time together. I lie when I throw back the words “I love you, too.”

The complexity embedded in the different levels of meaning that go along with the words “I love you” ought to be a whole mindfuck of a video game, if anyone ever wanted to develop the concept.

Level 1: “I love you” to my mom, meaning I love you for giving me life, nurturing me, driving me crazy but still inspiring me, even through your heartache. Basic.

Level 2: “I love you” to my dad, said with sincerity that’s tinged with coldness, distrustful whether he can actually deliver on the sentiment when he returns it. Harder.

Level 3: The playful “I love you” I throw at my boyfriend when he waits for me outside my class with a hot coffee and a donut. This grade of “I love you” is understood to have no intent whatsoever of L-O-V-E luuuv. Our relationship is too new for that, and he understands this, too. When Bruce the Second says “I love you” after I . . . do certain things with him, he is careful to immediately divert away, like “I love you when you yell at the frat guys making too much noise down the halls when we’re alone in my room. You give most excellent bitch tirade, and now all those guys only envy me more. I love you for that.” Whatever.

Levels 4–9: Expressions of passion for the great loves of my life, like disco music, Snickers bars, the Cloisters, the NBA, stairwell games, the luck to have a life lived with Ely.

Here’s where the game gets trickiest.

Level 10 (but on a whole other plane, where maybe numbers can’t even exist): When I tell Ely “I love you,” but I’m not lying to him. I’m lying to myself. He absorbs my words as if they’re natural, coming from his best friend / almost-a-sister. And Player One: Naomi does mean it that way. Genuinely. But maybe other ways, too. The confusing and impossible ways.

Lies are easier to process.

I lied to Ely that I’m okay with gay. I am. Just not for Ely. He was supposed to belong to me in the Happily Ever After. Manifest destiny.

I lied to Ely that of course I recognized his true manifest destiny was the queendom of queerdom and hadn’t that been obvious all along? Right! And great! Except not! We’ve practically been promised to each other from childhood, grew up side by side, his family in 15J, mine in 15K. Naomi & Ely. Ely & Naomi. Never one without the other. Just ask any- one within a ten-block radius of the Fourteenth Street Whole Foods, where the entire Indian hot-bar section witnessed the disaster fallout between our two sets of parents. Naomi & Ely: played doctor (Å) / nurse (Ä) together; learned how to kiss while rehearsing in private for the lead roles in our junior high production of Guys and Dolls together; shared a locker and their high school experiences together; and chose to attend NYU together, chose to remain side by side at home instead of move into the nearby dorms, for reasons of cost efficiency and of Naomi & Ely co-dependency.

When Ely finally finds me at Starbucks, he’s breathless and red-cheeked from running in the winter cold. He collapses into the chair I’ve reserved for him.

I hand Ely the hot chocolate the Starbucks manager comped me. “Get up,” I tell him. “We gotta go.”

I grab his free hand and we’re off, right back outside onto the cold, hard pavement, where we immediately fall into the typical Naomi & Ely routine of hand-and-cup-holding, hurried-walking-and-talking-while-maneuvering-through-sidewalk-people lockstep.