By Adriana Mather On Tour
The delicious horror of Ransom Riggs and the sass of Mean Girls meets Titanic in this follow-up to the #1 New York Times bestseller How to Hang a Witch, in which a contemporary teen finds herself a passenger on the famous “ship of dreams”—a story made all the more fascinating because the author’s own relatives survived the doomed voyage.

Samantha Mather knew her family’s connection to the infamous Salem Witch Trials might pose obstacles to an active social life. But having survived one curse, she never thought she’d find herself at the center of a new one.

This time, Sam is having recurring dreams about the Titanic . . . where she’s been walking the deck with first-class passengers, like her aunt and uncle. Meanwhile, in Sam’s waking life, strange missives from the Titanic have been finding their way to her, along with haunting visions of people who went down with the ship.

Ultimately, Sam and the Descendants, along with some help from heartthrob Elijah, must unravel who is behind the spell that is drawing her ever further into the dream ship . . . and closer to sharing the same grim fate as its ghostly passengers.

Praise for How to Hang a Witch:

“Mather shines a light on the lessons the Salem Witch Trials can teach us about modern-day bullying—and what we can do about it.” —Bustle.com

“Strikes a careful balance of creepy, fun, and thoughtful.” —NPR

“I am utterly addicted to Adriana Mather’s electric debut. It keeps you on the edge of your seat, twisting and turning with ghosts, witches, an ancient curse, and—sigh—romance. It’s beautiful. Haunting. The characters are vivid and real. I. Could. Not. Put. It. Down.” —Jennifer Niven, bestselling author of All the Bright Places
Read more
Read less
Read Excerpt
+ Add to My Bookshelf
+ Add to Goodreads 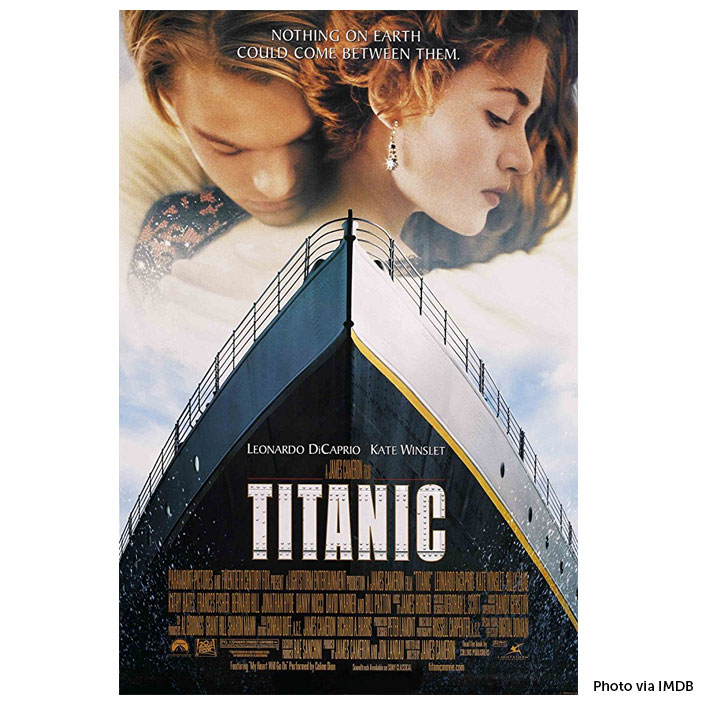 Behind the Scenes: Creating the Book Trailer for Haunting the Deep by Adriana Mather 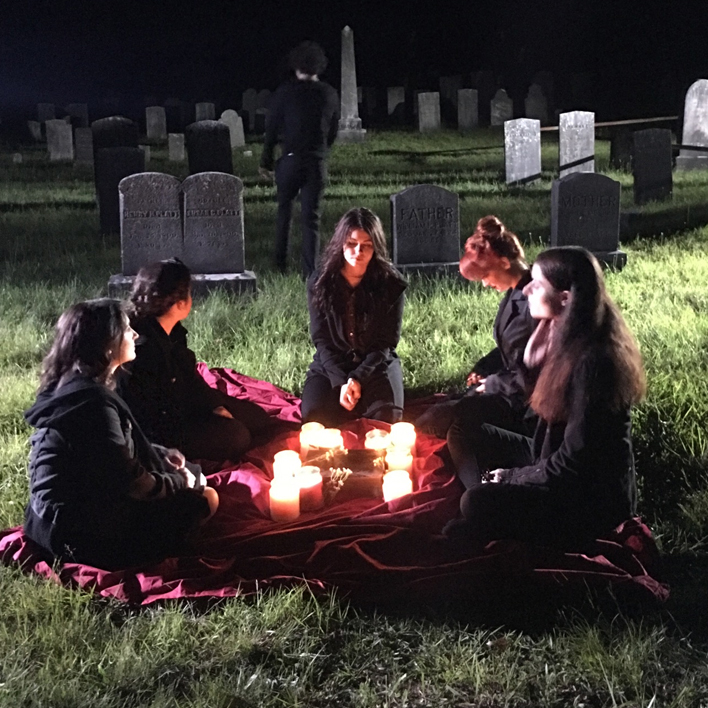 I sip my hot cocoa, not the powdered kind that comes out of a packet, but the shaved-chocolate kind made from scratch. Mrs. Meriwether places a plate of steaming croissants in the middle of my dining room table. They smell like warm butter.

Jaxon grins, poised to take a bite of French toast. “You’ve got that morning punk-rock thing going on again.”

I touch my hair and discover that I do in fact have a cowlick. I smile. “At least I don’t have toothpaste on my face.”

Jaxon makes no attempt to check if I’m right; he just chews away.

“Sam and Jax--Monday-morning match: round one,” my dad says, pouring a second cup of coffee into his #1 dad mug and looking at Mrs. Meriwether. “I think there’s a frightening possibility that our children take after us, Mae. Neighbors, best friends, surly dispositions.”

Mrs. Meriwether pats the corners of her mouth with a white cloth napkin. “The way I remember it, I was mostly an angel. It was your mother who had to threaten you with weeding the garden for a month just to keep your slingshot on your lap and off her table,” she says.

My dad smiles at her, and I stop chewing. His time in a coma felt like an endless walk down a dark tunnel. I’m sure I’ll eventually get used to him just sitting here drinking coffee and smiling. But for these past six months, every minute I’ve spent with him still feels like borrowed time.

My dad’s eyes twinkle with mischief. “Now, we all know it was your slingshot. You’re too young for your memory to be slipping. Maybe you should do more crossword puzzles.”

Mrs. Meriwether raises her eyebrows. “Be very careful, Charlie, or I’ll tell them about the time you tried to prank Ms. Walters. Emphasis on the word ‘tried.’ ” She looks at me and Jaxon. “I believe you know her as Mrs. Hoxley.”

“Wait, you pranked my homeroom teacher?” I ask. No wonder she’s always eyeing me like I’m about to do something wrong.

My dad shakes his head. He’s got that dignified and refined thing about him--gray at his temples, big brown eyes, confident. When he wants to, he can shut the world out behind his stoicism and clean button-downs. But right now he’s bright and alive, enjoying himself.

“I definitely want to hear this story,” Jaxon says.

My dad checks his watch. “Don’t you two need to get ready for school?”

“That bad, huh?” I say, and pick up a forkful of blueberries and whipped cream.

“Why are you wearing boys’ clothes?” asks a little girl’s voice just behind me. My fork drops with a clang, and a blueberry goes flying, hitting Jaxon smack in the face. I whip around in my chair.

A girl about ten years old stands a couple of feet away from me in an old-fashioned pink dress. Her brown hair is braided and tied with ribbons. She giggles, scrunching her dark eyes and small nose together as the blueberry sticks to Jaxon’s cheek. No one else is laughing but her.

Jaxon wipes his face and stares at me without looking in the girl’s direction. My skin goes cold. He doesn’t see her. I shut my eyes for a long second and take a breath, turning back to the table and away from the girl.

Jaxon, Mrs. Meriwether, and my dad all watch me with matching worried expressions.

“Is everything okay?” Mrs. Meriwether asks.

My hands shake, and I put them under the table. “Um, yeah.”

“Are you sure, Sam? You look spooked,” my dad says, all his good humor replaced with concern.

I glance behind me; the girl’s gone. My shoulders drop an inch. “I thought I heard something.”

My dad frowns. “What?” We’ve only talked once about what happened while he was in a coma. And I only told him selective pieces. How Vivian sold our New York City apartment and lied about his medical bills. How when I found out she was lying, she threatened my friends to manipulate me. How when she realized I wouldn’t do what she wanted, she tried to kill us with spells. And how those spells backfired on her. Mostly, he just listened with his eyebrows pushed forcefully together. When I finished, he had tears in his eyes. He told me to get some sleep, and he kissed me on the forehead. He doesn’t know how many people she killed. And I left out all the magical elements I could. Every time I said “spell,” he flinched like someone had burned him. There was so much guilt on his face that I hated telling him even the pared-down version. He hasn’t brought it up since. And I’m grateful, because I can’t stand being reminded that I lied to him. That was the first time I ever did.

“A ghost noise or a people noise?” Mrs. Meriwether asks.

My dad stiffens at the word “ghost.” Mrs. Meriwether and Jaxon know I saw Elijah, but he’s one of those details I never mentioned to my dad. How would I even start? Hey, Dad. I fell in love with this dead guy from the sixteen hundreds who was stubborn and beautiful. And then he disappeared and I had a crap time getting over him.

Mrs. Meriwether turns to my dad. “I really think she needs some training, Charlie. Otherwise, it’s just a loosey-goosey free-for-all. What happens when she learns to drive? What if a ghost appears in the seat next to her?”

I sit straight up, every muscle in my body ready to run away from this conversation. Did Mrs. Meriwether tell my dad about me seeing Elijah? Or did he hear the rumors in town? How could I be so stupid to think this would all just go away?

My dad stares at me with such seriousness that everyone gets quiet, waiting on his reaction. “Sam, did you see something just now?”

“No,” I say, doing my best to keep my anxiety out of my voice.

My dad’s home from the hospital, the kids in school don’t hate me, and with Vivian gone, my bad luck has basically vanished. Vivian. My stomach tenses. All I want is for things to stay normal; I’m happy for the first time in a long time.

My dad looks from Mrs. Meriwether to me. “Then why is Mae worried about a ghost appearing in your passenger seat?”

I push my plate away, avoiding the matching sympathetic looks from the Meriwethers. The words don’t want to leave my mouth. “I saw a spirit during the whole thing that happened last fall.” My cheeks redden. “But I haven’t seen one since.” I’m not seeing spirits again. I won’t. Elijah was different. He . . . he was just different.

The corners of my dad’s eyes wrinkle as he narrows them.

“Be sure to let us know if you do,” Mrs. Meriwether says. “The last time you saw a ghost, a whole set of unfortunate circumstances followed.”

My eyes meet hers. Is she saying that seeing a spirit is a bad omen?

“No more talk of . . . no more talk of training, Mae. She’s fine,” my dad says with such finality that Mrs. Meriwether raises a questioning eyebrow.

“I’m gonna go get dressed,” Jaxon says, sounding almost as uncomfortable as I feel and sliding his chair away from the table.

My dad leans back in his chair, and the tension rolls off him. “Aaah. Now, there’s the cranky morning Sam I know and love.”

I pause, soaking up his dad humor. He’s said some version of this to me since I was little. “Don’t do that. I can’t make anyone believe I’m angsty if I’m smiling.”

We share a smile, and I can tell he’s relieved to have changed the subject.

I push back my chair, but what I really want to push away is Mrs. Meriwether’s comment about the last time a spirit showed up.