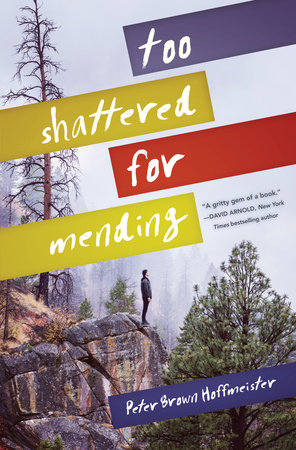 Too Shattered for Mending

By Peter Brown Hoffmeister
“The missing link between Looking for Alaska and Winter’s Bone.” —Jeff Zentner, author of The Serpent King.

“A portrait of the heart and will that's so tragic and beautiful it singes. . . . Enough to launch a thousand of those tweets that say 'I'm not crying, you're crying.'" —The New York Times Book Review

“Little” McCardell is doing all he can just to keep it together after the disappearance of his grandfather “Big” and the arrest of his older brother, JT. He’s looking out for his younger cousin, trying to stay afloat in school, working in the town graveyard for extra cash, and in his spare time he's pining after Rowan—the girl JT was dating until he got locked up. When the cops turn up asking questions about Big, Little doesn’t want to get involved in the investigation—he's already got enough to deal with—but he has no choice. Especially not after the sherriff's deputy catches him hunting deer out of season and threatens to prosecute unless he cooperates.

Soon Little finds himself drowning in secrets, beholden to the sheriff, to JT, to Rowan, and to Big’s memory, with no clear way out that doesn’t betray at least one of them. And when Little’s deepest secret is revealed, there’s no telling how it could shatter their lives.

“A powerful and uncompromising story . . .You will not soon forget Little McCardell or his unwavering spirit.” —Kathleen Glasgow, New York Times bestselling author of Girl in Pieces

★ "A story that is more than the sum of its parts. Proof that even in the darkness, there can be light." —Kirkus Reviews, starred

Too Shattered for Mending

I know the smell of pine loam moldering in the fall.

Watch a coyote hunt a house cat in the Chinese cemetery.

I know that Rowan loves JT, even after he beat her.

Rowan smells like water. I told her that once. I said, “You smell like an eddy.” I was thinking of the North Fork of the Clearwater. The backcountry runs, rocks and pools, clean enough to see the trout cut to shadow.

Rowan was drinking a Monster in front of the Mini-­Mart. She said, “A what?”

She’d sliced the knees out of her jeans, scissored them way back to the side, and I kept looking at all that exposed skin.

I said, “Like an eddy on the river, when you wade in. You know?”

She tilted her head, and the hair she’d pulled up bobbed to the left. “So I smell like a fish?”

She smiled, already shaking her head, laughing at me.

It was last school year. I was a freshman then, a year younger than her. I’d gotten more work in the cemetery and I imagined that I’d take her out, do something nice for her. Rowan was with JT but I tried to ignore that.

Rowan finished her Monster and threw the empty down on the cement. “I’ll see you around?” she said, and made a fish motion with her hand.