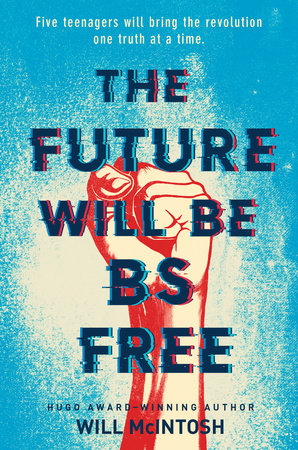 The Future Will Be BS Free

By Will McIntosh
In this terrifyingly timely tale for fans of The Eye of Minds, a teen and his group of friends find themselves on the run after using a genius lie-detector contraption to expose their corrupt government.

In a Putin-esque near-future America, the gifted and talented high school has just been eliminated, and Sam and his friends have been using their unexpected free time to work on a tiny, undetectable, utterly reliable lie detector. They're all in it for the money--except Theo, their visionary. For Theo, it's about creating a better world. A BS-free world, where no one can lie, and the honest will thrive.

Just when they finish the prototype and turn down an offer to sell their brainchild to a huge corporation, Theo is found dead. Greedy companies, corrupt privatized police, and even the president herself will stop at nothing to steal the Truth App. Sam sets his sights on exposing all lies and holding everyone accountable.

But he and his friends quickly realize the costs of a BS-free world: the lives of loved ones, and political and economic stability. They now face a difficult question: Is the world capable of operating without lies, or are lies what hold it together?

"Deserving of comparisons to The Hunger Games." --Kirkus

"The action is nonstop from beginning to end..a BS-free way to present a deep and fundamental question." --Booklist
Read more
Read less
Read Excerpt
+ Add to My Bookshelf
+ Add to Goodreads

The Future Will Be BS Free

By Will McIntosh
I stood in the middle of Rebe’s garage and took it all in. It was really happening. This wasn’t a school project, or a game—­this was real. And it. Was. Awesome.

Boob and Basquiat were hunched over a pair of linked PCs propped on the workbench. Rebe was typing frantically as lines of code appeared in the air in front of her. Molly was poring over brain scans. All I could see of Theo were his black hiking shoes and the cuffs of his brown corduroys sticking out of the MRI machine that took up most of one whole bay. Deathblow was blaring from Rebe’s portable stereo, the accompanying holographic video flashing above it.

We’d been working on the project for five months, but now that school was out, we were making serious progress.

Boob noticed me watching him. “You going to actually, you know, do something?”

“I am doing something,” I shot back. “I’m supervising.” I clenched my brow and folded my arms across my chest, striking a supervisory pose.

“Why don’t you go supervise me some lightning juice if you don’t have anything better to do.”

I tried to think of a witty reply, but nothing came, so I fetched Boob a can of Vitnik Energy Drink from a Styrofoam cooler half-­filled with tepid water and a few drowned bugs. Someone had mercifully peeled the labels off the cans, so I didn’t have to see President Vitnik’s face. The only reason we bought the energy drink was because Vitnik products were the cheapest, and tax-­free, to boot.

Rebe raised her hands in the air as Blacklight pulsed in the background. “I’m in. Oh, baby.”

I went and looked over her shoulder. “Terrific. In where?”

“The quantum processor at MIT. We still need more processing power, so I’m borrowing a little corner of MIT’s processor that they’re not using.”

I patted her back. “Nice.” Okay, borrow was probably not the most accurate word for what she was doing, but if we were going to do this, we needed to get creative.

The door to Rebe’s kitchen flew open. “Dinner!” Rebe’s mom screamed at her.

Rebe’s family seemed to communicate solely by screaming at each other. They didn’t seem mad, they just had issues with volume. No matter how loud she screamed, though, Rebe’s mom was one of my all-­time favorite people, and not just because she was letting us use her garage as our workshop.

“You guys can keep working,” Rebe said as she climbed the concrete steps. “I’ll be back in twenty minutes.” She didn’t need to tell us that. Unless her mom screamed at us to go home, nothing would stop us from working until curfew forced us to stop. It wasn’t like we had school tomorrow—­school had ended two weeks early due to lack of funds. And it wasn’t like we had anywhere else to go, since we were all suffering from a severe lack of funds ourselves.

Theo inched his way out of the MRI tube. It was a struggle for him to navigate the tight space because of his cerebral palsy. He was incredibly self-­conscious about it, though its effects weren’t as noticeable as he seemed to think. Theo walked with a limp, and his left hand was stiff and tended to curl in when he wasn’t using it. That was about the extent of it.

Theo sighed mournfully, perched on the edge of the MRI machine. “We’re never going to be able to make it small enough without a SQUID, and access to a 3-­D printer.”

Superconducting quantum interference devices were supersensitive detectors that could produce brain images using ultralow magnetic fields, which were the only kind you could generate from a distance.

“I don’t want to be the pin in our balloon, but any idea how we’re going to figure it out?” Basquiat asked.

Everyone had stopped what they were doing. All eyes were on me. “I mean, once we have the prototype, I’m going to find an investor for us to partner with us. Until then . . .” I hesitated, because I knew they weren’t going to like my solution. “We sell everything we own if we have to.”

Everyone started talking and howling and whining at once.

“I’m not selling my car,” Boob said over the cacophony. “Don’t even go there.”

Boob’s father had passed the Harley Air on to Boob when the lung damage he’d sustained from inhaling vermillion gas during the war finally caught up with him. Selling it could bring in two-­thirds of the money we needed.

Good old Mr. Kong. I missed him. When Boob was born, Mr. Kong was so excited and exhausted that when he filled out the birth certificate, he added an extra o to Bob. Eventually the mistake got fixed, but of course when people at school found out, everyone started calling Boob, Boob. Looking back on it now, it seems mean, but we were all so young the sting’s worn out of it.

Boob was laying out reason number six or seven for why he wasn’t selling his car when Molly cut him off.

“Do you really believe we can do this?” Molly asked him. “Because if we’re just playing at this, I don’t want to sell my things, either. In fact, I don’t want to waste my time working on this at all.” She shook her head. “There are a lot of things I’d rather be doing. But if we’re serious? What’s a few junkers and skis and stuff compared to the kind of money we’re talking about?”

Boob had been shaking his head through Molly’s entire speech. “I’m not selling my car.”

“When we’re up and running, I’ll buy you a Tesla seven,” I said. It was hard to imagine being able to afford a Tesla in today’s tar pit of an economy, but if we could pull this off, I would.

Boob made a chopping gesture with one hand. “Fine, if I sell my car, and all you’re selling are some comic books and sweatshirts you don’t wear anymore, I get more shares in the company.”

“No. No one gets more than anyone else. We’re even partners,” Theo said.

Boob gave an exasperated huff. “Of course you’re going to say that, you socialist.” He turned back to his work. I wasn’t sure whether that meant he was agreeing to sell his car or digging in his heels.

“It’s probably a good thing we’re running into this problem before we sink any more time into this project,” Molly said. “This is a good test.”

I caught Molly’s eye and nodded a silent thank you for her backing me. She smiled and turned to the workbench.

Because Molly was smallish and a little mousy-­looking, with sparkly brown eyes behind black-­rimmed glasses, guys tended to think she was sweet and approachable. But scratch the surface and you discovered a woman who would gladly hand you your nuts, still smiling sweetly, eyes still sparkling, if you pissed her off.

I was so madly in love with her it was ridiculous.