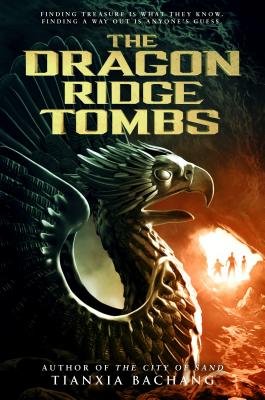 By Tianxia Bachang
The second book in China's multimillion-copy bestselling series takes readers on a treacherous journey to the depths beneath a mountain range, where ancient tombs are certain to contain riches but also rumored to be guarded by merciless supernatural forces.

Self-proclaimed gold hunter Tianyi, who has excellent feng shui skills, along with his best friend, Kai, and a shady antiques dealer called Gold Tooth, have traveled all the way from Beijing to Gulan in search of treasure in ancient tombs. But what they think will be a simple grab-and-go of loot turns into trouble when they are faced with a perplexing labyrinth of tunnels full of unexpected obstacles, traps, and deadly creatures that thwart their advancement, as well as their escape. As if that weren't enough, the return of their American friend Julie Yang, with whom they faced perils on a previous expedition, leads to a startling discovery--one tied to both China's ancient past and the Yang family's history, and one that could very well be the death of them all.

Translated from the Chinese by Jeremy Tiang, whose recent work includes NEVER GROW UP, the translation from Chinese of the autobiography from action movie superstar Jackie Chan.
Read more
Read less
Read Excerpt
+ Add to My Bookshelf
+ Add to Goodreads

After our last adventure in China’s Taklimakan Desert, I didn’t see Julie Yang for a while. She was busy arranging medical treatment for Professor Chen and dealing with the police about the members of our expedition who hadn’t made it back--sadly, our mission had ended with the professor’s assistant and three of his students falling victim to the curse of the Jingjue queen; they would now lie forever beneath the shifting desert sands. When the authorities questioned us, I was worried they’d find out my best friend, Kai, and I were gold hunters, so I said as little as possible. Archaeological expeditions are always risky, but four deaths and a professor who’d lost his mind raised serious suspicions.

Kai and I had rented a tiny apartment in Beijing and were trying to decide whether we could make a living from gold-hunting work. We were seventeen, neither of us headed to college. One night, as I lay in bed, there was a sharp knock on the door. Kai was out on the town, but I’d decided to stay home--I’d had bad dreams the night before, and my head was throbbing. I called out that I was coming, hoping it wasn’t another surprise visit from the cops.

I opened the door. It wasn’t anyone in uniform. It was Julie. I told her to come in quick and asked how she’d found me. She said Gold Tooth, an antiques dealer who had a stall at Pan Market, had given her our address.

“You know Gold Tooth?” I was startled.

“Not very well. My father used to collect artifacts and did some business with him. But Gold Tooth is friends with Professor Chen. I went to see him to track you and Kai down--​I still owe you money. I’m leaving the country with the professor in a couple of days to get him medical help in America, so I probably won’t see you for a while.”

Finally, Kai and I were getting paid! I thought it might be politer to refuse, though. “You’re going home? Is the professor any better?” I asked. “I’d just been thinking of visiting him. Don’t worry about the money for now. We didn’t do that much, after all.”

Julie plonked the cash on the table. “I’m paying you. That was our arrangement. But there’s something I hope you’ll agree to.

“Our ancestors were in the same line of work. My grandfather washed his hands of gold hunting because it brings terrible karma, and no matter how good your destiny is to start with, sooner or later you come to a bad end. I hope you’ll find something else to do. If there’s a way I could get you guys to the States, I could help arrange--”

“Thanks for the offer, but you only know half the story,” I interrupted, losing my temper. “There are two sides to every issue. Good things can turn bad, and bad things can turn good. That’s called dialectical materialism. You already know I’m a reverse dipper, so I might as well tell you the rest. I have principles. I’d never touch an ancient tomb that’s already been discovered and preserved. But deep in the forests and mountains are other graves no one knows about, all of them stuffed with valuables. These graves are impossible to find, except by people like me who know the secrets of feng shui. I’m gifted at reading the earth and the sky. If I didn’t look for these graves, they’d probably stay hidden underground forever. Don’t forget, I’m the one who found the lost city of Jingjue in the desert for you. But I would never damage any of these places, and it offends me when you imply that I don’t show the proper respect.”

Seeing that I was prepared to go on for quite a while, Julie held up a hand. “All right. I was just trying to give you some good advice, but you’re clearly not going to listen to what I say. I don’t think anyone in the world would defend reverse dipping the way you just did. Forget I said anything. I guess you won’t be wanting this money either.”

I hastily snatched the money she’d placed on the table. “A deal is a deal. Thanks for this. But let’s call it a loan. I’ll pay you back with interest, how about that?” She nodded curtly and stormed out, and I wondered if I’d gone too far. What would Kai make of this?

Later that evening, I sat watching as Kai counted the cash. Or rather, he tried to count it a few times but couldn’t reach a total. I didn’t blame him. It was a staggering amount, more than we’d ever seen.

Finally, Kai tossed the bundle of bills onto the table. “Tianyi, I thought you were the clever one,” he grumbled. “Why did you have to go and say this was a loan? Tell you what, let’s just spend it all, and then we’ll go stay with my relatives down south. Julie will never be able to find us there.”

“You’re useless,” I snorted. “Who cares about the money? Once we go reverse dipping, the treasures we find will be more than enough to pay Julie back. Plus, we can buy all the equipment we need, not to mention stop worrying about where our next meal is coming from. Starting now, we’re on a mission. Let’s get ready for a big haul.”

We began planning right away. The remote tombs I had in mind wouldn’t be easy to find--who knew how long it would take us? This was a good sum of money, but it would run out eventually.

Kai was more pragmatic. He reckoned Gold Tooth was doing well with his antiques business--especially since a lot of his clients were foreigners. The tourists were better informed and harder to cheat these days, but as long as you had high-quality stuff, they were definitely willing to empty their wallets.

“How about if we opened our own shop?” said Kai. “Get some old things to sell, and if it goes well we won’t need to do any reverse dipping. Breaking into tombs might be quick money, but it’s a lot of hard work.”

I nodded. “Not a bad idea, Kai. Turns out your brain does work sometimes. We’ve got the capital, after all. Let’s start small, and we can learn the antiques trade as we go.”

The next day, we went off to find a shop to rent, but we couldn’t find anything suitable. Then we realized we might have aimed too high and decided a stall in Pan Market would do just as well.

Pan Market was famous for the sheer variety of goods on offer. Extremely valuable antiques weren’t common, however; they tended to sell in private deals, rather than being displayed in the street for everyone to gawk at.

Following Gold Tooth’s advice, we went out into the suburbs in search of early Qing dynasty pots and bowls, old coins, snuffboxes, pocket watches, and other small items to sell. Unluckily, I kept seizing on things that turned out to be worthless, and when I did find something special, I let it go for far too low a price. We ended our days with a loss.

At least we hadn’t spent too much money collecting the knickknacks, so we didn’t put much of a dent in our capital. The main thing was to train ourselves to see the true value of things. People spent years acquiring this knowledge, which I was starting to realize might be more complex than feng shui. We certainly weren’t going to get there overnight, but Gold Tooth said I was a natural.