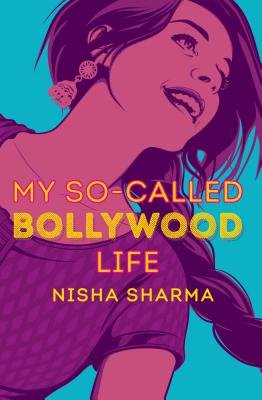 By Nisha Sharma On Tour
The romance of Stephanie Perkins meets the quirk of Maureen Johnson, then gets a Bollywood twist in this fate-filled debut that takes the future into its own hands.

Winnie Mehta was never really convinced that Raj was her soul mate, but their love was written in the stars. Literally, a pandit predicted Winnie would find the love of her life before her eighteenth birthday, and Raj meets all the qualifications. Which is why Winnie is shocked when she returns from her summer at film camp to find her boyfriend of three years hooking up with Jenny Dickens. As a self-proclaimed Bollywood expert, Winnie knows this is not how her perfect ending is scripted.

Then there's Dev, a fellow film geek and one of the few people Winnie can count on. Dev is smart and charming, and he challenges Winnie to look beyond her horoscope and find someone she'd pick for herself. But does falling for Dev mean giving up on her prophecy and her chance to live happily ever after? To find her perfect ending, Winnie will need a little bit of help from fate, family, and of course, a Bollywood movie star.

AN NPR BEST BOOK OF THE YEAR

"The perfect timepass for both the Bollywood-obsessed and filmi (melodrama) novices."-Teen Vogue
Read more
Read less
Read Excerpt
+ Add to My Bookshelf
+ Add to Goodreads

Kangana Ranaut’s blockbuster included all the elements needed to create a money-making masterpiece: a strong woman, a stupid man, and tons of girl power.

According to Google, a grave was supposed to be six feet deep, but Winnie Mehta didn’t want to put that much effort into digging. Besides, it wasn’t as if she was dumping an actual body or anything.

She stopped and surveyed the burial site she’d chosen in the woods behind her house. After dragging three boxes and a shovel up the hiking path, Winnie had already built up a layer of sweat, but she had a lot to do before she could go home.

As she marked the hole, her phone began vibrating in her pocket. She sent the call to voice mail when she saw her best friend’s face flash across the screen. That was Bridget’s seventh call in the last hour. Winnie wanted--no, needed--this moment, in which she stuck it to her stupid destiny, the wasted years she believed in true love, and, most importantly, to Raj, her cheating ex who’d hooked up with someone else while she was away at film camp. There was nothing Bridget could say that would change her mind.

It had been two months since Winnie had told Raj they needed a “break,” which wasn’t the same thing as a “breakup.” And even if they had broken up, a relationship blossoming from a childhood romance that became official when they were fourteen deserved more than three weeks of mourning before one party moved on to someone else. Even celebrities waited longer than that.

The thought caused her hands to tighten on her shovel. She rolled her shoulders, and with a warrior’s grunt, she started digging.

Stupid love story, stupid prophecy, stupid everything, she thought as she scooped up heaps of thick black soil. Since she was a kid, her family’s astrologer had predicted that Winnie’s soul mate would meet three unique criteria: his name would start with an R, he’d give her a silver bracelet as a sign of his love, and he’d cross paths with Winnie before her eighteenth birthday.

Identifying Raj as the man of her dreams wasn’t too farfetched, since they went to the same school and had grown up in the same community. Not to mention, he’d pulled out all the stops to get her to notice him when they were freshmen. For Winnie, accepting her destiny as truth and believing that her high school boyfriend was her soul mate for life was as easy as rattling off the top ten grossing Bollywood films per decade.

But then Raj changed. A lot. Three years later he wasn’t her hipster in shining armor anymore. He’d traded in his collection of graphic T-shirts for polos and his love of movie nights for the tennis team and STEM club.

She felt her chest constrict and her heart pound from the exercise and from remembering that moment when Raj had told her he wanted to go to school in Boston instead of New York. He’d followed that truth bomb by asking her to give up her dreams and move to Boston, too.

“Winnie! Winnie, are you out here?” Bridget’s voice echoed through the rustling trees and the sound of chirping birds. “I saw the drag marks from your car and across your backyard.”

“Shit,” she muttered. She started digging a little faster, tossing dirt in every direction.

“Okay, this is nuts,” Bridget yelled. “Where the hell are you?”

Winnie tried to block the sounds of branches snapping as she continued to create her movie grave. Out of the corner of her eye, she saw Bridget step into the clearing. Her blond hair was tied in a high ponytail, and her shorts and tank were streaked with dirt, as if she’d wrestled her way through the rain forest instead of a small wooded area in Princeton, New Jersey.

“Oh. My. God,” Bridget said as she pointed to the boxes. “Are those Raj’s movies? You can’t be serious! I get that I should’ve told you before you got back from camp this morning. It’s just that I wanted to talk to you about this whole thing in person. I know it’s a huge betrayal--”

Winnie froze. “ ‘Probably pissed’? Are you freakin’ kidding me?” She tossed the shovel to the ground and faced her friend. “No, I’d probably be pissed if I got a B in film class this year. I’d probably be pissed if I gained ten pounds and couldn’t fit into my prom dress. I’m murderous right now because my boyfriend broke up with me online while basically announcing that he cheated! Did you know that he even wrote a Facebook post? My parents and their friends are the only ones who check Facebook. It’s humiliating when your mother tells you that she saw the news on her feed. There are more people throwing me a pity party than extras in the movie Gandhi.”

Bridget put up her hands in surrender. “I totally didn’t know he was going to do that, but to be fair, I did warn you that he was hanging out with Jenny Dickens.”

The second she heard Jenny’s name, Winnie hocked a loogie. Well, she tried, but she ended up choking and coughing on her own spit.

“What the hell was that?”

“I can’t hear that man-stealing backstabber’s name without spitting,” Winnie said, pressing a fist to her chest. “It’s a demonstration of how I feel about her.”

Bridget snorted. “What movie did you see that one in?”

“It’s not funny, Bridget! Damn it, it wasn’t supposed to end like this.” To her horror, tears started to fill her eyes.

“Oh crap,” Bridget said, and scrambled forward. The second Winnie felt her friend’s tight hug, a sob broke through her throat. Then another followed, and another, until she couldn’t stop.

Bridget held her while she cried for the first time since she’d realized her love story was finally over. Memories circled in her mind like vultures. First kiss, themed dates, Bollywood marathons, film festivals, passionate arguments over movies. She knew that Raj believed in her prophecy because of all the effort that he’d invested in their relationship. Just when she’d started thinking that maybe Raj really was the answer to her family astrologer’s prediction for a happily-ever-after, he changed. Now their relationship was a short caption in a yearbook. They were the cliché high school romance.