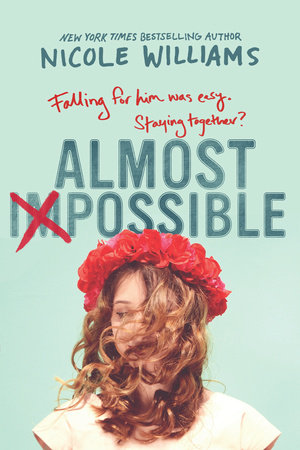 By Nicole Williams
Fans of Sarah Dessen, Stephanie Perkins, and Jenny Han will delight as the fireworks spark and the secrets fly in this delicious summer romance from a New York Times and USA Today bestselling author.

When Jade decided to spend the summer with her aunt in California, she thought she knew what she was getting into. But nothing could have prepared her for Quentin. Jade hasn't been in suburbia long and even she knows her annoying (and annoyingly cute) next-door neighbor spells T-R-O-U-B-L-E.

And when Quentin learns Jade plans to spend her first American summer hiding out reading books, he refuses to be ignored. Sneaking out, staying up, and even a midnight swim, Quentin is determined to give Jade days--and nights--worth remembering.

But despite their storybook-perfect romance, every time Jade moves closer, Quentin pulls away. And when rumors of a jilted ex-girlfriend come to light, Jade knows Quentin is hiding a secret--and she's determined to find out what it is.

By Nicole Williams
Anything was possible. At least that’s what it felt like.

Summer seventeen was going to be one for the record books. I already knew it. I could feel it—from the nervous- excited swirl in my stomach to the buzz in the air around me. This was going to be the summer—my summer.

“Last chance to cry uncle or forever hold your peace,” Mom sang beside me in the backseat of the cab we’d caught at the airport. Her hand managed to tighten around mine even more, cutting off the last bit of my circulation. If there was any left.

I tried to look the precise amount of unsure before answer- ing. “So long, last chance,” I said, waving out the window.

Mom sighed, squeezing my hand harder still. It was start- ing to go numb now. Summer seventeen might find me one hand short if Mom didn’t ease up on the death grip.

She and her band, the Shrinking Violets, were going to be touring internationally after finally hitting it big, but she was moping because this was the first summer we wouldn’t be together. Actually, it would be the first time we’d been apart ever.

I’d sold her on the idea of me staying in the States with her sister and family by going on about how badly I wanted to experience one summer as a normal, everyday American teenager before graduating from high school. One chance to see what it was like to stay in the same place, with the same people, before I left for college. One last chance to see what life as an American teen was really like.

She’d have her bandmates and tens of thousands of ador- ing fans to keep her company—she could do without me for a couple of months. I hoped.

It had always been just Mom and me from day one. She had me when she was young—like young young—and even though her boyfriend pretty much bailed before the line turned pink, she’d done just fine on her own.

We’d both kind of grown up together, and I knew she’d missed out on a lot by raising me. I wanted this to be a sum- mer for the record books for her, too. One she could really live up, not having to worry about taking care of her teenage daughter. Plus, I wanted to give her a chance to experience what life without me would be like. Soon I’d be off to college somewhere, and I figured easing her into the empty-nester phase was a better approach than going cold turkey.

“You packed sunscreen, right?” Mom’s bracelets jingled as she leaned to look out her window, staring at the bright blue sky like it was suspect.

“SPF seventy for hot days, fifty for warm days, and thirty for overcast ones.” I toed the trusty duffel resting at my feet.

It had traveled the globe with me for the past decade and had the wear to prove it.

“That’s my fair-skinned girl.” When Mom looked over at me, the crease between her eyebrows carved deeper with worry.

“You might want to check into SPF yourself. You’re not going to be in your midthirties forever, you know?”
Mom groaned. “Don’t remind me. But I’m already beyond SPF’s help at this point. Unless it can help fix a saggy butt and crow’s-feet.” She pinched invisible wrinkles and wiggled her butt against the seat.

It was my turn to groan. It was annoying enough that peo- ple mistook us for sisters all the time, but it was worse that she could (and did) wear the same jeans as me. There should be some rule that moms aren’t allowed to takes clothes from the closets of their teenage daughters.

When the cab turned down Providence Avenue, I felt a sudden streak of panic. Not for myself, but for my mom.

Could she survive a summer when I wasn’t at her side, reminding her when the cell phone bill was due or updating her calendar so she knew where to be and when to be there? Would she be okay without me reminding her that fruits and vegetables were part of the food pyramid for a reason and making sure everything was all set backstage?

“Hey.” Mom gave me a look, her eyes suggesting she could read my thoughts. “I’ll be okay. I’m a strong, empowered thirty-four-year-old woman.”

“Cell phone charger.” I yanked the one dangling from her oversized, metal-studded  purse,  which  I’d wrapped in hot

pink tape so it stood out. “I’ve packed you two extras to get you through the summer. When you get down to your last one, make sure to pick up two more so you’re covered—”
“Jade, please,” she interrupted. “I’ve only lost a few. It’s not like I’ve misplaced . . .”

“Thirty-two phone chargers in the past five years?” When she opened her mouth to protest, I added, “I’ve got the receipts to prove it, too.”

Her mouth clamped closed as the cab rolled up to my aunt’s house.

“What am I going to do without you?” Mom swallowed, dropping her big black retro sunglasses over her eyes to hide the tears starting to form, to my surprise.

I was better at keeping my emotions hidden, so I didn’t dig around in my purse for sunglasses. “Um, I don’t know? Maybe rock a sold-out international tour? Six continents in three months? Fifty concerts in ninety days? That kind of thing?”

Mom started to smile. She loved music—writing it, listen- ing to it, playing it—and was a true musician. She hadn’t got- ten into it to become famous or make the Top 40 or anything like that; she’d done it because it was who she was. She was the same person playing to a dozen people in a crowded café as she was now, the lead singer of one of the biggest bands in the world playing to an arena of thousands.