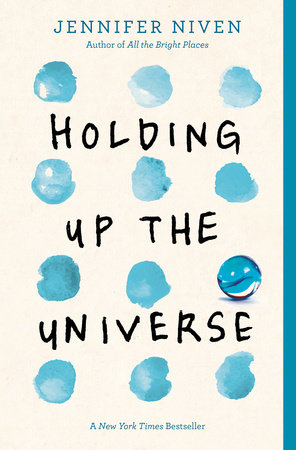 From the author of the New York Times bestseller All the Bright Places comes a heart-wrenching story about what it means to see someone—and love someone—for who they truly are.

Everyone thinks they know Libby Strout, the girl once dubbed “America’s Fattest Teen.” But no one’s taken the time to look past her weight to get to know who she really is. Following her mom’s death, she’s been picking up the pieces in the privacy of her home, dealing with her heartbroken father and her own grief. Now, Libby’s ready: for high school, for new friends, for love, and for EVERY POSSIBILITY LIFE HAS TO OFFER. In that moment, I know the part I want to play here at MVB High. I want to be the girl who can do anything.

Everyone thinks they know Jack Masselin, too. Yes, he’s got swagger, but he’s also mastered the impossible art of giving people what they want, of fitting in. What no one knows is that Jack has a newly acquired secret: he can’t recognize faces. Even his own brothers are strangers to him. He’s the guy who can re-engineer and rebuild anything in new and bad-ass ways, but he can’t understand what’s going on with the inner workings of his brain. So he tells himself to play it cool: Be charming. Be hilarious. Don’t get too close to anyone.

Until he meets Libby. When the two get tangled up in a cruel high school game—which lands them in group counseling and community service—Libby and Jack are both pissed, and then surprised. Because the more time they spend together, the less alone they feel. . . . Because sometimes when you meet someone, it changes the world, theirs and yours.

Jennifer Niven delivers another poignant, exhilarating love story about finding that person who sees you for who you are—and seeing them right back.

"Niven is adept at creating characters. . . . [Libby's] courage and body-positivity make for a joyful reading experience." --The New York Times

"Want a love story that will give you all the feels? . . . You'll seriously melt!" —Seventeen Magazine
Read more
Read less
Read Excerpt
+ Add to My Bookshelf
+ Add to Goodreads

If a genie popped out of my bedside lamp, I would wish for these three things: my mom to be alive, nothing bad or sad to ever happen again, and to be a member of the Martin Van Buren High School Damsels, the best drill team in the tristate area.

But what if the Damsels don’t want you?

It is 3:38 a.m., and the time of night when my mind starts running around all wild and out of control, like my cat, George, when he was a kitten. All of a sudden, there goes my brain, climbing the curtains. There it is, swinging from the bookshelf. There it is, with its paw in the fish tank and its head underwater.

I lie on my bed, staring up into the dark, and my mind bounces across the room.

What if you get trapped again? What if they have to knock down the cafeteria door or the bathroom wall to get you out? What if your dad gets married and then he dies and you’re left with the new wife and stepsiblings? What if you die? What if there is no heaven and you never see your mom again?

I tell myself to sleep.

I close my eyes and lie very still.

I make my mind lie there with me and tell it, Sleep, sleep, sleep.

What if you get to school and realize that things are different and kids are different, and no matter how much you try, you will never be able to catch up to them?

I open my eyes.

My name is Libby Strout. You’ve probably heard of me. You’ve probably watched the video of me being rescued from my own house. At last count, 6,345,981 people have watched it, so there’s a good chance you’re one of them. Three years ago, I was America’s Fattest Teen. I weighed 653 pounds at my heaviest, which means I was approximately 500 pounds overweight. I haven’t always been fat. The short version of the story is that my mom died and I got fat, but somehow I’m still here. This is in no way my father’s fault.

Two months after I was rescued, we moved to a different neighbor-hood on the other side of town. These days I can leave the house on my own. I’ve lost 302 pounds. The size of two entire people. I have around 190 left to go, and I’m fine with that. I like who I am. For one thing, I can run now. And ride in the car. And buy clothes at the mall instead of special-ordering them. And I can twirl. Aside from no longer being afraid of organ failure, that may be the best thing about now versus then.

Tomorrow is my first day of school since fifth grade. My new title will be high school junior, which, let’s face it, sounds a lot better than America’s Fattest Teen. But it’s hard to be anything but TERRIFIED OUT OF MY SKULL.

I wait for the panic attack to come.

Caroline Lushamp calls before my alarm goes off, but I let her go to voice mail. I know whatever it is, it’s not going to be good and it will be my fault.

She calls three times but only leaves one message. I almost delete it without listening, but what if her car broke down and she’s in trouble? This is, after all, the girl I’ve dated off and on for the past four years. (We’re that couple. That on-again, off-again everyone-assumes-we’ll-end-up-together-forever couple.)

Jack, it’s me. I know we’re taking a break or whatever but she’s my cousin. My COUSIN. I mean, MY COUSIN, JACK! If you wanted to get back at me for breaking up with you, then congratulations, jerkwad, you’ve done it. If you see me in class today or in the hallways or in the cafeteria or ANYWHERE ELSE ON EARTH, do not talk to me. Actually, just do me a favor and go to hell.

Two minutes later, Dave Kaminski sends a text to warn me that Reed Young wants to kick my face in for making out with his girlfriend. I text, I owe you. And I mean it. If I’m keeping score, Kam’s helped me out more times than I’ve helped him.

All this fuss over a girl who, if we’re being honest, looked so much like Caroline Lushamp that—at least at first—I thought it was her, which means in some weird way Caroline should be flattered. It’s like admitting to the world that I want to get back together with her even though she dumped me the first week of summer so that she could go out with Zach Higgins.

I think of texting this to her, but instead I turn off my phone and close my eyes and see if I can’t transport myself right back into July. The only thing I had to worry about then was going to work, scavenging the local scrap yard, building (mind-blowing) projects in my (kick-ass) workshop, and hanging out with my brothers. Life would be so much easier if it was just Jack + scrap yard + kick-ass workshop + mind-blowing projects.