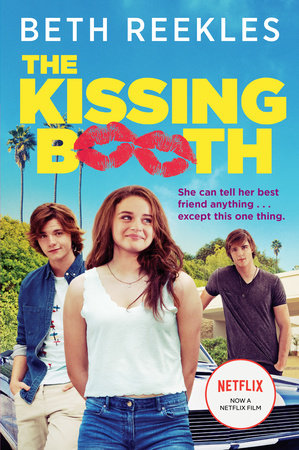 When Elle decides to run a kissing booth at her school's Spring Carnival, she locks lips with Noah and her life is turned upside down. Her head says to keep away, but her heart wants to draw closer. This romance seems far from a fairy tale.

Is Elle headed for heartbreak or will she get her happily ever after?
Read more
Read less
Read Excerpt
+ Add to My Bookshelf
+ Add to Goodreads

By Beth Reekles
‘Do you want a drink?’ Lee called from the kitchen as I shut the front door.

I’d never stop wondering at how big Lee Flynn’s house was; it was practically a mansion. There was a room downstairs complete with a fifty-inch TV and surround sound, not to mention the pool table, and the (heated) pool outside.

Even though I treated it like a second home the only place I felt really, really comfortable was in Lee’s bedroom.

I opened the door and saw the sunlight spilling in through the open doors leading to his small balcony. Posters of bands covered the walls, his drum kit sat in the corner next to a guitar, and his Apple Mac was proudly displayed on a smart mahogany desk that matched the rest of the furniture.

But, just like any other sixteen-year-old boy’s room, the floor was littered with T-shirts and underpants and stinky socks; a half-eaten sandwich festered next to the Apple Mac, and empty cans were strewn over almost every surface.

I launched myself onto Lee’s bed, loving the way it bounced.

We’d been best friends since we were born. Our moms both knew each other from college and I only lived a ten-minute walk away now. Lee and I had grown up together. We might as well have been twins: freakishly, we were born on the same day.

He was my best friend. Always had been and always will be. Even if he did annoy the hell out of me sometimes.

He turned up just at that moment, holding two opened bottles of orange soda, knowing I’d have drunk his at some point anyway.

‘We need to decide what we’re doing for the carnival,’ I said.

‘I know,’ he sighed, messing up his dark brown hair and scrunching up his freckled face. ‘Can’t we just do a coconut thing? You know, when they throw balls and try to knock the coconuts off?’

I smirked a little. ‘But we can’t. It’s already taken.’

‘Why do we have to come up with a booth anyway? Can’t we just manage the whole event and make other people come up with the booths?’

‘Hey, you’re the one who said being on the school council would look good on our college applications.’

‘You’re the one who agreed to it.’

‘Because I wanted to be on the dance committee,’ I pointed out. ‘I didn’t realize we had to work on the carnival too.’

‘I know. Oh, hey, what about if we hired one of those, um . . . you know’--I made a swinging gesture with my hands--‘those things with the hammer.’

‘Where they test your strength?’

‘No, they already ordered one of those.’

I sighed. ‘I don’t know then. There’s not much left--everything’s already taken.’

We looked at each other and both said, ‘I told you we should’ve started planning this earlier.’

We laughed, and Lee sat at his computer, spinning around on the chair slowly.

I gave him a deadpan look--well, I tried. It wasn’t easy to catch his eye when he was spinning around like that.

‘Fine,’ he grumbled. ‘Then what do you suggest?’

I shrugged. Truth was, I had no idea. We were pretty much screwed. If we didn’t come up with a booth, then we’d end up being booted off the council, which would mean we couldn’t put it on our college applications next year.

‘Then take off your sweater and come up with something.’

I rolled my eyes, and Lee started surfing Google for ideas for a booth for the Spring Carnival. I tugged my sweater off over my head, and felt the sun on my bare stomach. I tried to wriggle my arms back through so I could pull down the tank top I was wearing underneath . . .

He sniggered at me, and I heard him get up. At that moment the bedroom door was pushed open, and I thought for a minute he’d left me in a tangle, but the next second I heard a different voice.

‘Jeez, at least lock the door if you guys are going to do that.’

I froze, my cheeks going bright pink as Lee tugged down my tank top and yanked the sweater off my head, leaving my hair static.

I looked up to see his older brother leaning against the door frame, smirking at me.

‘Hey, Shelly,’ he greeted me. He knew I hate being called Shelly. I let Lee get away with it, but Noah was another matter entirely. He did it solely to annoy me. Nobody else dared call me ‘Shelly’, not after I had yelled at Cam for it in the fourth grade. Now everybody called me Elle, short for Rochelle. Just like nobody else dared call him ‘Noah’, except for Lee and his parents; everyone else called him by his surname, Flynn.

His jaw clenched and his dark eyebrows rose a little, like he was daring me to carry on calling him that. I just smiled back and the sexy smirk returned to his face.

Noah was just about the hottest guy to grace this earth; believe me, I’m not exaggerating. He had dark hair that flopped into his electric blue eyes, and he was tall and broad shouldered. His nose was a little crooked from when it was broken in a fight and didn’t set quite right--Noah wasn’t a stranger to fights, but he’d never been suspended. Aside from the occasional ‘scrap’, as Lee and I had taken to calling it, he was a model student: his grades never dropped below an A, and he was the star of the football team, too.

I used to have a crush on him when I was twelve or thirteen. It passed pretty quickly though, when I realized he was way out of my league and always would be. And even though he was unbelievably hot, I acted my normal self around him because I knew there wasn’t a chance in hell that he’d ever look at me as anything other than his kid brother’s best friend.