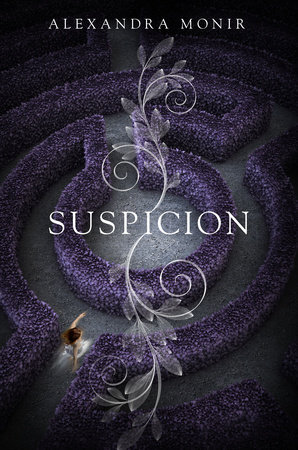 "If Alfred Hitchcock had directed Downton Abbey, the result would have been this book. Alexandra Monir takes us on a gripping, nonstop thrill ride with just the right amount of supernatural and an ending that you definitely won't suspect. I devoured it in one sitting." —Jessica Brody, bestselling author of the Unremembered trilogy

"Take The Princess Diaries and add magic, murder and mystery, and you've got SUSPICION." —Amy Plum, author of the of the international bestselling Die For Me series

“There’s something hidden in the maze.”

Seventeen-year-old Imogen Rockford has never forgotten the last words her father said to her, before he, her mother, and the gardens of her family’s English country manor were consumed by a blazing fire.

For seven years, images of her parents’ death have haunted Imogen’s dreams even as she moved away and attempted to start over. But some attachments prove impossible to shake—including her love for her handsome former neighbor Sebastian Stanhope. When a letter arrives that forces Imogen to return to her family’s estate, she quickly discovers the dark secrets that her father warned her about. At their center is Imogen herself—and Sebastian, the boy she never stopped loving.

The next afternoon finds us picnicking in the Shadow Garden, one of a dozen gardens nestled within the acres behind the main house. My favorite of them all, the Shadow Garden is the only patch of Rockford land that is closed to locals and tourists. A wrought-iron gate surrounds it, barring anyone without a key from entering.
I once asked Mum why the Shadow Garden wasn’t open to the public, and she explained that it’s so the family can have an outdoor retreat in the summer months, when Rockford Manor is crowded with day visitors. As much as I relish having the garden all to ourselves, I feel a pang of sadness at the thought of so few people getting to experience its beauty.
A petal-strewn gravel path divides the garden into two symmetrical sections, with lush meadows on either side, flanked by cherry blossom trees. The tree branches stretch out to meet each other, forming a canopy of evergreen leaves and pink blossoms overhead and creating the dancing shadows on the grass that give the garden its name. It’s in this enchanting setting that the family gathers for afternoon tea, with a monogrammed blanket carpeting the grass and Mrs. Mulgrave and Maisie setting up a towering tea table laden with scones, finger sandwiches, and pastries.
As Dad chats animatedly with Grandfather, Uncle Charles, and Aunt Philippa, Mum pulls me onto her lap and begins rebraiding my unruly blond hair. I’m looking around for Lucia, wondering where she disappeared to, when I notice the twinkle in Mum’s eyes and the knowing smile on her lips.
“The Stanhopes are here,” she says in my ear.
I draw in a sharp breath, quickly hopping off Mum’s lap before Sebastian can find me in such a babyish position. It’s bad enough that I’m a mere ten years old when he’s almost a teenager--I have to at least act grown-up.
The grass clings to my bare feet as I stand smiling, watching Sebastian Stanhope follow his younger brother, Theo, and their parents, the Earl and Countess Stanhope, through the gate and into the garden.
Sebastian’s family lives at Stanhope Abbey in the nearby town of Great Milton, and they’ve been close friends of the Rockfords since before my parents were even born. “It’s an inherited friendship,” Dad once joked. “Two great families drawn together, for better or worse, by nothing more than proximity and influence.” To me, the Stanhopes are far more than that. Especially Sebastian.
While the boys at my school in New York pay zero attention to me, Sebastian has been my friend for as long as I can remember. He held on to me so I wouldn’t fall the first time I rode a bike, and every summer he’s included me in his games and laughs. I feel a thrill whenever he pulls up a seat beside me, full of questions about my life in America and always calling me by the nickname he gave me, the name that only he is allowed to use: Ginny. Sebastian is different from any other boy I know; he’s like a splash of color on a dull landscape. Maybe that’s why he’s the only boy I’ve ever wanted to know.
Just as I realize I’m staring a little too openly, Sebastian catches my eye and grins. I’m about to run over to him, when I see a lithe blond figure darting through the trees in his direction. Lucia.
Lucia beams at Sebastian as they greet each other, and she looks prettier than I’ve ever seen her. His smile softens, his expression turning suddenly shy. Their eyes rest on each other a moment too long, neither of them making a move to turn away--and I feel a slightly sickening twinge in my stomach. Has something changed since my last visit?
I can remember perfectly Lucia’s words from last summer: “He’ll be an earl when he grows up, and his parents are good friends with mine--but other than that, he’s just a silly boy like all the rest.”
This summer’s Lucia seems to be singing an entirely different tune. She boldly takes Sebastian’s hand, leading him to sit beside her on the outskirts of our picnic circle. My mouth falls open at the sight of them.
“Jolly good to see you, Imogen!”