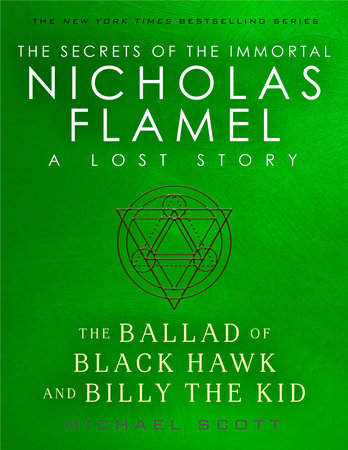 The Ballad of Black Hawk and Billy the Kid

By Michael Scott
On Sale 02.02.21
Nicholas Flamel appeared in J. K. Rowling’s Harry Potter series—but did you know he really lived? And he might still be alive today! Discover the truth behind Michael Scott’s New York Times bestselling series the Secrets of the Immortal Nicholas Flamel with “The Ballad of Black Hawk and Billy the Kid,” an ebook original short story.

Billy the Kid is immortal. And his long life has led him down many strange and winding paths—one of which will bring him face to face with another legendary warrior, Black Hawk, for the first time.

An immortal Anasazi sorceress is on the loose, and it’s up to Black Hawk and Billy the Kid to stop her from wreaking havoc on the Americas. The woman has already destroyed her own tribe. She’s determined to wipe out Black Hawk’s people, too. But first, she’ll have to defeat him, and that’s proving more difficult than the sorceress could have ever imagined.

Read the whole series!
The Alchemyst
The Magician
The Sorceress
The Necromancer
The Warlock
The Enchantress