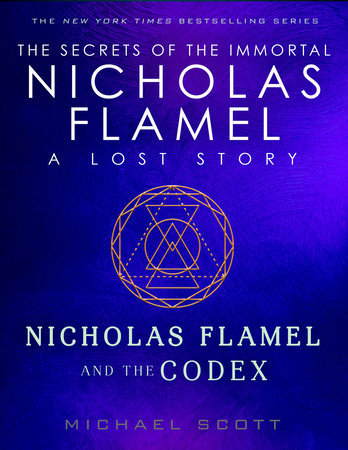 Nicholas Flamel and the Codex

By Michael Scott
On Sale 09.22.20
Nicholas Flamel appeared in J. K. Rowling’s Harry Potter series—but did you know he really lived? And he might still be alive today! Discover the truth behind Michael Scott’s New York Times bestselling series the Secrets of the Immortal Nicholas Flamel with the lost story “Nicholas Flamel and the Codex,” an ebook original short story.

Before Nicholas Flamel became the most famous alchemist who ever lived, he was merely a mortal—until the day a mysterious hook-handed man sold him a book and changed his life, and the world, forever.

The Codex helped Nicholas and Perenelle Flamel unlock the secrets of immortality. But first, it almost killed them. With this exclusive ebook, Michael Scott offers readers a never-before-seen short story from the world of the bestselling Secrets of the Immortal Nicholas Flamel series: the tale of how the Flamels became to be Guardians of the Codex through Nicholas’s first encounter with Marethyu, the hook-handed man—and their subsequent battle with John Dee’s legendary predecessor, the devious Dr. Mirabilis: Sir Robert Bacon and his mechanical man.