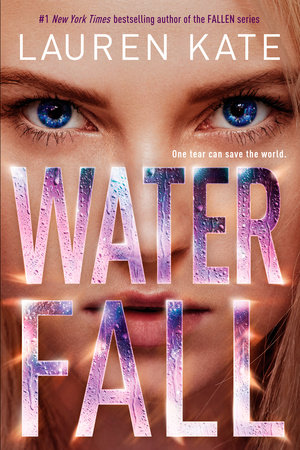 From the #1 New York Times bestselling author of the Fallen series comes Waterfall, a novel about love, betrayal, and epic consequences—a world-altering tale told by a girl whose tears have the power to raise the lost continent of Atlantis.

Eureka’s tears have flooded the earth, and now Atlantis is rising. Eureka is the only one who can stop Atlantis’s evil king, Atlas, but first she must learn how to fight. With her friend Brooks now lost to her forever, Eureka travels across the ocean with Cat, her family, and the gorgeous and mysterious Ander.
Trying to make sense of the dark world her sorrow has created, Eureka discovers a soul-crushing secret. If she’s strong enough, she can use it to defeat Atlas—unless her broken heart is just what he needs to fuel his rising kingdom. . . .
In Waterfall, Eureka has the chance to save the world. But she’ll have to give up everything—even love.

Starling opened her mouth to catch the raindrops falling through the hole in her cordon. The Seedbearer’s transparent sanctuary was pitched over the bonfire like a camper’s cozy tent. It sealed out the deluge, except for the small opening at the top meant to vent the fire’s smoke and admit a sample of the rain.

Starling smacked her lips, probing the rain for something else. She closed her eyes and rolled the rain over her tongue like a sommelier sampling wine. She could not yet taste Atlantean spires interrupting sky. She could not taste the edges of Atlas, the Evil One.

This was good but confusing. Tears shed by the Tearline girl were meant to bring Atlantis back. Preventing those tears’ fall had been the Seedbearers’ single objective.

And what had happened? The flood was here, but where was its ruler? Eureka had brought the horse but not its rider. Had the Tearline swerved? Had something gone wrong in the right way?

Starling hunched over the fire and studied her nautical charts. Teardrops streamed down the cordon walls in sheets, accentuating the warmth and brightness of the citronella--scented space inside. If Starling had been someone else, she might have curled up with a mug of cocoa and a novel, let the rain lull her into another world.

If Starling had been someone else, old age would have killed her millennia ago.

It was midnight in the Kisatchie National Forest in central Louisiana. Starling had been waiting for the others since midday. She knew they would come, though they had not discussed this location. The girl had wept so suddenly. Her flood dispersed the Seedbearers along this vile new marsh, and there had been no time to plan their regrouping. But here was where it would happen.

Yesterday, before Eureka cried, this site had sat a hundred and fifty miles from the Gulf. Now it was a shard of dis-appearing coastline. The bayou—-its banks, dirt roads, dance halls, twisting live oak trees, antebellum mansions, and pickup trucks—-lay entombed in a sea of selfish tears.

And somewhere out there swam Ander, in love with the girl who’d done this. Resentment brewed inside Starling when she thought of the boy’s betrayal.

Beyond the flame’s glow, against the sideways rain, a shape emerged from the forest. Critias wore his cordon like a slicker, indiscernible to any but Seedbearer eyes. Starling thought he looked smaller. She knew what he was thinking:

What went wrong? Where is Atlas? Why are we still alive?

When he reached the edge of Starling’s cordon, Critias paused. Both of them braced for the rough blast that would signal their cordons joining.

The moment of their union struck like lightning. Starling crossed her arms to withstand the gale; Critias squeezed his eyes shut and struggled forward. Her hair waved like a cobweb against her scalp; his jowls flapped like flags.

Starling noted these unflattering aspects in Critias, saw him note the same in her. She reassured herself that Seed-bearers aged only when they felt affection.

“Venice is no more,” Starling said as Critias warmed his hands before the fire. She had coordinated what her taste buds told her with her charts. “Most of Manhattan, all of  the Gulf—-”

“Wait for the others.” Critias nodded into the darkness. “They are here.”

Chora staggered toward them from the east, Albion from the west, the storm glancing off their cordons. They approached Starling’s cordon and stiffened, girding themselves for the unpleasant entry. When Starling’s cordon had absorbed them, Chora looked away and Starling knew her cousin didn’t want to risk feeling nostalgic or pathetic. She didn’t want to risk feeling. It was how she had lived for thousands of years, never looking or feeling older than mortal  middle--aged.

“It doesn’t matter.” Albion sat down. His silver hair was soaked, his neat gray suit now mud--stained and torn.

“A million deaths don’t matter?” Critias asked. “Didn’t you see her tears’ destruction on your journey here? You have always said we were the protectors of the Waking World.”

“What matters now is Atlas!”

Starling looked away, embarrassed by Albion’s outburst, though she shared his vexation. For thousands of years the Seedbearers had struggled to prevent the rise of an enemy they had never met in the flesh. Long had they suffered the projections of his terrible mind.

Imprisoned in the sunken realm of the Sleeping World, Atlas and his kingdom neither aged nor died. If Atlantis rose, its residents would be restored to life exactly as they had been when their island sank. Atlas would be a strapping man of twenty years, at the zenith of his youthful power. The Rising would make time begin again for him.

He would be free to pursue the Filling.