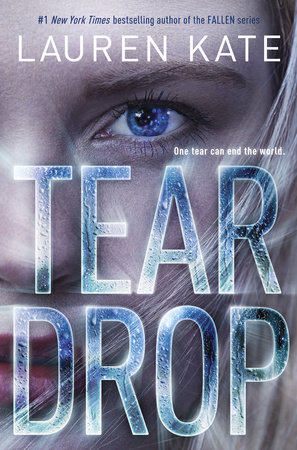 By Lauren Kate
An epic saga of heart-stopping romance, devastating secrets, and dark magic . . . a world where everything you love can be washed away. The first book in the Teardrop series from the #1 New York Times bestselling author of the Fallen series

Everywhere Eureka goes he is there: Ander, a mysterious blond boy who tells her she’s in danger. Ander knows things about Eureka she doesn’t yet know herself, but not her darkest secret: ever since her mother drowned in a freak accident, Eureka wishes she were dead, too. She has little left that she cares about, just her friend Brooks and some heirlooms—a locket, a letter, a mysterious stone, and an ancient book about a girl who got her heart broken and cried an entire continent into the sea.

But Ander has some secrets of his own. The haunting tale is more than a story. It’s real.
And Eureka’s life has far more evil undercurrents than she ever imagined.

“Plenty of danger, romance and intrigue to entertain . . .  terrific.”—Kirkus Reviews

“Mystery, romance and fantasy combine for an enchanting world.” —Teenreads.com

By Lauren Kate
In the stillness of the small beige waiting room, Eureka’s bad ear rang. She massaged it--a habit since the accident, which had left her half deaf. It didn’t help. Across the room, a doorknob turned. Then a woman with a gauzy white blouse, olive-green skirt, and very fine, upswept blond hair appeared in the lamplit space.

“Eureka?” Her low voice competed with the burbling of a fish tank that featured a neon plastic scuba diver buried to his knees in sand but showed no sign of containing fish.

Eureka looked around the vacant lobby, wishing to invoke some other, invisible Eureka to take her place for the hour.

Since Dad’s remarriage four years ago, Eureka had survived an armada of therapists. A life ruled by three adults who couldn’t agree on anything proved far messier than one ruled by just two. Dad had doubted the first analyst, an old-school Freudian, almost as much as Mom had hated the second, a heavy-lidded psychiatrist who doled out numbness in pills. Then Rhoda, Dad’s new wife, came onto the scene, game to try the school counselor, and the acupuncturist, and the anger manager. But Eureka had put her foot down at the patronizing family therapist, in whose office Dad had never felt less like family. She’d actually half liked the last shrink, who’d touted a faraway Swiss boarding school--until her mother caught wind of it and threatened to take Dad to court.

Eureka noted her new therapist’s taupe leather slip-ons. She’d sat on the couch across from many similar pairs of shoes. Female doctors did this little trick: they slipped off their flats at the beginning of a session, slid their feet back into them to signal the end. They all must have read the same dull article about the Shoe Method being gentler on the patient than simply saying time was up.

The office was purposefully calming: a long maroon leather couch against the shuttered window, two upholstered chairs opposite a coffee table with a bowl of those coffee gold-wrapped candies, a rug stitched with different-colored footprints. A plug-in air freshener made everything smell like cinnamon, which Eureka did not mind. Landry sat in one of the chairs. Eureka tossed her bag on the floor with a loud thump--honors textbooks were bricks--then slid down low on the couch.

“Nice place,” she said. “You should get one of those swinging pendulums with the silver balls. My last doctor had one. Maybe a water cooler with the hot and cold taps.”

“Never mind.” Eureka had already let slip more words than she’d intended to speak the whole hour. She was nervous. She took a breath and reerected her walls. She reminded herself she was a Stoic.

One of Landry’s feet freed itself from its taupe flat, then used its stockinged toe to loosen the other shoe’s heel, revealing maroon toenails. With both feet tucked under her thighs, Landry propped her chin in her palm. “What brings you here today?”

When Eureka was trapped in a bad situation, her mind fled to wild destinations she didn’t try to avoid. She imagined a motorcade cruising through a ticker tape parade in the center of New Iberia, stylishly escorting her to therapy.

But Landry looked sensible, interested in the reality from which Eureka yearned to escape. Eureka’s red Jeep had brought her here. The seventeen-mile stretch of road between this office and her high school had brought her here--and every second ticked toward another minute during which she wasn’t back at school warming up for that afternoon’s cross-country meet. Bad luck had brought her here.

Or was it the letter from Acadia Vermilion Hospital, stating that because of her recently attempted suicide, therapy was not optional but mandatory?

Suicide. The word sounded more violent than the attempt had been. The night before she was supposed to start her senior year, Eureka had simply opened the window and let the gauzy white curtains billow toward her as she lay down in her bed. She’d tried to think of one bright thing about her future, but her mind had only rolled backward, toward lost moments of joy that could never be again. She couldn’t live in the past, so she decided she couldn’t live. She turned up her iPod. She swallowed the remainder of the oxycodone pills Dad had in the medicine cabinet for the pain from the fused disc in his spine.

Eight, maybe nine pills; she didn’t count them as they tumbled down her throat. She thought of her mother. She thought of Mary, mother of God, who she’d been raised to believe prayed for everyone at the hour of death. Eureka knew the Catholic teachings about suicide, but she believed in Mary, whose mercy was vast, who might understand that Eureka had lost so much there was nothing to do but surrender.

She woke up in a cold ER, strapped to a gurney and gagging on the tube of a stomach pump. She heard Dad and Rhoda fighting in the hallway while a nurse forced her to drink awful liquid charcoal to bind to the poisons they couldn’t purge from her system.

Because she didn’t know the language that would have gotten her out sooner--“I want to live,” “I won’t try that again”--Eureka spent two weeks in the psychiatric ward. She would never forget the absurdity of jumping rope next to the huge schizophrenic woman during calisthenics, of eating oatmeal with the college kid who hadn’t slit his wrists deep enough, who spat in the orderlies’ faces when they tried to give him pills. Somehow, sixteen days later, Eureka was trudging into morning Mass before first period at Evangeline Catholic High, where Belle Pogue, a sophomore from Opelousas, stopped her at the chapel door with “You must feel blessed to be alive.”

Eureka had glared into Belle’s pale eyes, causing the girl to gasp, make the sign of the cross, and scuttle to the farthest pew. In the six weeks she’d been back at Evangeline, Eureka had stopped counting how many friends she’d lost.