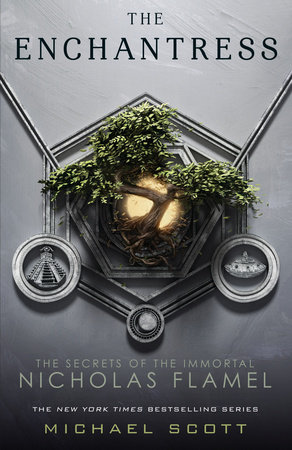 Nicholas Flamel appeared in J.K. Rowling’s Harry Potter—but did you know he really lived? And his secrets aren't safe! Discover the truth in book six of Michael Scott’s New York Times bestselling series the Secrets of the Immortal Nicholas Flamel.

The Location: The home of the Elders.

The Time: The last day of Nicholas and Perenelle Flamel's long existence.

The two that are one must become the one that is all. One to save the world, one to destroy it.
Sophie and Josh Newman traveled ten thousand years into the past following Dr. John Dee and Virginia Dare to the home of the Elders at Danu Talis. But this is no ordinary island--it is the legendary city of Atlantis, and Scathach, Prometheus, Palamedes, Shakespeare, Saint-Germain, and Joan of Arc are also there.    Here, as the Flamels take their final breaths, the battle for the world begins and ends. Except no one is sure what--or who--the twins will be fighting for.

By Michael Scott
Chapter One

The small crystal mirror was ancient.

Older than mankind, it predated the Elders, the Archons and even the Ancients who had come before them. This was an Earthlord artifact, washed up when the Isle of Danu Talis was ripped from the primeval seabed.

For millennia the mirror had hung on a wall in a side room in the Palace of the Sun on Danu Talis. Generations of Great Elders, and then the Elders who had come after them, had puzzled over the small rectangle of crystal in the plain black frame that was not wood, not metal, nor was it stone. Although it had all the appearance of a mirror, it wasn’t a true reflecting glass: its surface showed only shadows, though those who peered closely claimed they caught a hint of their skulls beneath their flesh, of the impressions of bones beneath skin. Occasionally--infrequently--some claimed to catch glimpses of distant landscapes, polar ice caps, expanses of deserts or steaming jungles.

At certain times of the year--at the fall and summer -equinoxes--and during solar and lunar eclipses, the glass would shiver and show scenes of times and places beyond comprehension and understanding, exotic worlds of metal and chitin, places where there were no stars in the heavens and a black sun hung unmoving in the skies. Generations of scholars spent their entire lives trying to interpret those scenes, yet even the legendary Abraham the Mage could not decipher its mysteries.

Then one day, when the Elder Quetzalcoatl was reaching out to straighten the glass, he had caught the side of his hand on the edge of the frame. He felt a sting and pulled away in surprise to see that he’d wounded himself. A single drop of blood spattered onto the crystal and suddenly the glass cleared, the surface rippling under the curling thread of sizzling blood. In that instant, Quetzalcoatl had seen wonders:

. . . the Isle of Danu Talis at the heart of a vast empire stretching unbroken across the globe . . .

. . . the Isle of Danu Talis burning and shattered, rent asunder by earthquakes, the great streets and massive buildings swallowed by the sea . . .

. . . the Isle of Danu Talis just visible beneath a sheath of ice, huge spike-nosed whales drifting over the entombed city . . .

. . . Danu Talis rising pure and golden in the center of a limitless desert . . .

The Elder had stolen the mirror that day and never returned it.

Now, slender and white-bearded, Quetzalcoatl spread a blue velvet cloth over a plain wooden table. He smoothed the cloth flat with a black-nailed hand, picking off threads and dust. Then he placed the black-framed rectangle of crystal in the center of the cloth and gently wiped it clean with the edge of his white linen shirt. The glass did not reflect the Elder’s hawk-nosed face: the polished surface twisted with a gray smoke-scape.

Quetzalcoatl leaned over the glass, pulled a pin from the sleeve of his shirt and pressed the tip of the pin into the fleshy pad of his thumb. “By the pricking of my thumbs . . . ,” he muttered in the ancient language of the Toltec. A ruby droplet of blood slowly gathered on his smooth flesh. “. . . something wicked, this way comes.” Holding his hand out over the glass, he allowed the drop to spatter onto the mirror. The surface instantly trembled and shimmered, the ancient crystal running with a rainbow of oily colors. Red smoke steamed off the glass; then the colors settled into images.

Millennia of experimentation and vast quantities of blood--very little of it his--had taught the Elder how to control the images in the crystal. He had fed it so much blood that he had come to believe that it was somehow sentient and alive. Staring into the glass, he murmured, “Take me to San Francisco.”

The mirror blurred, then washed with white and gray light, and suddenly Quetzalcoatl found himself floating high over the city, looking down over the bay.

“Why isn’t it burning?” he wondered aloud. “Why are there no monsters in the streets?” He had permitted the immortal humani Machiavelli and Billy the Kid to return to San Francisco in order to release the creatures on Alcatraz Island into the city. Had they failed in their mission? Or was he too early?

The image in the crystal shifted once again and settled on the narrow length of Alcatraz, and Quetzalcoatl spotted a line of movement in the water. A shape moved across the bay, leaving the smudge of Alcatraz and heading toward the city. Quetzalcoatl rubbed his hands together. No, he wasn’t too late: he was just in time to witness a little chaos. It had been a long time since he had seen a city destroyed, and he did love a spectacle.

The color image suddenly flickered and faded. The Elder pierced his finger with the pin again and then again, dripping more of his lifeblood onto the glass, feeding it. The mirror blinked to life once more and the image of the city re-formed, three-dimensional in its clarity. Quetzalcoatl focused and the image spun downward, pulling him toward choppy white-capped water. A creature lurked beneath the waves, something huge and sinuous: a sea serpent. The Elder squinted. It was hard to make out any details, but it seemed as if the creature had more than one head. He nodded in approval; he liked that. It was a nice touch. It made sense to send the sea creatures to the city first. He smiled, showing savage teeth as he imagined the monster rampaging through the streets.

Quetzalcoatl watched the sea serpent sweep across the bay and curl toward one of the piers that jutted out into the water. He frowned and then nodded in understanding. It would crawl ashore on the Embarcadero. Excellent: lots of tourists, high profile.

Light shifted on the sea. He spotted the faintest shimmer of a blue and red oily stain on the water and abruptly realized that the sea serpent was heading straight for it.

Unconsciously, Quetzalcoatl dropped lower still. His head dipped toward the glass, hawk nose almost touching the surface. He could smell the sea now, salt with the faintest hint of rotting fish and seaweed . . . and something else. Closing his eyes, he breathed deeply. A city should smell of metal and traffic, burnt food and too many unwashed bodies. But what was he smelling here--these were odors that had no place in the city: the tartness of mint, the sweetness of aniseed, the flowery scent of green tea.

Realization struck him as the monstrous creature--the Lotan--rose from the sea, seven heads darting toward the swirling red and blue stain on the water. Quetzalcoatl recognized the auras and the colors now: the red was Prometheus, while the blue was the immortal humani Niten. And the sickening odor of mint in the air could belong to only one man: the Alchemyst, Nicholas Flamel.

Quetzalcoatl saw them then, standing on the end of a pier. And yes, the woman was there also, Perenelle the Sorceress, whom he knew from bitter experience. His tongue automatically found the space in his teeth where she’d knocked out one of his big back molars. This was not good, this was not good at all: a renegade Elder and three of the most dangerous and deadly humani in the Shadowrealm.

Quetzalcoatl’s hands clenched into tight fists, razor-sharp nails biting into the flesh of his palms, dripping thin blood onto the glass, keep the images alive. His dark eyes watched unblinkingly.

. . . the creature rising from the water, balancing on its tail, all seven heads darting in to feed, mouths agape . . .

. . . the flash of green fire and the overwhelming stink of mint.

“No!” the Elder hissed as he watched the Lotan transform into a small blue-veined egg. He saw the egg drop into the Alchemyst’s outstretched hand. Flamel tossed it triumphantly in the air . . . and a circling seagull snatched it and swallowed it whole.

“No! Nonononono . . .” Quetzalcoatl howled his rage, his face darkening, contorting into the flat serpent image that had terrified the Maya and the Aztec. Ragged teeth jutted from his mouth, his eyes narrowed and his dark hair stiffened in spikes about his face. He pounded on the table, the ancient wood cracking and only his lightning-fast reflexes saved the mirror from falling to the floor and shattering.

As quickly as it had begun, the rage passed.

Quetzalcoatl breathed deeply and ran a hand through his stiff hair, flattening it. All Billy and Machiavelli had to do was to release a few monsters into the city--three or four would have sufficed. Two would have been fine; even one, preferably something big with scales and teeth, would have been a start. But they’d failed, and they would pay for that failure later--if they survived!

He needed to get the beasts off the island, but to do that he would have to keep the Flamels and their Elder and immortal friends busy.

It was obviously time now for Quetzalcoatl to take matters into his own hands. A sudden smile revealed the Elder’s needlelike teeth. He had collected a few pets in his Shadowrealm--the humani would call them monsters--and he could allow them out to play. But no doubt the Alchemyst would deal with them in the same way he’d dealt with the Lotan. No, he needed something bigger, something much more dramatic than a few mangy monsters

Quetzalcoatl found his cell phone on the kitchen table. He dialed the Los Angeles number from memory. It rang fifteen times before it was answered with a snarling rasp. “Do you still have that bag of teeth I sold you millennia ago?” Quetzalcoatl started in. “I’d like to buy it back. Why? I want to use it to teach the Flamels a lesson . . . and of course keep them busy while I get our creatures off the island,” he added hastily. “How much for the bag? Free! Well, yes, of course you can watch. Meet me at Vista Point; I’ll make sure there are no humani around.