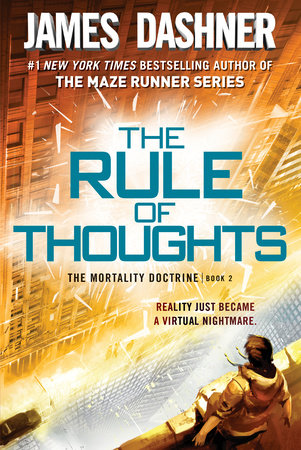 The Rule of Thoughts (The Mortality Doctrine, Book Two)

By James Dashner
From James Dashner, author of the #1 New York Times bestselling MAZE RUNNER series, comes the second book in the bestselling Mortality Doctrine series, an edge-of-your-seat cyber-adventure trilogy that includes The Eye of Minds and The Game of Lives.

Includes a sneak peek of The Fever Code, the highly anticipated conclusion to the Maze Runner series—the novel that finally reveals how the Maze was built!

Michael thought he understood the VirtNet, but the truth he discovered is more terrifying than anyone at VirtNet Security could have anticipated.
The cyber terrorist Kaine isn’t human. It’s a Tangent, a computer program that has become sentient. And Michael just completed the first step in turning Kaine’s master plan, the Mortality Doctrine, into a reality. The Mortality Doctrine will populate Earth entirely with human bodies harboring Tangent minds. The VNS would like to pretend the world is perfectly safe, but Michael and his friends know that the takeover has already begun. And if they don’t stop Kaine soon, it will be game over for humanity.

“Dashner takes full advantage of the Matrix-esque potential for asking ‘what is real.’” —io9.com

“Set in a world taken over by virtual reality gaming, the series perfectly capture[s] Dashner’s hallmarks for inventiveness, teen dialogue and an ability to add twists and turns like no other author.” —MTV.com

“A brilliant, visceral, gamified mash-up of The Matrix and Inception, guaranteed to thrill even the non-gaming crowd.” —Christian Science Monitor
Read more
Read less
Read Excerpt
+ Add to My Bookshelf
+ Add to Goodreads

The Rule of Thoughts (The Mortality Doctrine, Book Two)

By James Dashner
Michael was not himself.

He lay on the bed of a stranger, staring up at a ceiling he had seen for the first time just the day before. He’d been disoriented and sick to his stomach all night, catching sleep only in fitful, anxious, nightmare-fueled jags. His life had blown apart; his sanity was slipping away. His very surroundings--the foreign room, the alien bed--were unforgiving reminders of his terrifying new life. Fear sparked through his veins.

And his family. What had happened to his family? He wilted a little more every time he pictured them.

The very first traces of dawn--a gloomy, pale light--made the shuttered blinds of the window glow eerily. The Coffin next to the bed sat silent and dark, as foreboding as a casket dug from a grave. He could almost imagine it: the wood rotting and cracked, human remains spilling out. He didn’t know how to look at the objects around him anymore. Real objects. He didn’t even understand the word real. It was as if all his knowledge of the world had been yanked out from under his feet like a rug.

His brain couldn’t grasp it all.

He almost burst out in a laugh, but it died in his chest.

Michael had only had an actual, physical brain for the last twelve hours. Not even a full day, he realized, and that pit in his stomach doubled in size.

Could it really all be true? Really?

Everything he knew was a result of artificial intelligence. Manufactured data and memories. Programmed technology. A created life. He could go on and on, each description somehow worse than the one before it. There was nothing real about him, and yet now here he was, transported through the VirtNet and the Mortality Doctrine program and turned into an actual human being. A living, breathing organism. A life, stolen. So that he could become something he didn’t even understand. His view of the world had been shattered. Utterly.

Especially because he wasn’t sure if he believed it. For all he knew, he could be in another program, another level of Lifeblood Deep. How could he ever again trust what was real and what was not? The uncertainty would drive him mad.

He rolled over and screamed into his pillow. His head--his stolen, unfamiliar head--ached from the thousands of thoughts that pounded through it, each one fighting for attention. Fighting to be processed and understood. And feeling pain here was no different from feeling it as a Tangent. Which only served to confuse him more. He couldn’t accept that before last night he’d just been a program, a long line of code. It didn’t compute. That did make him laugh, and the pain in his head intensified and spread, slicing down his throat and filling his chest.

He yelled again, which didn’t help, then forced himself to swing his legs off the bed and sit up. His feet touched the cool wooden floor, reminding him once again that he was now in a strange land. Lush carpet had blanketed the apartment he’d always known, which seemed homier, warmer, safe. Not cold and hard. He wanted to talk to Helga, his nanny. He wanted his parents.

And those were the thoughts that almost did him in completely. He’d been avoiding them, pressing them back into that pulsing swirl of thousands of other thoughts, but they weren’t going anywhere. They stood out and demanded attention.

If what Kaine had said was true, they were as synthetic as Michael’s programmed fingernails had been. Even his memories. He would never know which ones had been programmed into his artificial intelligence and which ones he’d actually experienced within the code of Lifeblood Deep. He didn’t even know how long he’d existed--his true age. He could be two months old, or three years, or a hundred.

He imagined his parents and Helga as fake, or gone, or dead, maybe never there in the first place. It just didn’t make sense.

The ache that had crept its way into his chest filled his heart, and grief overtook him. He slumped back onto the bed and rolled over, pushing his face into the pillow. For the first time in his existence, Michael cried as an actual human being. But the tears felt no different than they ever had before.