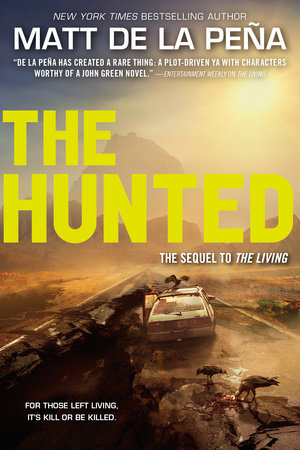 “De la Peña has created a rare thing: a plot-driven YA with characters worthy of a John Green novel.” —Entertainment Weekly on The Living, A-

For those left living, it’s kill or be killed. When Shy pulled himself from the wreckage of the Paradise Cruise luxury liner, he met Addie. Addie was rich and blond, and with no one else to trust, she told Shy a secret she never should have revealed.
It’s a secret that people would kill for—have killed for—and she has the piece that could turn everything on its ear. The problem? Shy has no idea where Addie is. Back home in California seems logical, but there are more ways to die back home than Shy could ever have guessed. And thanks to what Shy knows now, he’s a moving target.

Praise for The Hunted:

“Readers will be drawn to the raw and gritty setting, fast-moving plot, and diverse characters worth rooting for.“—School and Library Journal

"Between [the] fast-paced plot and meaningful, diverse character development, this is a great crossover for fans of both thrillers and more character-driven novels."-Booklist

Praise for The Living:

“De la Peña has created a rare thing: a plot-driven YA with characters worthy of a John Green novel.”-Entertainment Weekly, A-

“[The Living] is special because of its extraordinary protagonist, Shy, who I haven’t been able to shake from my mind in the weeks since I read the book.”-John Green, author of The Fault in Our Stars

"There's no way to classify The Living. It's everything I love mixed into one fantastic, relentless, action-packed story. As always with Matt, the characters are the best part. So real. I loved this book."-James Dashner, #1 New York Times bestselling author of the Maze Runner series

[STAR] "An excellent, enthralling ride...a great read for those looking for adventure and survival stories."-VOYA, Starred

By Matt de la Peña
The four of them stood near the bow in silence as their battered sailboat inched through the Pacific Ocean, toward the ruined California shoreline.

Shy pulled his shirt off his head and stared in awe--they were close enough now that he could make out the devastation caused by the earthquakes. Buildings flattened. Abandoned cars half submerged in parking lots and drifting in the tide. Palm trees snapped in half, and sand caked through the streets. Everything charred black.

Makeshift tents had been erected on the rooftops of the few burned-out structures that still stood, but Shy didn’t see any people. Or any movement. Or any signs of electricity.

The place was a ghost town.

Still, his heart was racing. He thought he might never see land again. But here it was.

According to the staticky report they’d heard on Marcus’s radio when they first left the island, the earthquakes that leveled the West Coast were more massive than any ever recorded. Entire cities had been wiped out. Hundreds of thousands had lost their lives. But worst of all, the earthquakes had caused the deadly Romero Disease to spread like wildfire, infecting nearly a quarter of the population in California and Washington and Oregon. In parts of Mexico.

Shy swallowed, his throat dry and scratchy, and fingered the diamond ring in his pocket, thinking about his mom and sis. His nephew, Miguel. Throughout the month he’d spent on the sailboat, Shy held out hope that his family might still be alive. But now, seeing a portion of the destruction firsthand, the idea of hope seemed stupid. Like living in a little-kid fantasy world.

He turned to Carmen, who was trembling and covering her mouth with her hand. “Hey,” he said, touching her arm. “It’s okay . . . we made it.”

She nodded but didn’t look at him.

He stared at the side of her face, recalling how fine she’d looked back when he met her on the cruise ship. The sun had just starting setting, like now, and his eyes cut right to her beautiful brown legs. The buttons on her white blouse straining to keep it from popping open. But what got him most of all was her face. It was way closer to perfect than some Photoshop shit you’d see in a magazine. He was so shook that first day, he could barely speak. The poor girl had to ask his roommate, Rodney, if he was a deaf-mute.

Now Carmen was weathered-looking and too thin.

Her entire body covered in a thick, salty film.

It was the same for all three of them, the result of spending thirty-six days at sea in a small sailboat--each day marked on the inside of the hull in black dye. They’d baked in the relentless summer sun, then rotated sleepless nights at the helm holding Shoeshine’s compass so they wouldn’t veer off course in the black of night. They’d survived on loaves of stale bread and the few fish they managed to catch. Shoeshine had allowed each of them only a few sips of water in the morning and a few more at night, and all Shy could think about now was bum-rushing somebody’s front lawn and sucking down tap water straight from the hose.

He turned back to the beach. “Please tell me this shit’s not a mirage.”

“I keep rubbing my eyes,” Marcus said. “Make sure my ass isn’t dreaming.”

Shy watched Marcus’s long-lost smile come creeping back onto his face as he tried powering up his portable radio for the two thousandth time since it had stopped working.

Back on the cruise ship, Marcus was a hip-hop dancer. Gave dance demonstrations twice a day and freestyled late night in the club. On the sailboat, though, Shy learned that Marcus ran deeper than the Compton cliche he played in front of rich passengers. He was halfway through an engineering degree at Cal State LA. Wrote video-game code in his free time. A few of the big tech firms were already dangling jobs for after he graduated.

But did those companies still exist?

“Breathe it into your lungs,” Shoeshine told them. “You all just made it back from the dead.” Laughing, he kissed his homemade compass and slipped it into the duffel bag by his feet.

A helicopter was visible in the distance, flying low over the beach. An emergency crew, Shy hoped, his heart suddenly pounding. Maybe they could just hand over the vaccine they’d carried off the island, and the letter, and that would be it.

He was so relieved as their sailboat approached the shoreline that a lump climbed into his throat. He’d imagined this moment for thirty-six straight days. He’d dreamed it every night. Now here they were.

But he was nervous, too. The entire stretch of beach was gutted. They had no idea who was dead or alive, or what they were walking into.

“Where you think we are, anyway?” Marcus asked.

Shy coughed into a closed fist. “Gotta be LA, right?”

The three of them turned to her. First words she’d spoken in three days, even to Shy. She pointed at the shore, to the right of their boat. “See those graffiti walls?” She glanced at Shy. “That’s where Brett asked me to marry him.”

Shy cut his gaze away from Carmen’s and focused on the untouched walls. The mere mention of Carmen’s fiance brought reality crashing back down on his head. Throughout their time on the sailboat, Carmen had been his salvation. He’d battled hunger for her. Dehydration. The crazy-person thoughts that kept creeping into his brain: You should jump right now, culo. Feed your ass to the sharks and be done with it. Why couldn’t you have just died on the ship like everyone else?

But no matter how far Shy slipped into schizo territory, Carmen was always there to reel him back in. And he’d done the same for her.

Now that they’d made it back to California, though, it was time to face facts.

Carmen would be searching for her man.

“It was Venice Beach,” Shoeshine said, steering the sailboat toward a clearing between two flagless poles. He glanced at the distant helicopter. “We don’t know what it is now.”

Shy scanned the stretch of beach again. His old man had taken him to Venice a handful of times during their year together in LA. But he didn’t recognize anything.

“Whatever it is,” Marcus said, “I guarantee it’s better than floating our asses around for a damn month.”

Shoeshine shrugged, his wild gray hair blowing nappy in the wind. His braided chin beard still perfectly intact. “Time will be the judge,” he told them.