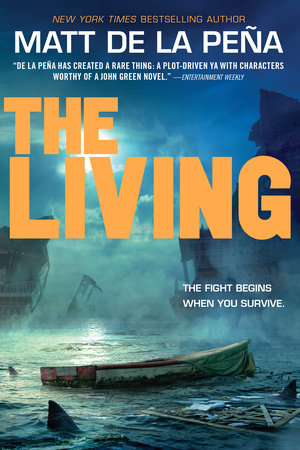 By Matt de la Peña
Newbery Award-winning author Matt de la Peña's The Living is "a rare thing: a plot-driven YA with characters worthy of a John Green novel.” [Entertainment Weekly, A-]

Shy takes the summer job to make some money. A few months on a luxury cruise liner--how bad can it be? Bikinis, free food, maybe even a girl or two . . . every cruise has a fresh crop of passengers, after all. He'll rake in the tips and be able to help his mom and sister out with the bills.
But then, an earthquake more massive than any ever recorded hits California and Shy's life is changed forever.
The earthquake is only the beginning. Twenty-four hours and a catastrophic chain of events later, Shy is lost at sea, fighting to survive--and stuck with her.
She's blond and she's rich, and never in her life would she have dreamed she'd be adrift in the Pacific Ocean, surrounded by death and completely dependent on a guy like Shy.
And Shy hasn't even faced the worst yet.
Look for the thrilling sequel, The Hunted, in bookstores now!

Praise for The Living:

“De la Peña has created a rare thing: a plot-driven YA with characters worthy of a John Green novel.”-Entertainment Weekly, A-

“[The Living] is special because of its extraordinary protagonist, Shy, who I haven’t been able to shake from my mind in the weeks since I read the book.”-John Green, author of The Fault in Our Stars

"There's no way to classify The Living. It's everything I love mixed into one fantastic, relentless, action-packed story. As always with Matt, the characters are the best part. So real. I loved this book."-James Dashner, #1 New York Times bestselling author of the Maze Runner series

[STAR] "An excellent, enthralling ride...a great read for those looking for adventure and survival stories."-VOYA, Starred

By Matt de la Peña
1
Rodney
"Seriously, Shy. Get up."
Shy rolled over on his cot.
"Don't make me smack you upside the head."
Shy cracked open his eyes.
Big Rodney was standing over him, hands on hips.
Shy looked around their small cabin as reality came flooding back: no sleeve in his hands. This, a completely different voyage--bound for Hawaii, not Mexico. The man jumped six days ago, meaning it'd been almost a full week now.
"I know you didn't forget, right?" Rodney said.
"Forget what?" Shy sat up and rubbed his eyes. He knew this answer would stress Rodney out, though--because everything stressed Rodney out--so he smiled and told the guy: "I'm playing, man. Of course I didn't forget. You see I'm already dressed, right?"
"I was gonna say." Rodney ducked into the bathroom, came back out with an electric toothbrush buzzing over his teeth, mumbling something impossible to make out.
Shy got out of bed and went to his dresser, pulled a brown paper bag from behind the safe he never bothered using.
Tonight was Rodney's nineteenth birthday. A bunch of people were supposed to celebrate on the crew deck outside of Southside Lounge. When Shy's shift at the pool ended at nine he'd come down to his and Rodney's cabin to shower and change, but he wound up crashing hard. This was a minor miracle considering he'd hardly slept the night before. Or the night before that. Or the night before . . .
He peeped the clock: already after eleven.
Rodney ducked back into the bathroom to spit, came out wiping his mouth with a hand towel. Guy was surprisingly nimble for an offensive lineman. "I said, you were thrashing around in your sleep, bro. You dreaming about the jumper again?"
"I was dreaming about your mom," Shy told him.
"Oh, I see how it is. We got a second comedian on the ship."
The suicide might have happened six days ago, on a completely different voyage, but every time Shy had closed his eyes since . . . there was the comb-over man. Sipping from his water bottle or talking about corruption or climbing his ass over the railing--guy's meaty arm slowly slipping through Shy's sissy grip.
Even worse, halfway through the dream the man's face would sometimes morph into Shy's grandma's face. Her eyes slowly filling with blood from her freakish disease.
Shy tossed the paper bag to Rodney.
"Bro, you got me a present?" Rodney said. "What is it?"
"What do you want it to be?"
Rodney studied the ceiling and tapped his temple, like he was thinking. Then he pointed at Shy, told him: "How about a beautiful woman in lingerie?"
Shy gave an exaggerated laugh. "What, you think I'm some kind of miracle worker?"
"I'm playing, bro," Rodney said. "She doesn't have to be beautiful. You know I'm not picky."
Shy pointed at the bag. "Just open it."
Rodney unfolded the top and pulled out the book Shy got him: Daisy Cooks! Latin Flavors That Will Rock Your World.
"They had it in the gift shop," Shy told him.
Rodney flipped it over to look at the back.
"If you're gonna be a famous chef," Shy added, "you need to know how to do tamales and empanadas. Me and Carmen could be like your test audience."
Rodney looked up at Shy with glassy eyes.
The gift proved Shy remembered their first conversation on their first voyage together. When Rodney mentioned his dream of becoming a New York City chef.
But tears?
Really?
"Come on over here, bro," Rodney said, holding out his arms.
"Nah, I'm good," Shy told him, moving toward the door. Rodney was an enthusiastic hugger who didn't understand his own strength. And Shy wasn't the touchy-feely type.
"I mean it, Shy. Come give your boy some love."
Shy went for the door handle instead, saying: "We need to hurry and get you to your party--"
Too late.
Rodney grabbed him by the arm and reeled him in for a bear hug. Shy imagined this was what it might feel like to be squeezed to death by a Burmese python.
"You're a good friend," Rodney said, his voice cracking with emotion. "I mean it, Shy. When I become a world-famous chef and they put me on one of those morning TV shows to do a demonstration . . . Watch, I'm gonna name a dish after my Mexican compadre. How about the Shy Soufflé?"
Shy would've come up with some crack about Rodney having more of a face for radio, but he couldn't think straight. Rodney was cutting off all the oxygen to his brain.