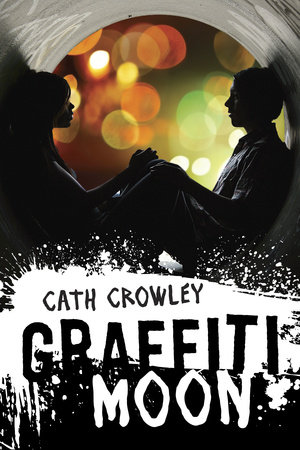 By Cath Crowley
Senior year is over, and Lucy has the perfect way to celebrate: tonight, she's going to find Shadow, the mysterious graffiti artist whose work appears all over the city. He's out there somewhere—spraying color, spraying birds and blue sky on the night—and Lucy knows a guy who paints like Shadow is someone she could fall for. Really fall for. Instead, Lucy's stuck at a party with Ed, the guy she's managed to avoid since the most awkward date of her life. But when Ed tells her he knows where to find Shadow, they're suddenly on an all-night search around the city. And what Lucy can't see is the one thing that's right before her eyes.
Read more
Read less
Read Excerpt
+ Add to My Bookshelf
+ Add to Goodreads

Just arrived at the studio. Your graffiti guys Shadow and Poet are here, Al texted, and I took off across the night. Took off under a sky bleeding out and turning black. Left Dad sitting outside his shed yelling, “I thought you weren’t meeting Jazz till later. Where’s the fire, Lucy Dervish?”

In me. Under my skin.

Let me make it in time. Let me meet Shadow. Poet too but mainly Shadow. The guy who paints in the dark. Paints birds trapped on brick walls and people lost in ghost forests. Paints guys with grass growing from their hearts and girls with buzzing lawn mowers. An artist who paints things like that is someone I could fall for. Really fall for.

I’m so close to meeting him, and I want it so bad. Mum says when wanting collides with getting, that’s the moment of truth. I want to collide. I want to run right into Shadow and let the force spill our thoughts so we can pick each other up and pass each other back like piles of shiny stones.

At the top of Singer Street I see the city, neon blue and rising. There’s lightning deep in the sky, working its way through the heat to the surface. There’s laughter somewhere far away. There’s one of Shadow’s pieces, a painting on a crumbling wall of a heart cracked by earthquake with the words Beyond the Richter scale written underneath. It’s not a heart like you see on a Valentine’s Day card. It’s the heart how it really is: fine veins and atriums and arteries. A fist-­size forest in our chest.

I turn a corner and fly down Al’s street. Toward his studio, toward him sitting on the steps, little moths above him, playing in the light. Toward a shadow in the distance. A shadow of Shadow. There’s collision up ahead.

Al drains his coffee and puts the cup on the step beside him. “Like a girl who missed them by about five minutes.”

It’s a sweating hot night for October. More people are out than usual, so I spray the sky fast. Eyes ahead and behind. Looking for cops. Looking for anyone I don’t want to be here. Paint sails and the things that kick in my head scream from can to brick. See this, see this, see this. See me emptied onto a wall.

Tonight I’m doing this bird that’s been in my head all day. He’s a little yellow guy lying on sweet green grass. Belly to clouds, legs facing the same direction. He could be sleeping. He could be dead. The yellow’s right. The green too. The sky’s all wrong. I need the sort of blue that rips your inside out. You don’t see blue like that round here.

Bert was always trying to find it for me. Every week or so at the paint store he’d show me a blue he’d special-­ordered. “Close, boss,” I’d say. “But not close enough.”

He still hadn’t found it when he died two months ago. He got all the other colors I wanted. The green this bird’s lying on is a shade he found over two years back, after I quit school and went to work for him. I made it to the end of June in year ten, and then I couldn’t make it any longer.

“You had a good first day,” Bert told me when he handed the green over. “Real good.”

“This is very fucking nice,” I said, spraying some on a card and taking it as a sign that leaving school was the right thing to do. That Mum was wrong about wanting me to stay on.

“It is very fucking nice.” Bert looked over his shoulder. “But don’t say ‘fuck’ when my wife Valerie’s around.” Bert always swore like a kid scared of getting caught. I laughed about it till Val heard me swearing. Bert had the last chuckle that day.

“What’s so funny?” a voice behind me asks.

“I’ve been calling your name since the top of the hill. And the council made this place legal, remember?” He finishes the last bit of his sausage roll. “I like the rush of working where we might get caught.”

“I like the rush of painting,” I tell him.

He watches me for a bit. “So I called your mobile earlier. It’s disconnected.”

Leo looks at my picture of a wide sky hanging over that yellow bird. He points at the kid on the wall. “Nice touch.”

While he thinks a bit longer, I look around. The old guy who works at the glass studio across the road is on the steps, texting and staring at us. At least I know he’s not calling the cops.

Leo always makes his writing suit the piece. Sometimes he uses fonts he finds online. Sometimes he makes up his own and names them. Tonight he smokes the word Peace across the clouds, letters drifting and curling. It’s funny how two guys can look at the same thing and see it differently. I don’t see peace when I look at that bird. I see my future. I hope it’s only sleeping.

His hand moves across the wall, signing our names. He always writes them the same way. His then mine in a font he calls Phantasm.

We leave the old guy on the steps with his coffee and head up Vine Street. It’s a fifteen-­minute walk to my place if you take the main roads, but Leo and me never do. We take the side streets and alleys.

I live on the other side of the train yard, so we jump the fence and cut through, looking out for people working as we walk. I like seeing their thoughts hit the carriages. Makes the city as much ours as someone else’s.

“So I saw Beth today,” Leo says. “She asked me how you were doing.” He throws stones at the dead trains. “It sounded like she wants you back.”

I stop and take out a can and spray a greeting-­card heart with a gun pointed at it. “We’ve been over almost three months.” Since August first, not that I’m counting.

“You mind if I spray a piece on the side of your gran’s house?”

He chuckles. “Yeah, right. You’re over.”

“I like her, just not anything more than that. She used to do this thing where she’d lean over and kiss me and then take a break to whisper hilarious stuff in my ear and then kiss me again. I’d be screaming, What’s wrong with you? Fall in love with her, you dick.”

“She didn’t think that was weird?”

“Inside. I was screaming on the inside. Anyway, I never fell in love with her so I guess the part of the brain that controls love doesn’t respond to being called a dick.”

“For your sake, I’m hoping no part of your brain responds to being called a dick.”

“Fair point.” I wish I hadn’t thought about Beth doing that thing because now I can feel her at my ear, warm breath and sweet tickling and her voice sounding like that blue I’ve been searching for.

“I was hard-­core obsessed,” he says without thinking about it. “Not in love.”