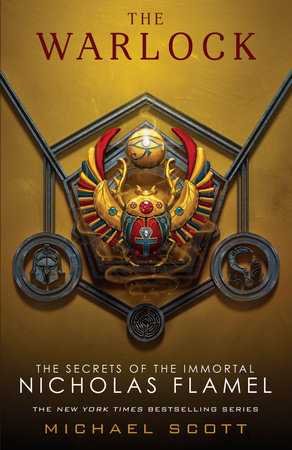 By Michael Scott
Nicholas Flamel appeared in J.K. Rowling’s Harry Potter—but did you know he really lived? And his secrets aren't safe! Discover the truth in book five of Michael Scott’s New York Times bestselling series the Secrets of the Immortal Nicholas Flamel.

The Oaths: Many have made them.

The Betrayals: Almost as many will undo them.

The twins of prophecy have been divided--the end has begun.
Josh Newman has chosen a side, and he will not stand with his sister, Sophie, or the Alchemyst, Nicholas Flamel. He will fight alongside Dee and the mysterious Virginia Dare.
With San Francisco on the bring of ruin at the hands of Machiavelli, and Billy the Kid, Scatty, and Joan of Arc in another dimension called the Shadowrealm, the world stands at the edge of destruction. It is up to Sophie alone to find her twin before the battle begins pr all is lost—forever.

By Michael Scott
The anpu appeared first, tall jackal-headed warriors with solid red eyes and saber-teeth, wearing highly polished black glass armor. They poured out of a smoking cave mouth and spread around Xibalba, some taking up positions in front of each of the nine gates that opened into the enormous cave, others sweeping through the primitive Shadowrealm, ensuring that it was empty. As always, they moved in complete silence; they were mute until the final moments before they charged into battle, and then their screams were terrifying.

Only when the anpu were satisfied that Xibalba was deserted did the couple appear.

Like the anpu, they were wearing glass and ceramic armor, though theirs was ornate rather than practical, and in a style that had last been seen in the Old Kingdom of ancient Egypt.

Minutes earlier, the couple had left an almost perfect facsimile of Danu Talis to travel across a dozen linked Shadowrealms, some remarkably similar to earth, some completely alien. And although the couple were both by nature intensely curious about the myriad worlds they ruled, they did not linger. They raced through a complex network of leygates that would lead them to the place known as the Crossroads.

There was so little time left.

Nine gates opened out into Xibalba, each one little more than a roughly carved opening in the black rock wall. Avoiding the bubbling pits of lava that spat sticky strings of molten rock across their path, the couple traversed the width of the Shadowrealm from the ninth gate to the third, the Gate of Tears. Even the anpu, which were by nature fearless, refused to approach this cave. Ancient memories rooted deep in their DNA warned them that this was the place where their race had almost been exterminated after they'd fled the world of the humani.

As the couple neared the circular cave mouth, the crude and blocky glyphs carved over the opening began to glow with a faint white light. It reflected off their mirrored armor, illuminating the interior of the cave, painting the couple in stark black and white and, in that instant--briefly--they were beautiful.

Without a backward glance, the couple stepped into the dark cave mouth . . .

. . . and less than a heartbeat later, a couple dressed identically in white jeans and T-shirts winked into existence on the circular stone known as Point Zero before Notre Dame Cathedral in Paris, France. The man took the woman's hand in his and together they set off at a brisk pace, picking their way through the debris of stones and broken statues that still littered the square where Sophie and Josh Newman had used Elemental Magic to defeat the cathedral's animated stone gargoyles.

And because this was Paris, no one looked twice at a couple wearing sunglasses at night.