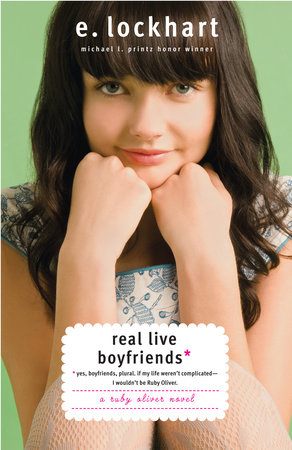 By E. Lockhart On Tour

From E. Lockhart, author of the highly acclaimed, New York Times bestseller We Were Liars, which John Green called "utterly unforgettable," comes Real Live Boyfriends, the fourth book in the uproarious and heartwarming Ruby Oliver novels that finds Ruby Oliver as neurotic and hyperverbal as ever as she interviews her friends for a documentary on love and popularity and while doing so turns up some uncomfortable truths.

She’s lost most of her friends. She’s lost her true love more than once. She’s lost her grandmother, her job, her reputation, and possibly her mind. But she’s never lost her sense of humor. The Ruby Oliver books are the record of her survival.

A real live boyfriend does not contribute to your angst.

You do not wonder if he will call.

You do not wonder whether he will kiss you.

And he does not look at his phone while you are talking, to see if anyone has texted him.

Of course he calls. He's your boyfriend!

Of course there will be kissing. He's your boyfriend!

And of course he listens. He's your real live boyfriend!

You can sit down next to him at lunch whenever you want. There's no need for mental gyrations such as: Will he want me there when he's hanging with his friends? Or will he half ignore me in order to seem golden in front of them?

Of course you can sit with him. He's your boyfriend!   You can assume you'll see him on the weekend. You can call him just to chat. You can expect he'll be nice to your friends.

Contrary to some rumors, however, you don't have to be in love. You don't have to engage in any horizontal action beyond what you're in the mood for. You don't even need to stay together after high school. But you have to like him and he has to like you--and everyone has to know you're together.   He's your real live boyfriend!

From seventh grade to ninth, I had a real live boyfriend named Tommy Hazard.

Tommy was perfect. He had clear skin, he was never obnoxious in class, and he was excellent at sports. He had beautiful strong shoulders and a secret mysterious smile. Tall but not too tall. Great teeth. Smoldering eyes.

In fact, he was superhot and could have any girl he wanted. And the best thing was--he went weak whenever he saw me.

He was also imaginary.

I told my best friend, Kim, all about him. He changed according to my mood. Sometimes he was a surfer boy in board shorts and a bead choker, tossing the water out of his hair as he smiled down at me. Sometimes he was a skate punk. Other times a mod guy in a narrow tie who took beautiful black-and-white photographs.

Then I started going out with Jackson Clarke, sophomore year, and Tommy Hazard disappeared--I guess because I finally had a real live boyfriend with a real live heart pumping in his chest.

Only--then it turned out he didn't.

And he didn't want to be my real live boyfriend anymore--

He wanted to be Kim's.

Flash to end of junior year.

When I wrote the above definition of a real live boyfriend, it was fourteen months since Kim and Jackson got together and shattered my heart, plunging me into an abyss of bad mental health. I wrote it sitting in the B&O Espresso, where Meghan and I were supposed to be studying for finals. We were hopped up on dobosh torte and coffee drinks, and I couldn't think any more about chemistry formulas.

I flipped to a new page in my notebook and wrote something else, just to give myself a break.

Meghan crinkled her sexy little freckled nose when she read it. "What do you mean, real live boyfriend?"

"Exactly what I wrote."

"Isn't this just what a boyfriend is?" she asked. "Any boyfriend?"

Just to be clear, Meghan has had a pretty much continuous cycle of serious boyfriends since seventh grade. Me, I had been in the state of Noboyfriend since April of sophomore year, when the Kim/Jackson debacle made me pretty much dysfunctional.

And while you could argue that Meghan's male-oriented outlook on life was all about the fact that her dad died when she was twelve and that's why she's the only other teenager I know who sees a shrink on a regular basis, there was no denying that she was being truthful when she said she didn't know what I was writing about. She and her boyfriend, Finn, who was making espresso behind the counter at the B&O right that very minute, got together just before Spring Fling junior year and were as real and live as real and live could be. And before Finn, Meghan had been real and live with Bick.

And before Bick, with a guy she met at camp.

And before that, with Chet, who moved away.

And before that--you get the idea.

Meghan didn't know much about how it felt to wonder if a guy still liked you. She didn't know about half-boyfriends and awkwardness and partial breakups and all that human weirdness--partly, yes, because she is one of the most oblivious people I've ever met and really might not know human weirdness if it bit her, but also because she somehow knows how to connect with boys. Not like they're Neanderthals or wildebeests or aliens or pod-robots, but like they're normal human beings.

Which obviously they are.

Only, it is extremely hard to tell sometimes.