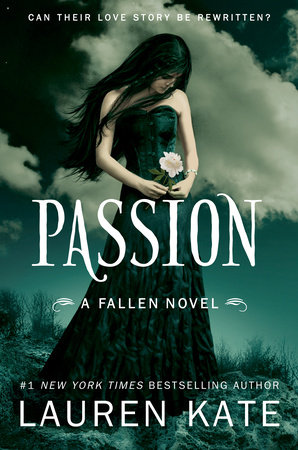 Sweeping across centuries, PASSION is the third novel in the unforgettably epic and worldwide bestselling FALLEN series.

Luce would die for Daniel.

And she has. Over and over again. Throughout time, Luce and Daniel have found each other, only to be painfully torn apart: Luce dead, Daniel left broken and alone. But perhaps it doesn’t need to be that way. . . .

Luce is certain that something—or someone—in a past life can help her in her present one. So she begins the most important journey of this lifetime . . . going back eternities to witness firsthand her romances with Daniel . . . and finally unlock the key to making their love last.

Cam and the legions of angels and Outcasts are desperate to catch Luce, but none are as frantic as Daniel. He chases Luce through their shared pasts, terrified of what might happen if she rewrites history.

Because their romance for the ages could go up in flames . . . forever.

The voices reached her in the murky darkness.

She ignored them, pressing further. Echoes of her name bounced off the shadowy walls of the Announ cer, sending licks of heat rippling across her skin. Was that Daniel’s voice or Cam’s? Arriane’s or Gabbe’s? Was it Roland pleading that she come back now, or was that Miles?

The calls grew harder to discern, until Luce couldn’t tell them apart at all: good or evil. Enemy or friend. They should have been easier to separate, but nothing was easy anymore. Everything that had once been black and white now blended into gray.

Of course, both sides agreed on one thing: Everyone wanted to pull her out of the Announcer. For her protec­tion, they would claim.

Not after they’d wrecked her parents’ backyard, made it into another one of their dusty battlefields. She couldn’t think about her parents’ faces without wanting to turn back—not like she’d even know how to turn back inside an Announcer, anyway. Besides, it was too late. Cam had tried to kill her. Or what he thought was her. And Miles had saved her, but even that wasn’t sim­ple. He’d only been able to throw her reflection because he cared about her too much.

And Daniel? Did he care enough? She couldn’t tell.

In the end, when the Outcast had approached her, Daniel and the others had stared at Luce like she was the one who owed them something.

You are our entrance into Heaven, the Outcast had told her. The price. What had that meant? Until a couple of weeks ago she hadn’t even known the Outcasts existed. And yet, they wanted something from her—badly enough to battle Daniel for it. It must have had to do with the curse, the one that kept Luce reincarnated lifetime after lifetime. But what did they think Luce could do?

Was the answer buried somewhere here?

Her stomach lurched as she tumbled senselessly through the cold shadow, deep inside the chasm of the dark Announcer.

The voices began to fade and grow dimmer. Soon they were barely whispers. Almost like they had given up. Until—

They started to grow louder again. Louder and clearer.

No. She clamped her eyes shut to try to block them out.

She was cold and she was tired and she didn’t want to hear them. For once, she wanted to be left alone.

Her feet hit something with a thwump.

She was standing on solid ground. She knew she wasn’t tumbling anymore, though she couldn’t see anything in front of her except for the blanket of blackness. Then she looked down at her Converse sneakers.

They were planted in a blanket of snow that reached midway up her calves. The dank coolness that she was used to—the shadowy tunnel she’d been traveling through, out of her backyard, into the past—was giving way to something else. Something blustery and ab­solutely frigid.

The first time Luce had stepped through an Announcer—from her Shoreline dorm room to Las Vegas—she’d been with her friends Shelby and Miles. At the end of the passage they’d met a barrier: a dark, shad­owy curtain between them and the city. Because Miles was the only one who’d read the texts on stepping through, he’d started swiping the Announcer with a cir­cular motion until the murky black shadow flaked away. Luce hadn’t known until now that he’d been troubleshooting.

This time, there was no barrier. Maybe because she was traveling alone, through an Announcer summoned of her own fierce will. But the way out was so easy. Al­most too easy. The veil of blackness simply parted.

A blast of cold tore into her, making her knees lock with the chill. Her ribs stiffened and

her eyes teared in the sharp, sudden wind.

Luce already regretted her panicked jump through time. Yes, she needed an escape, and yes, she wanted to trace her past, to save her former selves from all the pain, to understand what kind of love she’d had with Daniel all those other times. To feel it instead of being told about it. To understand—and then fix—whatever curse had been inflicted on Daniel and her.

But not like this. Frozen, alone, and completely un­prepared for wherever, whenever she was.

She could see a snowy street in front of her, a steel-gray sky above white buildings. She could hear some­thing rumbling in the distance. But she didn’t want to think about what any of it meant.

“Wait,” she whispered to the Announcer.

The shadow drifted hazily a foot or so beyond her fingertips. She tried to grasp it, but the Announcer eluded her, flicking farther away. She leaped for it, and caught a tiny damp piece of it between her fingers—

But then, in an instant, the Announcer shattered into soft black fragments on the snow.
They faded, then were gone.

In the distance, the narrow road curved left to meet a shadowy intersection. The sidewalks were piled high with shoveled snow, which had been packed against two long banks of white stone buildings. They were striking, unlike anything Luce had ever seen, a few stories tall, with their entire façades carved into rows of bright white arches and elaborate columns.

All the windows were dark. Luce got the sense that the whole city might be dark. The only light came from a single gas streetlamp. If there was any moon, it was hidden by a thick blanket of cloud. Again something rumbled in the sky. Thunder?

Luce hugged her arms around her chest. She was freezing.

A woman’s voice. Hoarse and raspy, like someone who’d spent her whole life barking orders. But the voice was trembling, too.

“Luschka, you idiot. Where are you?”

She sounded closer now. Was she talking to Luce? There was something else about that voice, something strange that Luce couldn’t quite put into words.

When a figure came hobbling around the snowy street corner, Luce stared at the
woman, trying to place her. She was very short and a little hunched over, maybe in her late sixties. Her bulky clothes seemed too big for her body. Her hair was tucked under a thick black scarf. When she saw Luce, her face scrunched into a compli­cated grimace.

“Where have you been?”

Luce looked around. She was the only other person on the street. The old woman was speaking to her.

“Right here,” she heard herself say.

She clapped a hand over her mouth. So that was what had seemed so bizarre about the old woman’s voice: She was speaking a language Luce had never learned. And yet, not only did Luce understand every word, but she could speak it back.

“I could kill you,” the woman said, breathing heavily as she rushed toward Luce and threw her arms around her.

For such a frail-looking woman, her embrace was strong. The warmth of another body pressing into Luce after so much intense cold made her almost want to cry. She hugged back hard.

“Grandma?” she whispered, her lips close to the woman’s ear, somehow knowing that was who the woman was.

“Of all the nights I get off work to find you gone,” the woman said. “Now you’re skipping around in the middle of the street like a lunatic? Did you even go to work today? Where is your sister?”

There was the rumbling in the sky again. It sounded like a bad storm moving closer. Moving fast. Luce shiv­ered and shook her head. She didn’t know.

“Aha,” the woman said. “Not so carefree now.” She squinted at Luce, then pushed her away to get a closer look. “My God, what are you wearing?”

Luce fidgeted as her past life’s grandmother gaped at her jeans and ran her knobby fingers over the buttons of Luce’s flannel shirt. She grabbed Luce’s short, tangled ponytail. “Sometimes I think you are as crazy as your fa­ther, may he rest in peace.”

“I just—” Luce’s teeth were chattering. “I didn’t know it was going to be so cold.”

The woman spat on the snow to show her disap­proval. She peeled off her overcoat. “Take this before you catch your death.” She bundled the coat roughly around Luce, whose fingers were half frozen as she struggled to button it. Then her grandmother untied the scarf from her neck and wrapped it around Luce’s head.

A great boom in the sky startled both of them. Now Luce knew it wasn’t thunder. “What is that?” she whis­pered.

The old woman stared at her. “The war,” she mut­tered. “Did you lose your wits along with your clothes? Come now. We must go.”

As they waded down the snowy street, over the rough cobbles and the tram tracks set into them, Luce realized that the city wasn’t empty after all. Few cars were parked along the road, but occasionally, down the darkened side streets, she heard the whinnies of carriage horses waiting for orders, their frosty breaths clotting the air. Silhouetted bodies scampered across rooftops. Down an alley, a man in a torn overcoat helped three small children through the hatched doors of a basement.

At the end of the narrow street, the road opened onto a broad, tree-lined avenue with a wide view of the city. The only cars parked here were military vehicles. They looked old-fashioned, almost absurd, like relics in a war museum: soft-top jeeps with giant fenders, bone-thin steering wheels, and the Soviet hammer and sickle painted onto the doors. But aside from Luce and her grandmother, there were no people on this street. Everything—except for the awful rumbling in the sky—was ghostly, eerily quiet.

In the distance, she could see a river, and far across it, a great building. Even in the darkness, she could make out its elaborate tiered spires and ornate onion-shaped domes, which seemed familiar and mythic at the same time. It took a moment to sink in—and then fear shot through Luce.

She was in Moscow.