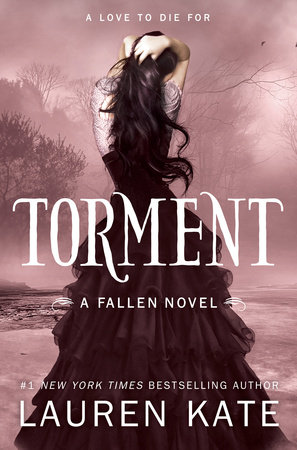 By Lauren Kate
The second novel in the addictive and worldwide bestselling FALLEN series . . . where love never dies.

That’s what it’s like for Luce to be apart from her fallen angel boyfriend, Daniel. It took them an eternity to find one another, but now he has told her he must go away. Just long enough to hunt down the Outcasts—immortals who want to kill Luce. Daniel hides Luce at Shoreline, a school on the rocky California coast with unusually gifted students: Nephilim, the offspring of fallen angels and humans.

At Shoreline, Luce learns what the Shadows are, and how she can use them as windows to her previous lives. Yet the more Luce learns, the more she suspects that Daniel hasn’t told her everything. He’s hiding something—something dangerous. What if Daniel’s version of the past isn’t actually true? What if Luce is really meant to be with someone else?

By Lauren Kate
ONE

Luce planned on keeping her eyes closed all six hours of the cross-country flight from Georgia out to California, right up until the moment when the wheels of the plane touched down in San Francisco. Half asleep, she found it so much easier to pretend she was already reunited with Daniel.

It felt like a lifetime since she'd seen him, though it had really only been a few days. Ever since they'd said goodbye at Sword & Cross on Friday morning, Luce's whole body had felt groggy. The absence of his voice, his warmth, the touch of his wings: it had sunk into her bones, like a strange illness.

An arm brushed against hers, and Luce opened her eyes. She was face to face with a wide-eyed, brown-haired guy a few years older than her.

"Sorry," they both said at the same time, each retreating a few inches on either side of the plane's armrest.

Out the window, the view was startling. The plane was making its descent into San Francisco, and Luce had never seen anything like it before. As they traced the south side of the bay, a winding blue tributary seemed to cut through the earth on its way to the sea. The stream divided a vibrant green field on one side from a swirl of something bright red and white on the other. She pressed her forehead to the double plastic pane and tried to get a better view.

"What is that?" she wondered aloud.

"Salt," the guy answered, pointing. He leaned in closer. "They mine it out of the Pacific."

The answer was so simple, so . . . human. Almost a surprise after the time she'd spent with Daniel and the other--she was still unpracticed at using the terms literally--angels and demons. She looked out across the midnight-blue water, which seemed to stretch forever west. Sun-over-water had always meant morning to Atlantic coast-raised Luce. But out here, it was almost night.

"You're not from around here, are you?" her seatmate asked.

Luce shook her head but held her tongue. She kept staring out the window. Before she'd left Georgia this morning, Mr. Cole had coached her about keeping a low profile. The other teachers had been told that Luce's parents had requested a transfer. It was a lie. As far as Luce's parents, Callie, and anyone else knew, she was still enrolled at Sword & Cross.

A few weeks before, this would have infuriated her. But the things that had happened in those final days at Sword & Cross had left Luce a person who took the world more seriously. She had glimpsed a snapshot of another life--one of so many she'd shared with Daniel before. She'd discovered a love more important to her than anything she'd ever thought possible. And then she'd seen all of that threatened by a crazy, dagger-wielding old woman whom she'd thought she could trust.

There were more out there like Miss Sophia, that Luce knew. But no one had told her how to recognize them. Miss Sophia had seemed normal, up until the end. Could the others look as innocent as . . . this brown-haired guy sitting next to her? Luce swallowed, folded her hands on her lap, and tried to think about Daniel.

Daniel was taking her someplace safe.

Luce pictured him waiting for her in one of those gray plastic airport chairs, elbows on knees, his blond head tucked between his shoulders. Rocking back and forth in his black Converse sneakers. Standing up every few minutes to pace around the baggage carousel.

There was a jolt as the plane touched down. Suddenly she was nervous. Would he be as happy to see her as she was to see him?

She focused on the brown and beige pattern on the cloth seat in front of her. Her neck felt stiff from the long flight and her clothes had a stale, stuffy airline smell. The navy-blue-suited ground crew outside the window seemed to be taking an abnormally long time to direct the plane to its Jetway. Her knees bobbed with impatience.

"I take it you're staying in California for a while?" The guy next to her offered a lazy smile that only made Luce more anxious to get up.

"Why would you say that?" she asked quickly. "What would make you think that?"

He blinked. "With that huge red duffel bag and all."

Luce inched away from him. She hadn't even noticed this guy until two minutes ago when he'd jarred her awake. How did he know about her luggage?

"Hey, nothing creepy." He shot her a strange look. "I was just standing behind you in line when you checked in."

Luce smiled awkwardly. "I have a boyfriend" streamed from her mouth. Instantly, her cheeks reddened.

Luce grimaced. She didn't know why she'd said that. She didn't want to be rude, but the seat belt light went off and all she wanted to do was barrel past this guy and right off the plane. He must have had the same idea, because he edged backward in the aisle and swept his hand forward. As politely as she could, Luce pushed past and bounded toward the exit.

Only to get caught in a bottleneck of agonizing slowness on the Jetway. Silently cursing all the casual Californians shuffling in front of her, Luce stood on her toes and shifted from foot to foot. By the time she stepped into the terminal, she'd driven herself half insane with impatience.

Finally, she could move. She wove expertly through the crowd and forgot all about the guy she'd just met on the plane. She forgot to feel nervous that she'd never been to California in her life--never been further west than Branson, Missouri, that time when her parents dragged her to see Yakov Smirnoff doing standup. And for the first time in days, she even briefly forgot the horrible things she'd seen at Sword & Cross. She was headed toward the only thing in the world that had the power to make her feel better. The only thing that could make her feel that all the anguish she'd been through--all the shadows, that unreal battle in the cemetery, and worst of all, the heartbreak of Penn's death--might be worth surviving.