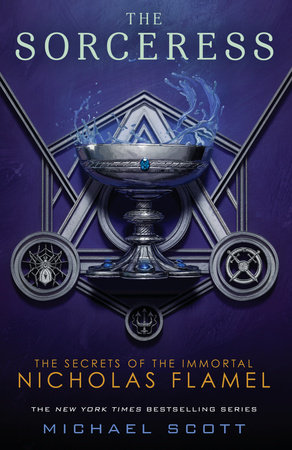 By Michael Scott
Nicholas Flamel appeared in J.K. Rowling’s Harry Potter—but did you know he really lived? And his secrets aren't safe! Discover the truth in book three of the New York Times bestselling series the Secrets of the Immortal Nicholas Flamel.

The Problem: Perenelle Flamel is trapped.

What’s Worse: Sophie and Josh might soon be as well.

Paris was destroyed by John Dee and Niccolo Machiavelli, but the missing pages of the Book of Abraham the Mage are still protected from Dee and the Dark Elders.    Except Perenelle is imprisoned on Alcatraz and now Scatty is missing, leaving a weakening Nicholas as Sophie and Josh's only protection in Lond, a city Dee has under his control.
The only hope of defeating Dee and escaping London is to find an Elder to teach the twins the third elemental magic—Water Magic. The bad news? The lone option is Gilgamesh the King, and he is absolutely insane.

"The Secrets of the Immortal Nicholas Flamel has everything you loved about Harry Potter, including magic, mystery, and a constant battle of good versus evil."--Bustle

By Michael Scott
“I think I see them.”

The young man in the green parka standing directly beneath the huge circular clock in St. Pancras station took the phone away from his ear and checked a blurred image on the screen. The English Magician had sent the image: the picture was grainy, the colors washed and faded, and it looked liked it had been taken from an overhead security camera. It showed an older man with short gray hair, accompanied by two blond-haired teens, climbing onto a train.

Rising up on his toes, the young man swiveled his head, looking for the trio he’d glimpsed. For a moment, he thought he’d lost them in the milling crowd, but even if he had, they wouldn’t get far: one of his sisters was downstairs; another was in the street outside, watching the entrance.

Now, where had the old man and the teenagers gone?

Narrow, pinched nostrils opened wide as the young man sorted through the countless scents in the station. He identified and dismissed the mixed stink of too many humani, the myriad perfumes and deodorants, the gels and pastes, the greasy odor of fried food from the station’s restaurants, the richer aroma of coffee and the metallic oily tang of the train engines and carriages. He closed his eyes and tilted his head back.

The odors he was seeking were older, wilder, unnatural. . . .

Mint: just the merest suggestion.
Orange: no more than the vaguest hint.
Vanilla: little more than a trace.

Hidden behind small rectangular sunglasses, blue-black eyes opened wide and his head swiveled, following the gossamer threads of scent through the vast train station. He had them now!

The gray-haired older man, wearing black jeans and a scuffed leather jacket, was striding down the station concourse directly toward him. There was a small overnight case in his left hand. He was followed by the two teenagers, alike enough to be brother and sister. The boy was taller than the girl, and they were both wearing backpacks.

The young man snapped a quick picture with his cell phone camera and sent it to Dr. John Dee. Although he had nothing but contempt for the English Magician, there was no point in making an enemy of him. Dee was the agent of the most dangerous of all the Elders.

Pulling the hood of his parka over his head, he turned away as the trio drew level with him, and dialed his sister, who was waiting downstairs. “It’s definitely Flamel and the twins,” he murmured into the phone, speaking the ancient language that had eventually become Gaelic. “They’re heading in your direction. We’ll take them when they get onto the Euston Road.”

The young man in the hooded parka set off after the Alchemyst and the American twins. He moved easily through the early-afternoon crowd, looking like just another teenager, anonymous and unnoticed in his sloppy jeans, scuffed sneakers and overlarge coat, his head and face concealed by the hood, his eyes invisible behind the sunglasses.

Despite his form, the young man had never been remotely human. He and his sisters had first come to this land when it was still joined to the European continent, and for generations they had been worshipped as gods. He bitterly resented being ordered about by Dee–who was, after all, nothing more than a humani. But the English Magician had promised the hooded boy a delectable prize: Nicholas Flamel, the legendary Alchemyst. Dee’s instructions were clear; he and his sisters could have Flamel, but the twins must not be touched. The boy’s thin lips twisted. His sisters would take the boy and girl, while he would have the honor of killing Flamel. A coal-black tongue licked cracked dry lips. He and his sisters would feast for weeks. And, of course, they would keep the tastiest morsels for Mother.


Nicholas Flamel slowed, allowing Sophie and Josh to catch up with him. Forcing a smile, he pointed to the thirtyfoot- tall bronze statue of a couple embracing beneath the clock. “It’s called The Meeting Place,” he said loudly, and then added in a whisper, “We’re being followed.” Flamel grasped Josh’s arm with iron-hard fingers. “Don’t even think about turning around.”

“What?” Josh said tightly. He was feeling nauseated; his newly Awakened senses were overwhelmed by the scents and sounds of the train station. The light was so sharp he wished he had a pair of sunglasses to shield his eyes.

“ ‘What?’ is the better question,” Nicholas said grimly. He raised a finger to point up to the clock, as if he were talking about it. “I’m not sure what it is,” he admitted. “Something ancient. I felt it the moment we stepped off the train.”

“A tingle, like an itch. My aura reacted to the aura of whoever–whatever–is here. When you have a little more control of your own auras, you’ll be able to do the same.” Tilting her head back, as if she were admiring the latticework of the metal-and-glass ceiling, Sophie slowly turned.

Crowds swirled around them. Most seemed to be locals, though there were plenty of tourists, many stopping to have their photographs taken in front of The Meeting Place or the huge clock. No one seemed to be paying them any particular attention.

“No,” Flamel snapped. “You can only use your powers as an absolute last resort. As soon as you activate your aura, it will alert every Elder, Next Generation and immortal within a ten-mile radius, and here, just about every immortal you encounter is allied to the Dark Elders. Also, in this land, it could awaken others, creatures best left sleeping.”

“But you said we’re being followed,” Sophie protested.

Flamel urged the twins to the left, away from the statue, hurrying them toward the exit. “I would imagine there are watchers in every airport, seaport and railway station across Europe. Although Dee might have suspected that we were heading to London, the instant either of you activates your aura, he’ll know for certain.”