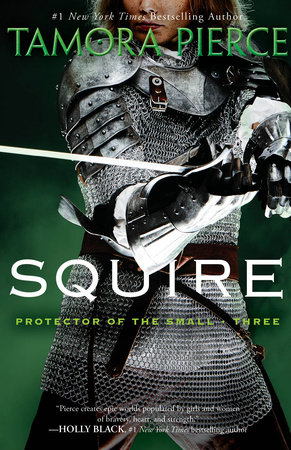 By Tamora Pierce
The third book in the New York Times bestselling series from the fantasy author who is a legend herself: TAMORA PIERCE.

The path to knighthood is full of surprises. . . .

Keladry of Mindelan dreams of becoming squire to the famous female knight Alanna the Lioness, but she worries that she will not be selected by her hero—perhaps not by any knight master. When Kel is picked instead by the legendary Lord Raoul, the unexpected honor shocks her enemies across the realm. Kel must quickly prove herself up to the task, mastering her fighting and leadership skills while discovering what it takes to be part of the royal guard. A new romance is blossoming as well, bringing with it the rush of first love and the unexpected challenges of balancing knight work and a relationship. All the while, Kel prepares for her biggest fear: the infamous “Ordeal,” the last challenge that stands between her and knighthood.

More timely than ever, the Protector of the Small series is Anti-Bullying 101 while also touching on issues of bravery, friendship, and dealing humanely with refugees against a backdrop of an action-packed fantasy adventure.

By Tamora Pierce
Despite the overflow of humanity present for the congress at the royal palace, the hall where Keladry of Mimdelan walked was deserted. There were no servants to be seen. No echo of the footsteps, laughter, or talk that filled the sprawling residence sounded here, only Kel's steps and the click of her dog's claws on the stone floor.

They made an interesting pair. The fourteen-year-old girl was big for her age, five feet nine inches tall, and dressed informally in breeches and shirt. Both were a dark green that emphasized the same color in her green-hazel eyes. Her dark boots were comfortable, not fashionable. On her belt hung a pouch and a black-hilted dagger in a plain black sheath. Her brown hair was cut to earlobe length. It framed a tanned face dusted with freckles across a delicate nose. Her mouth was full and decided.

The dog, known as Jump, was barrel-chested, with slightly bowed forelegs. His small, triangular eyes were set deep in a head shaped like a heavy chisel. He was mostly white, but black splotches covered the end of his nose, his lone whole ear, and his rump; his tail plainly had been broken twice. He looked like a battered foot soldier to Kel's young squire, and he had proved his combat skills often.

At the end of the hall stood a pair of wooden doors carved with a sun, the symbol of Mithros, god of law and war. They were ancient, the surfaces around the sun curved deep after centuries of polishing. Their handles were crude iron, as coarse as the fittings on a barn door.

Kel stopped. Of the pages who had just passed the great examinations to become squires, she was the only one who had not come here before. Pages never came to this hall. Legend held that pages who visited the Chapel of the Ordeal never became squires: they were disgraced or killed. But once they were squires, the temptation to see the place where they would be tested on their fitness for knighthood was irresistible.

Kel reached for the handle, and opened one door just enough to admit her and Jump. There were benches placed on either side of the room from the door to the altar. Kel slid onto one, glad to give her wobbly knees a rest. Jump sat in the aisle beside her.

After her heart calmed, Kel inspected her surroundings. This chapel, focus of so many longings, was plain. The floor was gray stone flags; the benches were polished wood without ornament. Windows set high in the walls on either side were as stark as the room itself.

Ahead was the altar. Here, at least, was decoration: gold candlesticks and an altar cloth that looked like gold chain mail. The sun disk on the wall behind it was also gold. Against the gray stone, the dark benches, and the wrought-iron cressets on the walls, the gold looked tawdry.

The iron door to the right of the sun disk drew Kel's eyes. There was the Chamber of the Ordeal. Generations of squires had entered it to experience something. None told what they saw; they were forbidden to speak of it. Whatever it was, it usually let squires return to the chapel to be knighted.

Some who entered the Chamber failed. A year-mate of Kel's brother Anders had died three weeks after his Ordeal without ever speaking. Two years after that a squire from Fief Yanholm left the Chamber, refused his shield, and fled, never to be seen again. At Midwinter in 453, months before the Immortals War broke out, a squire went mad there. Five months later he escaped his family and drowned himself

”The Chamber is like a cutter of gemstones," Anders had told Kel once. "It looks for your flaws and hammers them, till you crack open. And that's all I-or anyone will say about it."

The iron door seemed almost separate from the wall, more real than its surroundings. Kel got to her feet, hesitated, then went to it. Standing before the door, she felt a cold draft.

Kel wet suddenly dry lips with her tongue. Jump whined. "I know what I'm doing,” she told her dog without conviction, and set her palm on the door.

She sat at a desk, stacks of Parchment on either side. Her hands sharpened a goose quill with a penknife. Splotches of ink stained her fingers. Even her sleeves were spotted with "There you are, squire."

Kel looked up. Before her stood Sir Gareth the Younger, King
Jonathan's friend and adviser. Like Kel's, his hands and sleeves were ink-stained. “I need you to find these.” He passed a slate to Kel, who took it, her throat tight with misery. "Before you finish up today, please. They should be in section eighty-eight." He pointed to the far end of the room. She saw shelves, all stretching from floor to ceiling, al lstuffed with books, scrolls, and documents.

She looked at her tunic. She wore the badge Fief Naxen, Sir Gareth's home, with the white ring around it that indicated she served the heir to the fief. Her knight-master was a desk knight, not a warrior.

Work is work, she thought, trying not to cry. She still had her duty to Sir Gareth, even if it meant grubbing through papers. She thrust herself away ftom her desk-

-and tottered on the chapel's flagstones. Her hands were numb with cold, her palms bright red where they had touched the Chamber door.

Kel scowled at the iron door. "I'll do my duty," she told the thing, shivering.

Jump whined again. He peered up at her, his tail awag in consolation.

"I'm all right," Kel reassured him, but she checked her hands for inkspots. The Chamber had made her live the thing she feared most just now, when no field knight had asked for her service. What if the Chamber knew? What if she was to spend the next four years copying out dry passages from drier records? Would she quit? Would paperwork do what other pages' hostility had not-drive her back to Mindelan?