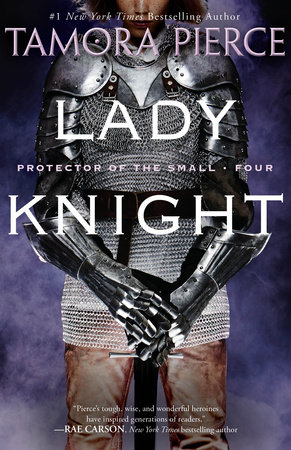 By Tamora Pierce
The stunning conclusion to the New York Times bestselling series from the fantasy author who is a legend herself: TAMORA PIERCE.

Victory is not always what it seems.

Keladry of Mindelan has finally achieved her lifelong dream of becoming a knight—but it’s not quite what she imagined. In the midst of a brutal war, Kel has been assigned to oversee a refugee camp. She’s sure it’s because Lord Wyldon still doesn’t see her as equal to the men. Nevertheless, she’s learning the importance of caring for people who have been robbed of their homes, wealth, and self-respect. Perhaps this battle is as important as the war with Scanra? When Kel has a vision of the man behind the horrific killing devices that her friends are fighting without her, will she honor her sworn duty . . . or embark on a quest that could turn the tide of the war?

More timely than ever, the Protector of the Small series is Anti-Bullying 101 while also touching on issues of bravery, friendship, and dealing humanely with refugees against a backdrop of an action-packed fantasy adventure.

Keladry of Mindelan lay with the comfortable black blanket of sleep wrapped around her. Then, against the blackness, light moved and strengthened to show twelve large, vaguely rat- or insectlike metal creatures, devices built for murder. The killing devices were magical machines made of iron-coated giants' bones, chains, pulleys, dagger-fingers and -toes, and a long, whiplike tail. The seven-foot-tall devices stood motionless in a half circle as the light revealed what lay at their feet: a pile of dead children.

With the devices and the bodies visible, the light spread to find the man who seemed to be the master of the creations. To Keladry of Mindelan, known as Kel, he was the Nothing Man. He was almost two feet shorter than the killing devices, long-nosed and narrow-mouthed, with small, rapidly blinking eyes and dull brown hair. His dark robe was marked with stains and burns; his hair was unkempt. He always gnawed a fingernail, or scratched a pimple, or shifted from foot to foot.

Once that image-devices, bodies, man-was complete, Kel woke. She stared at the shadowed ceiling and cursed the Chamber of the Ordeal. The Chamber had shown Kel this vision, or variations of it, after her formal Ordeal of knighthood. As far as Kel knew, no one else had been given any visions of people to be found once a squire was knighted. As everyone she knew understood it, the Ordeal was straightforward enough. The Chamber forced would-be knights to live through their fears. If they did this without making a sound, they were released, to be proclaimed knights, and that was the end of the matter.

Kel was different. Three or four times a week, the Chamber sent her this dream. It was a reminder of the task it had set her. After her Ordeal, before the Chamber set her free, it had shown her the killing devices, the Nothing Man, and the dead children. It had demanded that Kel stop it all.

Kel guessed that the Nothing Man would be in Scanra, to the north, since the killing devices had appeared during Scanran raids on Tortall last summer. Trapped in the capital by a hard winter, with travel to the border nearly impossible, Kel had lived with growing tension. She had to ride north as soon as the mountain passes opened if she was to sneak into Scanra and begin her search for the Nothing Man. Every moment she remained in Tortall invited the growing risk that the king would issue orders to most knights, including Kel, to defend the northern border. The moment Kel got those orders, she would be trapped. She had vowed to defend the realm and obey its monarchs, which would mean fighting soldiers, not hunting for a mage whose location was unknown.

"Maybe I'll get lucky. Maybe I'll ride out one day and find there's a line of killing devices from the palace right up to the Nothing Man's door," she grumbled, easing herself out from under her covers. Kel never threw off her blankets. With a number of sparrows and her dog sharing her bed, she might smother a friend if she hurried. Even taking care, she heard muffled cheeps of protest. "Sorry," she told her companions, and set her feet on the cold flagstones of her floor.

She made her way across her dark room and opened the shutters on one of her windows. Before her lay a courtyard and a stable where the men of the King's Own kept their horses. The torches that lit the courtyard were nearly out. The pearly radiance that came to the eastern sky in the hour before dawn fell over snow, stable, and the edges of the palace wall beyond.

The scant light showed a big girl of eighteen, broadshouldered and solid-waisted, with straight mouse-brown hair cut short below her earlobes and across her forehead. She had a dreamer's hazel eyes, set beneath long, curling lashes, odd in contrast to the many fine scars on her hands and the muscles that flexed and bunched under her nightshirt. Her nose was still unbroken and delicate after eight years of palace combat training, her lips full and quicker to smile than frown. Determination filled every inch of her strong body.

Motion in the shadows at the base of the courtyard wall caught her eye. Kel gasped as a winged creature waddled out into the open courtyard, as ungainly on its feet as a vulture. The flickering torchlight caught and sparked along the edges of metal feathers on wings and legs. Steel legs, flexible and limber, ended in steel-clawed feet. Between the metal wings and above the metal legs and feet was human flesh, naked, hairless, grimy, and in this case, male.

The Stormwing looked at Kel and grinned, baring sharp steel teeth. His face was lumpy and unattractive, marked by a large nose, small eyes, and a thin upper lip with a full lower one. He had the taunting smile of someone born impudent. "Startle you, did I?” he inquired.

Kel thanked the gods that the cold protected her sensitive nose, banishing most of the Stormwing's foul stench. Stormwings loved battlefields, where they tore corpses to pieces, urinated on them, smeared them with dung, then rolled in the mess. The result was a nauseating odor that made even the strongest stomach rebel. Her teachers had explained that the purpose of Stormwings was to make people think twice before they chose to fight, knowing what might happen to the dead when Stormwings arrived. So far they hadn't done much good as far as Kel could see: people still fought battles and killed each other, Stormwings or no. Tortall’s Stormwing population was thriving. But this was the first time she'd seen one on palace grounds.

Kel glared at him.
“Get out of here, you nasty thing! Shoo!”

"Is that any way to greet a future companion?" demanded the Stormwing, raising thin brown brows.