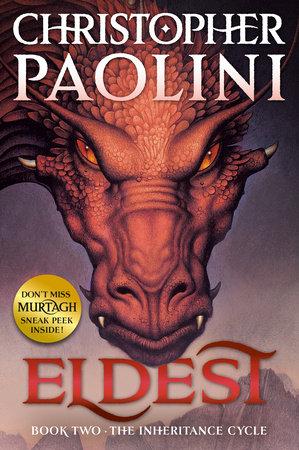 By Christopher Paolini On Tour
Don’t miss the latest book from the author of Eragon, The Fork, the Witch, and the Worm: Tales from Alagaësia!

Perfect for fans of Lord of the Rings, the New York Times bestselling Inheritance Cycle about the dragon rider Eragon has sold over 35 million copies and is an international fantasy sensation. With newly updated interlocking art across the spines of all four books!

Eragon and his dragon, Saphira, have just saved the rebel state from destruction by the mighty forces of King Galbatorix, cruel ruler of the Empire. Now Eragon must travel to Ellesmera, land of the elves, for further training in the skills of the Dragon Rider: magic and swordsmanship. Soon he is on the journey of a lifetime, his eyes open to awe-inspring new places and people, his days filled with fresh adventure. But chaos and betrayal plague him at every turn, and nothing is what it seems. Before long, Eragon doesn’t know whom he can trust.

Meanwhile, his cousin Roran must fight a new battle–one that might put Eragon in even graver danger.

Will the king’s dark hand strangle all resistance? Eragon may not escape with even his life. . . .

The Fork, the Witch, and the Worm by Christopher Paolini Official Book Trailer 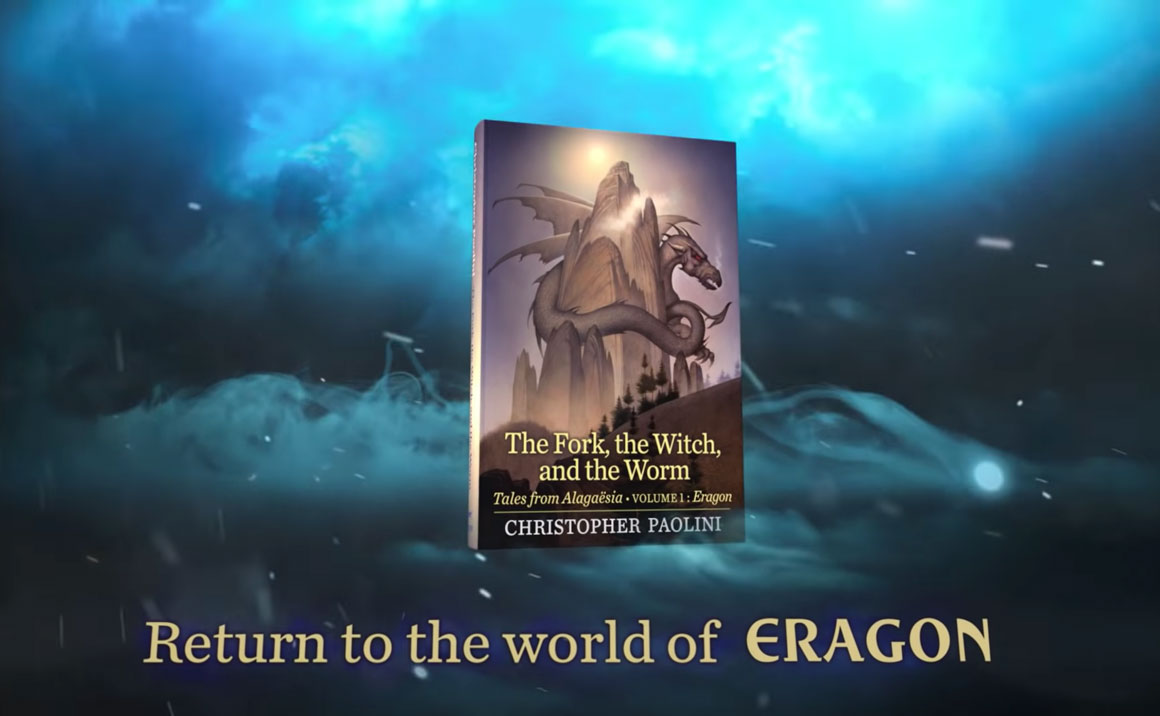 By Christopher Paolini
The Council of Elders
Saphira's breathing quickened, and she opened her eyes, yawning expansively. Good morning, little one.
Is it? He looked down and leaned on his hands, compressing the mattress. It's terrible . . . Murtagh and Ajihad . . . Why didn't sentries in the tunnels warn us of the Urgals? They shouldn't have been able to trail Ajihad's group without being noticed. . . . Arya was right, it doesn't make sense.
We may never know the truth, said Saphira gently. She stood, wings brushing the ceiling. You need to eat, then we must discover what the Varden are planning. We can't waste time; a new leader could be chosen within hours.
Eragon agreed, thinking of how they had left everyone yesterday: Orik rushing off to give King Hrothgar the tidings, Jörmundur taking Ajihad's body to a place where it would rest until the funeral, and Arya, who stood alone and watched the goings-on.
Eragon rose and strapped on Zar'roc and his bow, then bent and lifted Snowfire's saddle. A line of pain sheared through his torso, driving him to the floor, where he writhed, scrabbling at his back. It felt like he was being sawed in half. Saphira growled as the ripping sensation reached her. She tried to soothe him with her own mind but was unable to alleviate his suffering. Her tail instinctually lifted, as if to fight.
It took minutes before the fit subsided and the last throb faded away, leaving Eragon gasping. Sweat drenched his face, making his hair stick and his eyes sting. He reached back and gingerly fingered the top of his scar. It was hot and inflamed and sensitive to touch. Saphira lowered her nose and touched him on the arm. Oh, little one. . . .
It was worse this time, he said, staggering upright. She let him lean against her as he wiped away the sweat with a rag, then he tentatively stepped for the door.
Are you strong enough to go?
We have to. We're obliged as dragon and Rider to make a public choice regarding the next head of the Varden, and perhaps even influence the selection. I won't ignore the strength of our position; we now wield great authority written the Varden. At least the Twins aren't here to grab the position for themselves. That's the only good in the situation.
Very well, but Durza should suffer a thousand years of torture for what he did to you.
He grunted. Just stay close to me.
Together they made their way through Tronjheim, toward the nearest kitchen. In the corridors and hallways, people stopped and bowed to them, murmuring, "Argetlam," or "Shadeslayer." Even dwarves made the motions, though not as often. Eragon was struck by the somber, haunted expressions of the humans and the dark clothing they wore to display their sadness. Many women dressed entirely in black, lace veils covering their faces.
In the kitchen, Eragon brought a stone platter of food to a low table. Saphira watched him carefully in case he should have another attack. Several people tried to approach him, but she lifted a lip and growled sending them scurrying away. Eragon pretended to ignore the disturbances and picked at the food. Finally, trying to divert his thoughts from Murtagh, he asked, Who do you think has the means to take control of the Varden, now that Ajihad and the Twins are gone?
She hesitated. It's possible you could, if Ajihad's last words were interpreted as a blessing to secure the leadership. Almost no one would oppose you. However, that does not seem a wise path to take. I see only trouble in that direction.
I agree. Besides, Arya wouldn't approve, and she could be a dangerous enemy. Elves can't lie in the ancient language, but they have no such inhibition in ours-she could deny that Ajihad ever uttered those words if it served her purposes. No, I don't want the position. . . . What about Jörmundur?
Ajihad called him his right-hand man. Unfortunately, we know little about him or the Varden's other leaders. Such a short time has passed since we came here. We will have to make our judgment on our feelings and impressions, without the benefit of history.
Eragon pushed his fish around a lump of mashed tubers. Don't forget Hrothgar and the dwarf clans; they won't be quiet in this. Except for Arya, the elves have no say in the succession-a decision will be made before word of this even reaches them. But the dwarves can't be-won't be-ignored. Hrothgar favors the Varden, but if enough clans oppose him, he might be maneuvered into backing someone unsuited for the command.
And who might that be?
A person easily manipulated. He closed his eyes and leaned back. It could be anyone in Farthen Dûr, anyone at all.