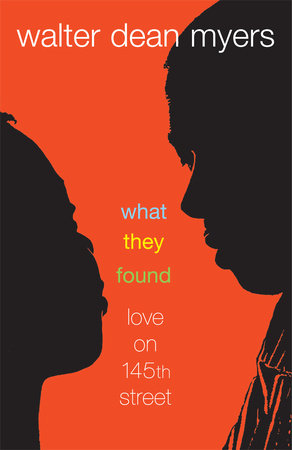 By the groundbreaking author of the award-winning Monster–a visionary who influenced and inspired a generation–this story take us back to the world of 145th Street: Short Stories to show how love can be found, and thrive, in the most unlikely places.

Curtis finds love in Iraq as he struggles to stay alive in a war he doesn't want to fight, and Letha discovers her own beauty in the love of her child. There is the "good daughter" who realizes that there's only one way to help her brother and her family. Other stories center on the daily drama of the Curl-E-Que beauty shop, or capture the slapstick side of passion.

By Walter Dean Myers
When Daddy first came up with the idea we just all sat there crying our eyes out. We said we would do it, but I don’t think anybody believed it at the time. He knew we were too upset even to talk about it, especially Mama. So the day I brought him tea and he asked me to sit down to talk about it, he got right to the point.

“Abeni, you and me have always been tight,” Daddy said, sitting up on the propped pillows. “We’ve always had something special going on.”

“Look, the other day when I told your mama what I wanted, I tried to make it a little light because I knew she was going to be upset,” Daddy said.

“It’s hard to talk about,” I said, feeling the tears welling up in my eyes.

“I know, baby, and I know your mama wants to do the right thing.” Daddy’s hand was shaking slightly as he brought the cup slowly to his lips. He sipped the tea, took a deep breath, and exhaled slowly.

“I can hold things down a little better now that I’m finished with that chemotherapy,” he said. “You know, what I wanted to do was to go over the things I said the other day and maybe tell you why I said them.”

“Yeah, well, that was something,” Daddy said. He smiled, but his face was drawn. “Big Joe giving himself a funeral while he was still alive gave me the idea. People still talk about that funeral and that little Puerto Rican gal singing. She’s in college now, ain’t she?”

“Out in St. Louis, studying journalism,” I said.

“When I came to the realization that this cancer had won the last round, I started thinking it over—you know, adding up the pluses and minuses—that kind of thing.”

“Daddy, you’re going to get me crying again.”

“Baby, I don’t care if you cry, but I know I can count on you more than I can on your mama and Noee,” Daddy said. “Your mama wants to see me off proper, and that’s good. We’re a churchgoing family and a homecoming ceremony is what everybody expects. But like I said before, I’m a black man who loves the three ladies he’s enjoyed his life with. Noee ain’t nothing but a child—lovely as she wants to be, she ain’t got your spunk, Abeni. I guess you being the firstborn I wasn’t sure what I was doing and halfway tried to make you into a boy.”

“Well, can you see what I’m talking about?” he asked. “Can you see that this is a kind of gift I can give to my ladies?”

I tried to say yes but the tears were on their way and I was putting my head on his chest.


A year ago my family had big plans. Mama had been working for twelve years in LaRose Beauty Salon and now the owner was retiring and my parents had put the money together to buy the business. “And we’re changing the name to the Curl-E-Que!” Mama said. “And my girls will work alongside me.”

We were all excited about opening up the shop, counting on Daddy’s job with the bus company to keep us going while we built it up.

Then Daddy got ill and all the joy just drained from the family. We were close. Mama and Daddy had been married forever, and people on the block said that me and my sister were the most spoiled children in the neighborhood. That’s how Daddy was.

“You start them strong and they don’t go wrong,” he always said.

I was strong. When I was young, Daddy, a big bear of a man, had me playing football and basketball and every other sport. I was tall like him, and big-boned. I liked to compete. Mama didn’t know anything about sports, but she didn’t mind me playing and loved to see me and Daddy together.

“Troy Evans,” she would say, “you got the girl acting more like your little brother than your daughter!”

When Noee was big enough to go out and play, I thought we would be teammates, but she was different. Shy, big-eyed, and quiet, she was more of a watcher. Noee was happy just to be in the room with the family or, when we had dinner, to make sure that everyone had enough to eat. I had always been Daddy’s girl. I felt terrible when we learned that Daddy was dying, but I felt good that it was me he was calling on to see to his dying wishes.

Daddy had said to us, “What I’m thinking about is the beauty parlor you’ve been talking about for so long.”

“Troy, you don’t have to worry about that,” Mama started.

“Honey, the best thing that ever happened to me was to have a family to worry about,” Daddy said. “You see these homeless guys hanging around the streets and some people say ain’t it a shame that they don’t have a home. What I say is ain’t it a shame they don’t have a family to take care of and be worried over. That’s why I’m asking you to go ahead with your plans for the beauty shop and then make my ceremony something that’s going to be special. If Big Joe can do something with a funeral, so can I.”

But . . . Big Joe’s funeral was fake. He said he didn’t want to waste a good funeral on himself after he was dead, so he gave himself a ceremony while he was still alive. Daddy was right, people did talk about it. Some still thought it was stupid.

“Man don’t have a bit of sense,” Mrs. Lucas had said. “He’s as cluck-headed as a one-legged chicken!”

I liked Big Joe, and after my father told me how much he was depending on me I went to Big Joe for advice.

“Now what does he want you to do?” Big Joe had one foot propped up on a milk crate as he sat in front of his apartment.

“He wants us to have the grand opening of the beauty parlor and combine it with his funeral and a barbecue,” I said. “The fashion show part is my idea.”

“And what Mama Evans saying about all this?”

“Just what he thought she would,” I said. “She wants to have a traditional funeral for him. And I can see that as a sign of respect.”

“Yeah, well, a lot of folks are going to be mad at you if you do like you say,” Big Joe said. “Colored folks don’t like to play around with their funerals.”

“People in New Orleans have jazz funerals,” I said. “I know we can pull this off. What I need from you is for you to come and say a few words if we can’t get Reverend Glover to go along.”

“You get it set up and I’ll be there,” Big Joe said. “Your father’s quality people. Not many around like him anymore.”

We bought the shop on May 15. We had a big sign over the store and a smaller one in the window saying, under new management. We took Daddy downstairs to see and he was so pleased.

Mama wasn’t any good with the planning. She couldn’t think about losing the man she had loved for so many years.

“Not a lot of black men can leave their families in good shape,” Daddy said. “Me seeing my ladies with their own business, their morals intact, and three good brains between them is a blessing.”

As Noee and I cleaned the store and painted it I could feel myself weakening, wondering if I could really make his dying a kind of celebration. When Daddy was taken to the hospital early one morning we were sure he wasn’t coming home again.

“Bring me some pictures of the store,” he said in the cab. “You know how to use that digital camera I bought you.”

“He’s thinking of everything to make this work,” Mama said on the way home. “He’s always been kind of foxy that way.”

Yes he was, even from the hospital.