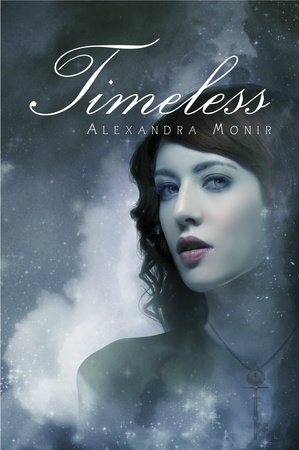 When tragedy strikes Michele Windsor’s world, she is forced to uproot her life and move across the country to New York City, to live with the wealthy, aristocratic grandparents she’s never met. In their old Fifth Avenue mansion filled with a century’s worth of family secrets, Michele discovers a diary that hurtles her back in time to the year 1910. There, in the midst of the glamorous Gilded Age, Michele meets the young man with striking blue eyes who has haunted her dreams all her life – a man she always wished was real, but never imagined could actually exist. And she finds herself falling for him, into an otherworldly, time-crossed romance.

Michele is soon leading a double life, struggling to balance her contemporary high school world with her escapes into the past. But when she stumbles upon a terrible discovery, she is propelled on a race through history to save the boy she loves – a quest that will determine the fate of both of their lives.

Michele stood alone in the center of a hall of mirrors. The glass directly in front of her revealed a girl identical to Michele, with the same chestnut hair, ivory skin, and hazel eyes; even wearing the same outfit of dark denim jeans and black tank top. But when Michele moved forward, the girl in the glass remained still. And while Michele's own neck was bare, the reflection in the mirror wore a strange key hanging from a gold chain, a key unlike anything Michele had ever seen.

It was a gold skeleton key in a shape similar to a cross, but with a circular bow at the top. The image of a sundial was carved into the bow. The key looked weathered and somehow wise, as though it weren't inanimate, but a living being with over a century's worth of stories to share. Michele was momentarily seized by an urge to reach through the glass and touch the curious key. But all she felt was the cool surface of the mirror, and the girl with Michele's face betrayed no notice of her.

"Who are you?" Michele whispered. But the mirror image didn't respond, didn't even appear to have heard. Michele shivered nervously, and squeezed her eyes shut. What was this?

And then, suddenly, the silence was broken. Someone was whistling, a slow melody that created goose bumps on the back of Michele's neck. Her eyes snapped open, and she watched in shock as someone joined the girl in the mirror. Michele's breath caught in her throat. She felt paralyzed, unable to do anything but stare at him through the glass.

His eyes were such a deep blue they seemed to dazzle against his contrasting thick dark hair. Eyes the color of sapphires. And though she could somehow tell that he was around her age, he was dressed like none of the other boys she knew. He wore a crisp white collared shirt under a white silk vest and tie, formal black pants, and black patent leather shoes. In his white-gloved hands, he held a black top hat lined with silk. The formal clothing suited him. He was more than good-looking, much more than could be conveyed by the word "handsome." Michele felt an unfamiliar ache as she watched him.

Her heart racing, she stared at him as he carelessly peeled off his gloves and dropped his hat, the three items falling together in a heap on the floor. He then reached for the hand of the girl in the mirror. And to Michele's astonishment, she felt his touch. She quickly looked down, but though her hand was empty, she could feel his fingers interlacing with hers, the sensation causing a flutter inside her.

What's happening to me? Michele thought frantically. But suddenly she couldn't think anymore, for as she looked at the boy and girl embracing in the mirror, she felt strong arms encircling her own waist.

"I'm waiting for you," he murmured, smiling a slow, familiar grin that seemed to hint at a secret between them.

And for the first time, Michele and the mirror reflection were in sync as they both whispered, "Me too."


Michele Windsor awoke with a shock, gasping for breath. As she took in the sight of her darkened bedroom, her heartbeat slowed and she remembered--it was just The Dream. The same strange, intoxicating dream that had haunted her on and off for years. As always, waking up from it brought the pain of disappointment into the pit of Michele's stomach, as she found herself missing him--this person who didn't even exist.

She'd been just a little girl when she'd first begun dreaming of him, so young that she hadn't yet resembled the teenager in the mirror. The dreams were infrequent then; they came just once or twice a year. But as she grew up, looking like the twin of the girl in the mirror, the dreams began to flood her consciousness with a new urgency, as if they were trying to tell her something. Michele frowned as she slumped back against her pillows, wondering if she would ever understand. But then, Confusion and Mystery had been principal players in her life since the day she was born.

Michele rolled over onto her side, facing her bedroom window, and listening to the waves lapping the shore outside the Venice Beach bungalow. The sound usually lulled her to sleep quickly, but not that night. She couldn't seem to get those sapphire eyes out of her head. Eyes that she had practically memorized, without ever having seen them in her waking life.