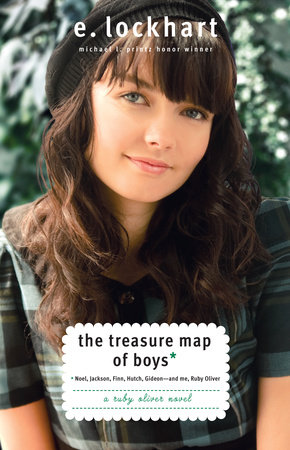 The Treasure Map of Boys

By E. Lockhart On Tour
From E. Lockhart, author of the highly acclaimed, New York Times bestseller We Were Liars, which John Green called "utterly unforgettable," comes The Treasure Map of Boys, the third book in the uproarious and heartwarming Ruby Oliver novels.

Ruby is back at Tate Prep, and it’s her thirty-seventh week in the state of Noboyfriend. Her panic attacks are bad, her love life is even worse, and what’s more:

Noel is writing her notes, Jackson is giving her frogs, Gideon is helping her cook, and Finn is making her brownies. Rumors are flying, and Ruby’s already-sucky reputation is heading downhill.

Not only that, she’s also: running a bake sale, learning the secrets of heavymetal therapy, encountering some seriously smelly feet, defending the rights of pygmy goats, and bodyguarding Noel from unwanted advances.

In this companion novel to The Boyfriend List and The Boy Book, Ruby struggles to secure some sort of mental health, to understand what constitutes a real friendship, and to find true love—if such a thing exists.
Read more
Read less
Read Excerpt
+ Add to My Bookshelf
+ Add to Goodreads

The Treasure Map of Boys

Ruby,
In laboratories dim
We bend to Fleischman's whim
And suffer twice a week
Horrors terrible to speak.
Will you deign
To ease my pain?
Or will I slowly
Go insane?
Say you'll be my partner true
In Chemistry, it's me and you.

--written on yellow legal paper in Noel's cramped, somewhat illegible scrawl; found in my mail cubby, folded eight thousand times and with a bit of coffee spilled on one corner.

the first day back from winter break, junior year, I walked into Chem to find a head of red cabbage on every lab table. Also a juicer. Tate Prep is the kind of school where the chemistry teacher has a budget to buy fourteen juicers. I go there on scholarship.

Mr. Fleischman started the class yelling, "Happy New Year, people! Wash your hands and juice your cabbages! No fingers in the machinery!"

He was a small white man, only five foot two, with a pug nose and a large bald spot ill concealed by a comb-over. He jumped up and down more than most fifty-year-olds do and dyed what little hair he had left a shiny black. "Kitchen science!" cried Fleischman. "That's our new unit, people. Everyday chemical reactions that happen in your very own home."

I washed my hands and juiced my cabbage. Sadly, I was familiar with the procedures for juicing vegetables because my mother had started the new year by embarking on a raw food diet. Her new idea of breakfast was celery juice.

The cabbage was my cabbage and my cabbage alone because Noel was late. I'd gotten his note that morning in my mail cubby, but I hadn't seen him since before the holiday.

"Say you'll be my partner true/In Chemistry, it's me and you," he'd written.
Only now he wasn't here.

"Come to the front and get six plastic cups, protective gloves, baking soda, orange juice, liquid Drano, ammonia and vinegar," announced Fleischman. Katarina and Ariel, golden girls of the junior class, were squealing at the semi-disgusting purple glop that had formed in our juicers.

"I think I'm gonna puke from the smell," said Ariel.

Fleischman ignored her. "Be careful with the ammonia, people. And the Drano. I'm not seeing the gloves on your hands. The gloves go on your hands. Is that too much to expect you to figure out?"

I had to make three trips to the front to get everything. The third time, Ariel was there too. She held a little dish of orange juice. "Hello, Ruby," she said to me. "How was your break?"

"Good," I answered. Since the debacles of sophomore year had died down, Ariel, Katarina and Heidi all spoke to me if they had to. But I knew what they really thought of me.

"Cool." I shrugged. Skiing is not in my budget. I spent winter break helping my dad repair cracks in his greenhouse off the side of the houseboat we live in and watching way too many movies. Dad runs an obscure and deeply earnest gardening newsletter entitled Container Gardening for the Rare Bloom Lover.

Why was Ariel making conversation with me, anyhow?

"Yeah," she went on. "Me, Katarina and Heidi were all about Sneaky Pete and Blueberry Cat Track."

I had no idea what she was talking about. Possibly ski trails. Possibly coffee drinks. Video games? Sexual positions?

"But Cricket skied the Chute and Kim owned Gunners Bowl," Ariel went on. "Jackson, Kyle and those guys came for New Year's. Such an excellent party."

That was why she was telling me this.

Kim and Cricket are my ex-friends. Ariel was making sure I knew they'd all spent New Year's skiing together, which meant that Kim and Cricket were now firmly in the Katarina set.

"Spankin'," I said. Because of course it hurt that she had Kim and Cricket now. She meant it to hurt. There was nothing I could say in retaliation except something that would confuse her.

"Whatever," Ariel answered, wrinkling her nose.

I went back to my table and put spoonfuls of baking soda in my cups of cabbage juice.

"I see it's turning blue, people!" Fleischman cried, jumping. "That's good. Now add precise dropperfuls of your various other substances to the blue cabbage juice, and make a record of how many droppers it takes to return the fluid to reddish purple. Then come to conclusions about the acidic and basic contents of your ingredients."
I added ammonia to one of the cups. The juice turned green. Did that mean it was acidic or basic?

What were we supposed to be writing down, again?

Where was Noel? Was he really going to ask to be my lab partner and then ditch class?

And why had he asked to be my lab partner, anyway? We had been lab partners last term. We were obviously going to be lab partners this term too. There was no need to write a note about it.

"Later in the term we're doing the science of baking!" Fleischman continued. "Did you people know that chemical reactions are taking place constantly in your home ovens? In your very own blenders? It's fascinating, I promise you."

The plastic gloves felt hot on my hands and I was starting to sweat in the warm lab. I was nervous about seeing Noel.

Because Noel liked me.

Or at least, he once liked me.

And I liked him back, if liking someone means you want to touch him whenever he's sitting next to you and he makes you laugh and you find yourself thinking about him, like, when you're alone in the shower with the door locked. If liking someone means that whenever he's in a room with you, even an auditorium or the refectory, you know exactly where he is and what he's doing, like you've got Noel radar.

Last fall, Noel had asked if he could kiss me. I wanted to say yes and throw myself on top of him like a kissing lunatic--but there were a thousand reasons not to. It was very complicated. So I told him no.

After that incident of extreme awkwardness, we had settled into being lab partners and occasionally eating lunch together with other people; a semi-friendship that didn't involve e-mailing, calling, writing each other notes or hanging out after school. So far, it had worked out okay. I mean, I just tried not to think about him--and most of the time I managed it.