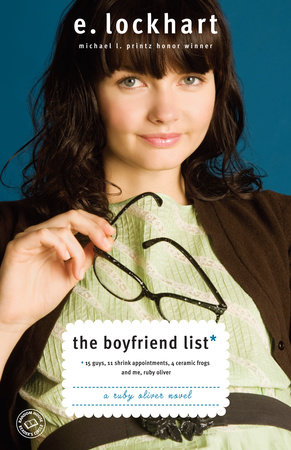 By E. Lockhart On Tour
From E. Lockhart, author of the highly acclaimed, New York Times bestseller We Were Liars, which John Green called "utterly unforgettable," comes The Boyfriend List, the first book in the uproarious and heartwarming Ruby Oliver novels.

lost all her other friends (Nora, Cricket),

did something suspicious with a boy (#10),

did something advanced with a boy (#15),

drank her first beer (someone handed it to her),

had a panic attack (scary),

failed a math test (she’ll make it up),

hurt Meghan’s feelings (even though they aren’t really friends),

became a social outcast (no one to sit with at lunch)

and had graffiti written about her in the girls’ bathroom (who knows what was in the boys’!?!).

Adam was this boy that I used to stare at in preschool. His hair was too long, that's why. It stuck out behind his ears and trailed down his neck, whereas all the other five-year-old boys had bowl haircuts. I didn't have too much hair myself--it didn't grow fast and my mom was always trimming it with her nail scissors--so I was a little obsessed with hair.

Adam's last name was Cox, and after I had been eyeing him for a couple of months, I named this stuffed bunny I had after him. All the grown-ups laughed when I said the bunny's name was Cox, and I didn't understand why.

Pretty soon, Adam and I were playing together. Our parents took us to the zoo, and we'd spend time after school in the nearby playground, drawing with chalk and walking up the slide. I remember we went swimming a few times at the YMCA, and hung out in a plastic wading pool in his backyard. His cat had kittens, and I got to help name them because I came over the same morning they were born.

And that was it.

We were only five years old.

When I was old enough for kindergarten, I started at Tate Prep and he went somewhere else.

Doctor Z looked down at the Boyfriend List. She didn't seem too impressed with my Adam Cox story. Or maybe it was the list itself she didn't think much of--though it had taken me a lot of work to do. I started the night after our first appointment, in bed in my pajamas, writing on this thick, cream-colored stationery my grandma Suzette got me. It says Ruby Denise Oliver on the top in this great curlicue font--but I never use it, since anyone I'd want to write to has e-mail.

My first draft, I only wrote down Jackson and Cabbie. Then I added Gideon at the beginning, with a question mark next to his name. Then Michael, the guy who was my first kiss--putting him in between Gideon and Jackson.

Then I turned off my light and tried to go to sleep.

Well, I wasn't sleeping well lately anyway--but I lay there with this feeling that the list wasn't finished. I remembered that I'd told Doctor Z about Angelo already, so I turned the light back on and squeezed him in between Jackson and Cabbie.

Oh, and I had mentioned Noel to Doctor Z, too--though we were only friends. I stuck him in right after Jackson, just to have somewhere to put him. Then I rewrote the list in nice handwriting and managed to get myself to sleep--but in the middle of the night I woke up and wrote down two more boys and my History & Politics teacher.

Then I crossed them all out.

At breakfast the next morning, I jumped up from my cereal bowl and put one of them back on.

At school, the hallway by the mail cubbies suddenly seemed like an obstacle course of old crushes and rejections. Shiv Neel. Finn Murphy. Hutch (ag). All three in my face before I even got to my first class. I pulled out the list and wrote them down.

All day long, I thought about boys. (Well, even more than usual.) And the more I thought, the more I remembered.

Chase, who gave me the necklace.

Billy, who squeezed my boob.

Never in a million years would I have expected the list to be anywhere near so long. But by the end of the day, there were fifteen names on there, and the list was all scribbly-looking, with arrows zooming around to show what order the boys should really go in.

It was a mess, so during geometry I recopied it on the stationery in my best writing and threw the old one away.2 Then I tucked it into a matching envelope to give to Doctor Z.

"Why did you stop playing with Adam?" Doctor Z wanted to know.

"I told you, I started a different school."

"Is there something more?" she said, looking at me over those red-rimmed glasses.

I had liked making the list, it was kind of fun. But ag. What was the point of talking about something from ten years ago that wasn't even important? Zoo trips with Adam Cox and his mom weren't exactly significant to my mental development.

Not that there was anything else I wanted to talk about.

I just wanted the panic attacks to stop.

And the hollow, sore feeling in my chest to go away.

And to feel like I could make it through lunch period without choking back tears.

And Jackson. I wanted Jackson back.

"Did you ever see him again?"

"Who?" I had forgotten what we were talking about.