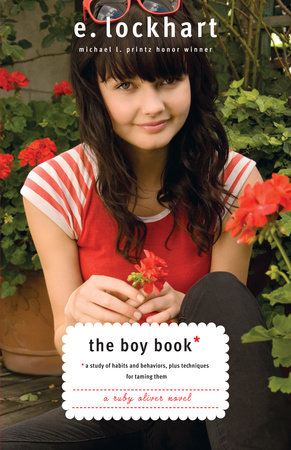 By E. Lockhart On Tour
From E. Lockhart, author of the highly acclaimed, New York Times bestseller We Were Liars, which John Green called "utterly unforgettable," comes The Boy Book, the second book in the uproarious and heartwarming Ruby Oliver novels.

Here is how things stand at the beginning of newly-licensed driver Ruby Oliver's junior year at Tate Prep:

• Kim: Not speaking. But far away in Tokyo.
• Cricket: Not speaking.
• Nora: Speaking--sort of. Chatted a couple times this summer when they bumped into each other outside of school--once shopping in the U District, and once in the Elliot Bay Bookstore. But she hadn't called Ruby, or anything.
• Noel: Didn't care what anyone thinks.
• Meghan: Didn't have any other friends.
• Dr. Z: Speaking.
• And Jackson. The big one. Not speaking.

But, by Winter Break, a new job, an unlikely but satisfying friend combo, additional entries to The Boy Book and many difficult decisions help Ruby to see that there is, indeed, life outside the Tate Universe.
Read more
Read less
Read Excerpt
+ Add to My Bookshelf
+ Add to Goodreads

By E. Lockhart
1.
The Care and Ownership of Boobs

(a subject important to our study of the male humanoid animal because the boobs, if deployed properly, are like giant boy magnets attached to your chest.

Or smallish boy magnets. Or medium.

Depending on your endowment.

But boy magnets. That is the point.

They are magnets, we say. Magnets!)

1.If you jiggle, wear a bra. This means you. (Yes, you.) It is not antifeminist. It is more comfy and keeps the boobs from getting floppy.

2.No matter how puny your frontal equipment, don’t wear the kind with the giant pads inside. If a guy squeezes them, he will wonder why they feel like Nerf balls instead of boobs. And if you forget and wear a normal bra one day, everyone will then speculate on the strange expanding and contracting nature of your boobage. (Reference: the mysteriously changing chestal profile of Madame Long, French teacher and sometime bra padder.)

3.A helpful hint: For optimal shape, go in the bathroom stall and hike them up inside the bra.

4.Do not perform the above maneuver in public, no matter how urgent you think it is.

5.Do not go topless in anyone’s hot tub. Remember how Cricket had to press her chest against the side of the Van Deusens’ tub for forty-five minutes when Gideon and his friends came home? Let that be a lesson to you. (Yes, you.)

6.Do not sunbathe topless either, unless you’re completely ready to have sunburnt boobs whose skin will never be the same again (Reference: Roo, even though she swears she used sunblock) or unless you want to be yelled at by your mother for exposing yourself to the neighbors (Reference: Kim, even though really, no one saw and the neighbors were away on vacation).

—from The Boy Book: A Study of Habits and Behaviors, Plus Techniques for Taming Them (A Kanga-Roo Production), written by me, Ruby Oliver, with number six added in Kim’s handwriting. Approximate date: summer after freshman year.

The week before junior year began, the Doctors Yamamoto threw a ginormous going-away party for my ex-friend Kim.

She is my ex-friend. Not my friend.

Kim Yamamoto was leaving to spend a semester at a school in Tokyo, on an exchange program. She speaks fluent Japanese.

Her house has a big swimming pool, an even bigger yard, and a view of the Seattle skyline. On the eve of her going away, so I hear, her parents hired a sushi chef to come and chop up dead fish right in front of everyone, and the kids got hold of a few wine bottles. Supposedly, it was a great party.

I do know that the following acts of ridiculousness were perpetrated that night, after the adults got tired and went to bed around eleven.

1.Someone chundered behind the garden shed and never confessed. There were a number of possible suspects.

2.People had handstand contests and it turns out Shiv Neel can walk on his hands.

3.With the party winding down and all the guys inside the house watching Letterman, Katarina Dolgen, Heidi Sussman and Ariel Olivieri wiggled out of their clothes and went skinny-dipping.

4.Nora Van Deusen decided to go in, too. She must have had some wine to do something like that. She’s not usually a go-naked kind of girl.1

5.A group of guys came out onto the lawn and Nora’s boobs were floating on top of the water as she sat on the steps of the pool. Everyone could see them.

6.Shep Cabot, aka Cabbie, who squeezed my own relatively small boob last year with great expertise2 but who is otherwise a lame human being as far as I can tell, snapped a photo—or at least pretended he did. Facts unclear upon initial reportage.

7.Nora grabbed her boobs and ran squealing into the house in search of a towel. Which was a bad idea, because she wasn’t wearing anything except a pair of soggy blue panties. Cabbie snapped, or said he snapped, another photo. The rest of the girls stayed coyly in the pool until Nora, having got her wits together and wearing a pair of Kim’s sweatpants and a T-shirt, came out and brought them towels.

I know all this because no one was talking about anything else on the first day of school.

Meghan Flack, who carpools me to school, was my only friend.

Last year, Meghan and her hot senior boyfriend, Bick, spent every waking minute together, annoying all the girls who would have liked to date Bick, and also all the guys who didn’t want to watch the two of them making out at the lunch table.

People hated Meghan. She was the girl you love to hate—not because she does anything mean or spiteful, but because she’s naturally gorgeous, extremely oblivious, and completely boy-oriented. Because she licks her lips when she talks to guys, and pouts cutely, and all the guys stare at her like they can’t pull their eyes away.

But I don’t hate her now. She doesn’t even bug me anymore. And she was lost on the first day of school junior year, because Bick had left for Harvard the week before.

So Meghan and I were standing in front of the mail cubbies when we heard a crew of newly minted senior girls discussing Kim’s party and what happened. Then we heard more from the guys who sat behind us in American Literature, and then from a girl who is on the swim team with me. By the end of first period it was clear that Nora’s boobs were going to be the major focus of nearly every conversation for the rest of the day.

Because Nora is stacked.

She is just not a small girl.

1 Nora was the only one of my old foursome (her, me, Cricket and Kim) who had never yet experienced some social or bodily horror related to taking her top off. See The Boy Book entry, above.