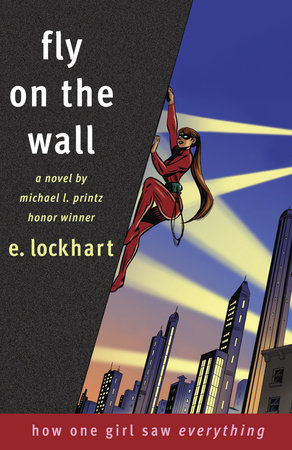 Fly on the Wall

By E. Lockhart On Tour

From E. Lockhart, author of We Were Liars—the New York Times bestselling phenomenon—and the uproarious and heartwarming Ruby Oliver books, comes a fast-paced and hysterically funny novel that answers the question: What would it be like to be a fly on the wall in the boy's locker room?

At the Manhattan School for Art and Music, where everyone is “different” and everyone is “special,” Gretchen Yee feels ordinary. She’s the kind of girl who sits alone at lunch, drawing pictures of Spider-Man, so she won’t have to talk to anyone; who has a crush on Titus but won’t do anything about it; who has no one to hang out with when her best (and only real) friend Katya is busy.

One day, Gretchen wishes that she could be a fly on the wall in the boys’ locker room–just to learn more about guys. What are they really like? What do they really talk about? Are they really cretins most of the time?

Fly on the Wall is the story of how that wish comes true.

Fly on the Wall

By E. Lockhart
I am eating alone in the lunchroom.

Ever since Katya started smoking cigarettes, she's hanging out back by the garbage cans, lighting up with the Art Rats. She bags her lunch, so she takes it out there and eats potato chips in a haze of nicotine.
I hate smoking, and the Art Rats make me nervous. So here I am: in my favorite corner of the lunchroom, sitting on the floor with my back against the wall. I'm eating fries off a tray and drawing my own stuff--not anything for class.

Whatever. They still taste okay.

KA-POW! Spider-Man smacks Doctor Octopus off the edge of the building with a swift kick to the jaw. Ock's face contorts as he falls backward, his metal tentacles flailing with hysterical fear. He has an eighty-story fall beneath him, and--
Spidey has a great physique. Built, but not too built. Even if I did draw him myself.

I think I made his butt too small.

I wish I had my pink eraser, I don't like this white one.

There. A finished Spidey outline. I have to add the suit. And some shadowing. And the details of the building. Then fill in the rest of Doc Ock as he hurtles off the edge.


Cammie Holmes is staring at me like I'm some lower form of life.
"What are you looking at?" I mutter.

"Then. Stop. Staring," I say, sharpening my pencil again, though it doesn't need it.

This Cammie is all biscuits. She's stacked like a character in a comic book. Cantaloupes are strapped to her chest.

Her only redeeming quality.

"Why are you licking your Superman drawing?" Cammie tips her nose up. "That's so kinky. I mean, I've heard of licking a centerfold, but licking Superman?"

"Whatever. Get a life, Gretchen."

She's gone. From across the lunchroom comes her nasal voice: "Taffy, get this: I just caught Gretchen Yee giving oral to some Superman drawing she made."


Superman is a big meathead. I'd never draw Superman. Much less give him oral.

I haven't given anybody oral, anyway.


I hate those girls.

Taffy is doing splits in the middle of the lunchroom floor, which is just gross. Who wants to see her crotch like that? Though of course everybody does, and even if they didn't, she wouldn't care because she's such a unique spirit or whatever.

I hate those girls, and I hate this place: the Manhattan High School for the Arts. Also known as Ma-Ha.

Supposedly, it's a magnet high school for students talented in drawing, painting, sculpture or photography. You have to submit a portfolio to get in, and when I did mine (which was all filled with inks of comic-book characters I taught myself to draw in junior high) and when I finally got my acceptance letter, my parents were really excited. But once you're here, it's nothing but an old, ugly New York public school building, with angry teachers and crap facilities like any other city public school--except I've got drawing class every day, painting once a week and art history twice. I'm in the drawing program.

People have mohawks and dreadlocks and outrageous thrift-store clothes; no one would be caught dead in ordinary jeans and a T-shirt, because they're all so into expressing their individuality. A girl from the sculpture program wears a sari every day, even though her family's Scandinavian. There's that kid who's always got that Pink Panther doll sticking out of her jacket pocket; the boy who smokes using a cigarette holder like they did in forties movies; a girl who's shaved her head and pierced her cheeks; Taffy, who does Martha Graham-technique modern dance and wears her leotard and sweats all day; and Cammie, who squeezes herself into tight goth outfits and paints her lips vampire red.

They all fit in here, or take pride in not fitting in, if that makes any sense--and if you're an ordinary person you've got to do something at least, like dye your hair a strange color, because nothing is scorned so much as normalcy. Everyone's a budding genius of the art scene; everyone's on the verge of a breakthrough. If you're a regular-looking person with regular likes and dislikes and regular clothes,
and you can draw so it looks like the art in a comic book,
but you can't "express your interior life on the page," according to Kensington (my drawing teacher),
and if you can't "draw what you see, rather than imitate what's in that third-rate trash you like to read" (Kensington again),
then you're nothing at Ma-Ha.

Two months ago I capitulated to nonconformity-conformity and had my hair bleached white and then dyed stop-sign red. It cost sixty dollars and it pissed off my mother, but it didn't work.