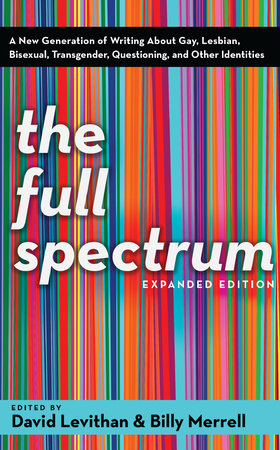 By David Levithan and Billy Merrell
Teens are more aware of sexuality and identity than ever, and they’re looking for answers and insights, as well as a community of others. In order to help create that community, YA authors David Levithan and Billy Merrell have collected original poems, essays, and stories by young adults in their teens and early 20s. The Full Spectrum includes a variety of writers—gay, lesbian, bisexual, straight, transitioning, and questioning—on a variety of subjects: coming out, family, friendship, religion/faith, first kisses, break-ups, and many others.

This one of a kind collection will, perhaps, help all readers see themselves and the world around them in ways they might never have imagined. We have partnered with the Gay, Lesbian and Straight Education Network (GLSEN) and a portion of the proceeds from this book will be donated to them.
Read more
Read less
Read Excerpt
+ Add to My Bookshelf
+ Add to Goodreads

My first kiss was a girl.

It was almost like a pity kiss, a kiss to get me through that rite of passage, the way I wanted it. Rose was the only person who knew I liked girls, she was the only one I trusted enough to tell. We went to junior high together in a small town in Pennsylvania. She had frizzy hair and a mother who took Prozac and yelled a lot. Rose lived on this surreal plane of reality, allowing the world to be as dramatic as it was at the age of fifteen, and I loved her for that.

We were in color guard together. While marching band appeared to be lowest rung on the ladder of popularity, color guard managed to go even below that, to a subterranean territory of un-coolness. I don’t really remember what we were doing there. I had played the trumpet but was always last chair, so when they told me I had to join marching band, that I had to go out in those stupid costumes under those bright football-game lights, I opted for color guard instead. As if wearing costumes of yellow spandex and glitter while tossing six-foot metal poles with red flags was a better option. It seemed like a good idea at the time.

Rose and I were ugly, misfits. Most of the girls in color guard were social outcasts: frumpy girls too fat or too awkward for cheerleading. They became flag twirlers, “chicks with sticks.” I remember how much the bus would stink with our sweat and girl smells, the odor of panty hose and too much eye shadow, coming home from cavalcades in the fall. The seats were made of a sticky material, and Rose and I would be squished in the small space, sitting beside each other. We would each have a headphone from my Walkman on, listening to Björk and trying to drown out the chatter of thirty girls talking about the new cute boy in the trombone section. The other girls knew we were weird and kind of left it at that. They didn’t like me because I refused to wear makeup. The captain of the squad, a short, fat girl with greasy brown hair, would yell at me as she wielded red Maybelline lipstick. “It’s part of the costume,” she’d hiss, “You have to wear it.” I finally conceded and let them smear the cheap colors on my face, only to get back at them the next week when I came to practice with my hair dyed blue with Manic Panic. It was the week before championships, and our coach cried when she saw me. “What are we going to do?” she sobbed, pointing at me like I had lost an appendage, as if I was completely incapable of spinning a flag now that my hair was blue. We borrowed a scratchy brown wig from the theater department and I had to be very careful not to turn my head too fast, lest the synthetic locks go flying off my head and land on the fifty-yard line as I marched past, performing a flag routine to some Gershwin song. Rose and I came to enjoy being the social outcasts of color guard. It was an extra badge of strangeness for us.

Besides, Rose and I were deep, much deeper than those other girls who read YM and wore sweaters from the Gap. Rose and I were into poetry, we would read e. e. cummings to each other over the phone, part of long marathon conversations about the meaning of life. We were fifteen, we were invincible, we were enlightened. I would get off the yellow school bus and run home, dropping my schoolbag and picking up the phone as soon as I came in. I would always lie on the gray carpet in the family room as we talked for hours. My brother would play Nintendo and sometimes scowl at the weird things I said about true love and art and suffering. Rose had spent a few months in a mental hospital when she was younger, so she was my idol as far as real-life drama went. She never really told me why, kept the story mysterious, only saying that one day in the car with her mother she said something about death that caused her mother to drive her straight to the psychiatric ward of the local state hospital. I was fascinated. Rose was my Sylvia Plath, my muse and my heroine. As we trundled through the muddy waters of adolescence, I could tell Rose anything I felt, and she would agree, validating my virgin emotions. It was in all this intensity that I fell in love with her.

Rose had a boyfriend. He was kind of pudgy and had a really annoying laugh. They would hold hands as we walked around the mall, drinking milk shakes from the Dairy Queen. I didn’t like it when they held hands. Her boyfriend couldn’t understand how deep Rose and I were. I humored him because Rose did.

“Do you love him?” I would ask on the phone, watching the blocks of sunlight that came in through the window make patterns on the carpet. Rose would sigh dramatically.

I nodded emphatically. I understood love. Rose and I had charted the entire emotion out in terms of desire, affection, and completion. Solitude was to be savored, but being in love was a privilege.

It was this concept of affection that stalled our philosophies on love and intimacy, because I hadn’t been kissed before. Once a boy at the roller rink in the seventh grade tried to kiss me, but I turned my face away and mumbled something about having a cold. There was something about boys I just didn’t want. I would act like I wanted them, imagine that somewhere in the world there was a sensitive boy with long hair who played guitar and read books on feminism, and he would be my boyfriend. Then I would kiss boys. But at a high school where the homecoming football games were so big the whole town shut down for the occasion, I wasn’t holding my breath on finding a sensitive, artistic boyfriend anytime soon.