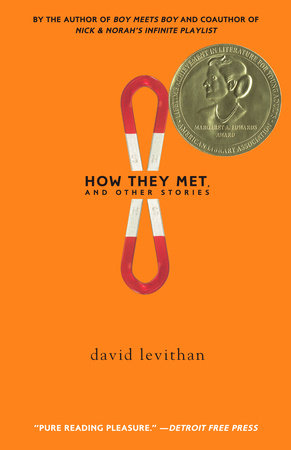 How They Met and Other Stories

By David Levithan On Tour
Just in time for Valentine’s Day comes a confection from David Levithan that is sure to have fans of Boy Meets Boy eager to devour it. Here are 18 stories, all about love, all kinds of love. From the aching for the one you pine for, to standing up and speaking up for the one you love, to pure joy and happiness, these love stories run the gamut of that emotion that at some point has turned every one of us inside out and upside down.

What is love? With this original story collection, David Levithan proves that love is a many splendored thing, a varied, complicated, addictive, wonderful thing.
Read more
Read less
Read Excerpt
+ Add to My Bookshelf
+ Add to Goodreads

How They Met and Other Stories

It was my aunt who pimped me out.
We had this arrangement: I would get to live with her for a few weeks over the summer and take a pre-college course at Columbia before my senior year. In return, I wouldn't have to do a thing besides stay out of the way. It sounded like a good plan to me, except that when I got to Columbia on the first day of summer classes, I found that my course had been dropped. Apparently, there'd been a notice that nobody in my family had bothered to notice.
I thought Aunt Celia would be mad. Or at least concerned. But instead she said, "Well, this could actually solve Elise's problem."
Elise was a friend of Aunt Celia's who lived in the same apartment building. She had a six-year-old daughter.
"I'm sure you're wonderful with children," Aunt Celia told me.
This was an especially strange statement coming from Aunt Celia, who (as far as I could tell) considered the continued existence of children to be something akin to a plague. We have a picture we love to look at in my immediate family, taken right after my brother, Jonathan, was born. It's Aunt Celia's turn to hold him, and from the look on her face and the positioning of her body, you'd think that someone had asked her to cradle a ten-pound turd. Nothing personal against Jonathan--I'm sure she was the same with me. As Jonathan and I grew up, Aunt Celia always gave us presents to "save for later." For my seventh birthday I received a pair of Tiffany candlesticks. For my eighth, it was a matching finger bowl. I freaked out, thinking a finger bowl was meant to hold fingers. (Aunt Celia left the room so my parents could explain.) When I turned thirteen, Aunt Celia actually seemed relieved. She finally stopped maintaining any pretense of treating me like a child, and started treating me like a lesser form of adult instead.
"Aren't you?" she now prompted. "Wonderful? With children?"
I didn't know where we were going with this, but I was sure that if I had no reason to stay in New York, Aunt Celia would ship me back to suburbia faster than she could dial out for dinner. Even if I found a way to avoid being underfoot, she would be unnerved by the concept of me being underfoot.
"I'm wonderful with children," I assured her. Various instances of me "babysitting" Jonathan flashed through my head--we hadn't been allowed to have pets, so I'd often encouraged him to act like one. I thought it best not to mention the particulars of my sitting experience, which, at its most extreme, stopped just short of accidental lobotomy.
"Perfect," she said. Then she picked up her cell phone off the front table, speed-dialed, and told the person on the other end, "Elise, it's Celia. I have a solution for the whole Astrid affair. My nephew . . . yes, Gabriel. The one I was telling you about. . . escaping my sister, yes. Well, it seems that his course has been canceled. And I happen to know he's wonderful with children. A complete charmer. . . . Yes, he's entirely free. . . . I'm sure those hours would be fine. . . . He's delighted. . . . You'll see him then. . . . Yes, it's quite a loaded potato. . . . Absolutely my pleasure!"
She hung up and looked at me like I'd just been checked off a list.
"It's all set," she said. "Although you'll have to dress nicer than that."
"What's all set?" I asked. If I couldn't do it in a T-shirt, I was worried.
"Why, your job. For the next three weeks."
"Which is . . . ?" I coaxed.
She sighed. "To take care of Elise's daughter, Arabella. You'll love her. She's wonderful."
No follow-up questions were possible. With an air kiss and a trail of perfume, Aunt Celia was off.