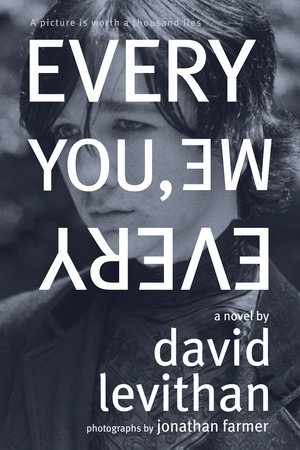 Every You, Every Me

By David Levithan and Jonathan Farmer
In this high school-set psychological tale, a tormented teen named Evan starts to discover a series of unnerving photographs—some of which feature him. Someone is stalking him . . . messing with him . . . threatening him. Worse, ever since his best friend Ariel has been gone, he's been unable to sleep, spending night after night torturing himself for his role in her absence. And as crazy as it sounds, Evan's starting to believe it's Ariel that's behind all of this, punishing him. But the more Evan starts to unravel the mystery, the more his paranoia and insomnia amplify, and the more he starts to unravel himself. Creatively told with black-and-white photos interspersed between the text so the reader can see the photos that are so unnerving to Evan, Every You, Every Me is a one-of-a-kind departure from a one-of-a-kind author.
Read more
Read less
Read Excerpt
+ Add to My Bookshelf
+ Add to Goodreads

Every You, Every Me

It was your birthday. The first one after you [left vanished] were gone.

When I woke up, I [dreamed] thought about other birthdays. Ones where we'd been together.

Like two years ago. Freshman year. [When I had you all to myself.] I asked you what you wanted and you said roses, and then you said, "But not the flowers." So I spent weeks gathering presents: a polished piece of rose quartz, White Rose tea, a ceramic tile I'd bought at the White House in fourth grade featuring the Rose Garden. A novel called Rose Sees Red, a biography of Gypsy Rose Lee, a mix of songs by bands called Blue Roses, the Stone Roses, White Rose Movement. Then I rigged your locker with pulleys, so when you opened it, all the objects rose. I'm not sure you got that part, not until I told you. But you were so happy then. [This was before happiness became so complicated. This was when you could ask me for something, I could give it to you, and the world would be right.]

Now it was a year later. I wished you a happy birthday. [That word again. Happy. It's a curse. The pursuit of happiness makes us deeply unhappy. It's a trap.]

Before anything else happened, there was me in bed, thinking of [who] you [used to be].

I don't want you to think I forgot.

I see too many things at once. I notice shadows. Think about them. And while I do that, I miss other things. Important things. I can't stop looking, even when I [want to] have to stop. I get lost in ifs. They are always there [if if if if] and I should only be able to tune in to them if I'm on the right frequency. But that's the thing about me: The frequencies don't divide.

[That day was your birthday in my head, but it wasn't really your birthday anywhere else.] I wanted to tell people at school that it was your birthday [but I didn't want to get their reaction when I brought it up]. I started to think it was like a surprise party, only they weren't telling either of us. They were going to surprise both of us. [I didn't have this thought for long. It was really just there for a moment.] I pretended like it was a normal day [without you there]. And like all other normal days, I made it through to the other end. [It can be done, you see.]

There are things you decide [and there are decisions you don't even know you are making]. That afternoon, I decided to cut through the woods on my way home. [As I headed that way, I looked at the ground, not the branches or the sky. If I'd stopped to talk to someone after school instead of heading straight home--if I'd had someone to talk to--maybe someone else would have gotten there first. I didn't decide to see the envelope.] I saw the envelope sitting there on the ground. [I should have left it alone. I should have been left alone. I was alone.] I stopped and picked it up. From the weight, I knew there was something inside. I decided to open it.

[I wasn't thinking of you.]

It was so small. I had to focus. I couldn't focus without telling myself to focus. [The eyes take in the colors and the shapes. The images go to the brain for translation.] First I saw the trees, then the sky. It didn't look familiar. [The brain cross-checks the translation against the memories it's stored.] I fixed on the four bare trees, standing like orphaned table legs. I knew those trees--I looked away from the photo and there they were in real life, no more than twenty feet away from me. I walked over to the nearest tree, but that didn't tell me anything. I looked at the envelope, but it was completely blank. [No address, no name on the front. I looked.] I almost put it back. But the sky was getting gray, almost as gray as the sky in the photo. Leaving it on the ground didn't seem right. It was going to rain.

I turned around and saw my school. Its windows. Watching me.

I put the photograph back in the envelope. [I didn't put the envelope back on the ground.] I kept it. And I might have forgotten about it. I might have just thrown it out, or let it stay in my backpack until it became crumpled and torn and wrecked on the bottom with all the pieces of unchewed gum slipped loose from their wrappers. I might have just shown it to Jack or someone else the next day at school. [In another time, I would have shown it to you first.] We would have shrugged and moved on to the next thing. It would have been a short, short story.

Random, we would have said.

Completely without a pattern.

Completely without a recognizable pattern.

Either the event is outside any pattern.

We are unable to comprehend the pattern.]

I folded the envelope in half, careful that the photo wasn't caught in the crease.

(I try to be a careful person. Most of the time my carelessness is completely unintentional.)

I looked around one more time, stood in the center of the bare trees, at the exact center.

Then I headed home and I lost focus and the barrage in my head started again.

[You will never be happy again. Why do you even think about it?]

Five minutes after I picked up the photo, it rained.

[This pain is all that you have.]

If I'd been five minutes later, none of this would have happened.

It probably would have happened anyway. Just not like this.

I woke up at two in the morning, feeling guilty that I hadn't asked you what you wanted this year.