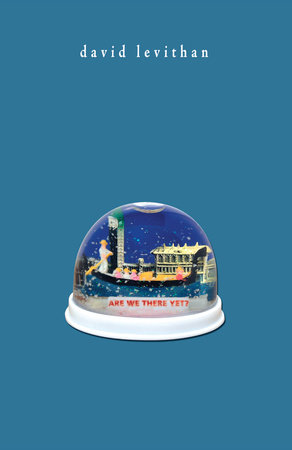 Are We There Yet?

By David Levithan On Tour
Sixteen-year-old Elijah is completely mellow and his 23-year-old brother Danny is completely not, so it's no wonder they can barely tolerate one another. So what better way to repair their broken relationship than to trick them into taking a trip to Italy together? Soon, though, their parents' perfect solution has become Danny and Elijah's nightmare as they're forced to spend countless hours together. But then Elijah meets Julia, and soon the brothers aren't together nearly as much. And when Julia suddenly decides that maybe it's Danny she's really interested in, Danny has a decision to make: does he honor his relationship with the brother he thinks hates him, or does he follow his heart, which sorely needs some repairing of its own?
Read more
Read less
Read Excerpt
+ Add to My Bookshelf
+ Add to Goodreads

Are We There Yet?

By David Levithan
I. DEPARTURE


The phone rings at an ungodly hour. Elijah looks at the blur of his clock as he reaches for the sound. Eleven in the morning on a Saturday. Who can be calling him at eleven in the morning on a Saturday? Cal, his best friend, stirs from somewhere on the floor. Elijah picks up the phone and murmurs a greeting.
"Oh goodness, did I wake you?" Elijah's mother asks, her voice so much louder than the dream he'd been having.
"No, no," he says, disguising his own voice to sound awake. "Not at all."
"Good, because I have some great news for you. . . ."
His mother is talking about Italy and Elijah's brother Danny and luxury accommodations. He thinks his brother has won a prize on a game show or something. Cal starts hitting his sneaker like it's a snooze button. He tells her to go back to sleep.
"What did you say?" his mother asks. "Will you go?"
"Does Danny want me to go?"
Elijah doubts highly that Danny wants him to go.
"Of course he does."
Elijah still doubts that Danny wants him to go.
Cal is awake now, rubbing her eyes. Elijah's boarding school frowns on having overnight guests, but Elijah doesn't really care if it frowns.
Elijah covers the receiver and whispers to Cal, "It's my mom. I think she wants to know if I want to go to Italy with my brother."
Cal shrugs, then nods.
That's enough for Elijah.
"Sure, Mom," he says. "And thanks."


Elijah always says thank you, and oftentimes says please.
"You're such a relic," Cal will taunt him playfully.
"Thank you," Elijah will reply.
Elijah learned quickly that saying thank you garners a variety of reactions. Some people (like his brother) can't handle it. Other people (like Cal) are amused. Most people are impressed, whether consciously or not. He'll be offered the last slice of pizza, or the last hit from the bong.
"You're a relic, not a saint," Cal will continue, dragging him to the next party, parties called gatherings, dances called raves. Where she leads, he will follow. She tousles his blond-brown hair and buys him blue sunglasses. He playfully disapproves of her random boyfriends and girlfriends, and gives her flowers for no reason. They smoke pot, but not cigarettes. At the end of most parties, they can be found woozily collecting cans and bottles for the recycling bin.
Elijah had planned to spend the summer hanging out with Cal and their other friends in Providence. At first, his parents weren't too thrilled about the idea. ("Hang out?" his mother said. "Sweetheart, laundry hangs out.") Now he's being sent to Italy for nine days.
"I'm going to miss you," Cal says a few nights before Elijah is scheduled to leave. They are walking home from a midnight movie at the Avon. The June night is warm and cool, as only June nights can be. The air is scored by the faint whir of cars passing elsewhere. Elijah inhales deeply and takes hold of Cal's hand. Her hair--dyed raven black--flutters despite itself.
"I love it here," Elijah says. He is not afraid to say it. "I love it here, this moment, everything." He stops looking at the sky and turns to Cal.
"Thank you," he whispers.
Cal holds his hand tighter. They walk together in silence. When they get back to school, they find four of their friends on the common room's lime-green couch. Mindy, Ivan, Laurie, and Sue are playing spin the bottle--just to be playful, just to be kissed. The moment shifts; Elijah is still happy, but it's a different happiness. A daylight happiness, a lightbulb happiness. Cal arches her eyebrow, Elijah laughs, and together they join the game.
Elijah is the first to grow unconquerably tired, the first to call it a night. Cal is still laughing, changing the CD, flirting with the lava lamp. Elijah says his good-nights and is given goodnights in return. The world already misfocusing, he makes his way to bed.
Ten minutes later, there are two knocks from the hallway. The door opens and Cal appears, brightness behind her. It is time for their ritual, their nightly ritual, which Elijah thought Cal had forgotten. Sometimes she does, and that's okay. But tonight she is in the room. Elijah moves over in his bed and Cal lies down beside him.
"Do you wonder . . . ?" she begins. This is their game--Do you wonder? Every night--every night when it's possible--the last thing to be heard is the asking without answer. They stare at the glow-in-the-dark planets on the ceiling, or turn sideways to trace each other's blue-black outlines, trying to detect the shimmer of silver as they speak.
This night, Cal asks, "Do you wonder if we'll ever learn to sleep with our eyes open?"
And in return, Elijah asks, "Do you think there can be such a thing as too much happiness?"
This is Elijah's favorite time. He rarely knows what he is going to say, and then suddenly it's there. Above them. Lifting.
A few minutes pass. Cal sits up and puts her hand on Elijah's shoulder.
"Good night, sleep tight," she whispers.
"Don't let the bedbugs bite," he chimes, nestling deeper under the covers.
Cal smiles and returns to the party. Elijah rearranges his pillows and fits himself within the sheets. And as he does, he wonders. He wonders about goldfish asleep with their eyes open. He wonders about Italy, about his parents, about whether the stars will be brighter in Venice. He hears voices at a distance, the lively sound of voices from the common room. Like the spots of color whenever he closes his eyes. He closes his eyes. He thinks about what a wonderful friend Cal is. How lucky he is to have such friends, all of his friends. He is happy. He is almost empty with happiness. . . .