Start Reading an Excerpt of Silver in the Bone by Alexandra Bracken Now!

> Discover > Articles > Start Reading an Excerpt of Silver in the Bone by Alexandra Bracken Now! 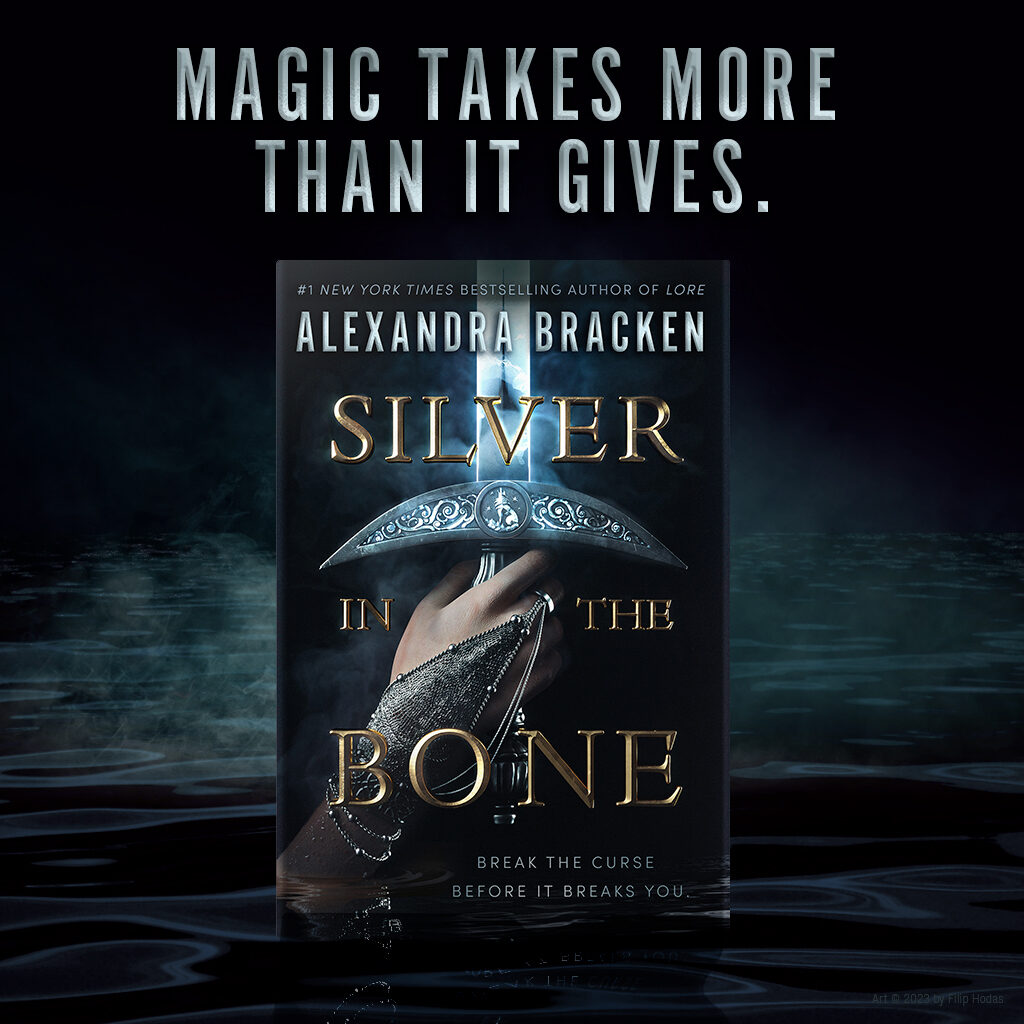 Tamsin Lark will stop at nothing to break the curse that torments her brother. Even if it means a race against time with thieves for allies and bloodthirsty sorceresses breathing down her neck every step of the way. . . .

Journey from the magical underground of contemporary Boston into the heart of Avalon as you’ve never seen it before, shrouded in mist and doomed by betrayal, both past and present.

But be wary, for magic always takes more than it gives.

Start reading an excerpt of Silver in the Bone now!

Silver in the Bone

The group spread out as we made our way through the trees.

Neve was at my back, her wand clutched in her hand. Cabell fell in place beside me, retrieving my axe from where it had been tied to my traveling pack.

I felt hyperaware of each step I took, not just because of the grasping mud but also the faint jangle of my belongings.

“There should be villages scattered around the isle,” Neve whispered.

“Are there any other landmarks we can look for?” I asked as quietly as I could.

“There’s a tower at the center of Avalon,” Neve said. “That’s where its order of priestesses is said to reside. The nine sisters.”

Right. Right, I’d seen that mentioned in a handful of the Immortalities, though, as the years had gone on and the generations of sorceresses had grown more distant from their ancestral home, the details around the priestesses had become just as inaccurate as most fairy tales.

As he moved ahead of me, my stomach cramped with the fetid smell, but there was nothing in it to throw up. I didn’t see Cabell through the wall of pale air until I’d nearly collided with his back.

My eyes slid left, following his line of sight, until, finally, I saw it too. A shifting shadow among the trees.

There was no moonlight to illuminate its form, but my sight had adjusted to the darkness, and even our distance couldn’t disguise the cold savagery of the creature tearing at the carcass of what had once been a horse.

It had the near shape of a man, but stretched and bent, its joints all harsh, unforgiving angles. The hairless limbs were overly long and spindly, the way a spider’s might be. For one terrible moment, I couldn’t tell if it was filthy rags or tattered flesh hanging from them.

What the hell is that?

Emrys and Neve came up behind us, their footsteps soft as they moved over the diseased lichen and unsteady ground. I held out both my arms, stopping them. Emrys sent me a questioning look, but I only pointed to his head lamp.

I knew the moment he saw the creature too. His body turned rigid. Holding his breath, he reached up slowly and clicked the light off.

The creature’s head shot up, blood and stringy muscle dripping from its mouth. Disgust and terror flooded my body, and any instincts I had to run, to fight, to do anything other than stand there vanished like breath in the air.

The creature’s face was sunken with decay, leaving a void of flesh and color, save for the white of its glowing eyes, and its bloodstained teeth. Teeth it had used to rip the flesh and muscle and innards of the horse away, reducing it to clean-picked bones in a pool of the animal’s own blood.

The creature rose, dropping the leg from its mouth. Its limbs unfolded like an insect’s, awakening some deep, primal fear in me. The mist rolled between us, but when it thinned again, the creature was gone.

“Where did it go?” Cabell whispered, breathing heavily.

“What the hell is that?” one of the Hollowers shouted. “What is it doing—?”

A piercing bark answered, not half as terrible as the ones that answered back from the darkness that surrounded us on all sides.

There was a soul-curdling scream. The Hollower’s head lamp beam vanished. Then another.

“Get back to the boats!” Septimus bellowed. “Now!”

Cabell and Neve rushed forward first, their feet slapping through puddles of water and sludge. Emrys stood stock-still, staring at the spot where the creature had been, rooted so firmly in place I had to grab his arm and yank with all my might to get him moving again.

Another head lamp gone. Another.

The mist swirled around us in chaotic patterns as the party rushed in every direction. I slammed into Neve, who had turned back at the water’s edge. I craned my neck around, following her terrified gaze.

A head, hairless and slick with sludge, rose from the putrid depths. Its eyes gleamed silver as they caught the light of a head lamp.

And then it wasn’t one, but many. The filmy water bubbled as they emerged from the dark depths and floated toward us.

Cabell grabbed my shoulder, drawing me closer to his side as he held out my axe. “What the hell do we do?”

I shook my head, choking on words that wouldn’t come. There was no way back to the barges. No way forward.

There was only the slick crackle of flesh rent from bone, and the helpless screams as one by one the lights vanished, and the mist devoured us whole.

Silver in the Bone

#1 New York Times bestselling author Alexandra Bracken cements her status as one of the top fantasy authors writing today in this stunning series opener inspired by Arthurian legend and fueled by love, revenge, and pure adrenaline!

Tamsin Lark didn’t ask to be a Hollower. As a mortal with no magical talent, she was n...

Did you enjoy this excerpt of Silver in the Bone by Alexandra Bracken? Get social with us at @getunderlined!

Who killed Brooke Donovan? Everyone in Castle Cove thinks they know what happened. But they're wrong.

Read An Exclusive Excerpt of Nubia: The Awakening by Omar Epps and Clarence A. Haynes